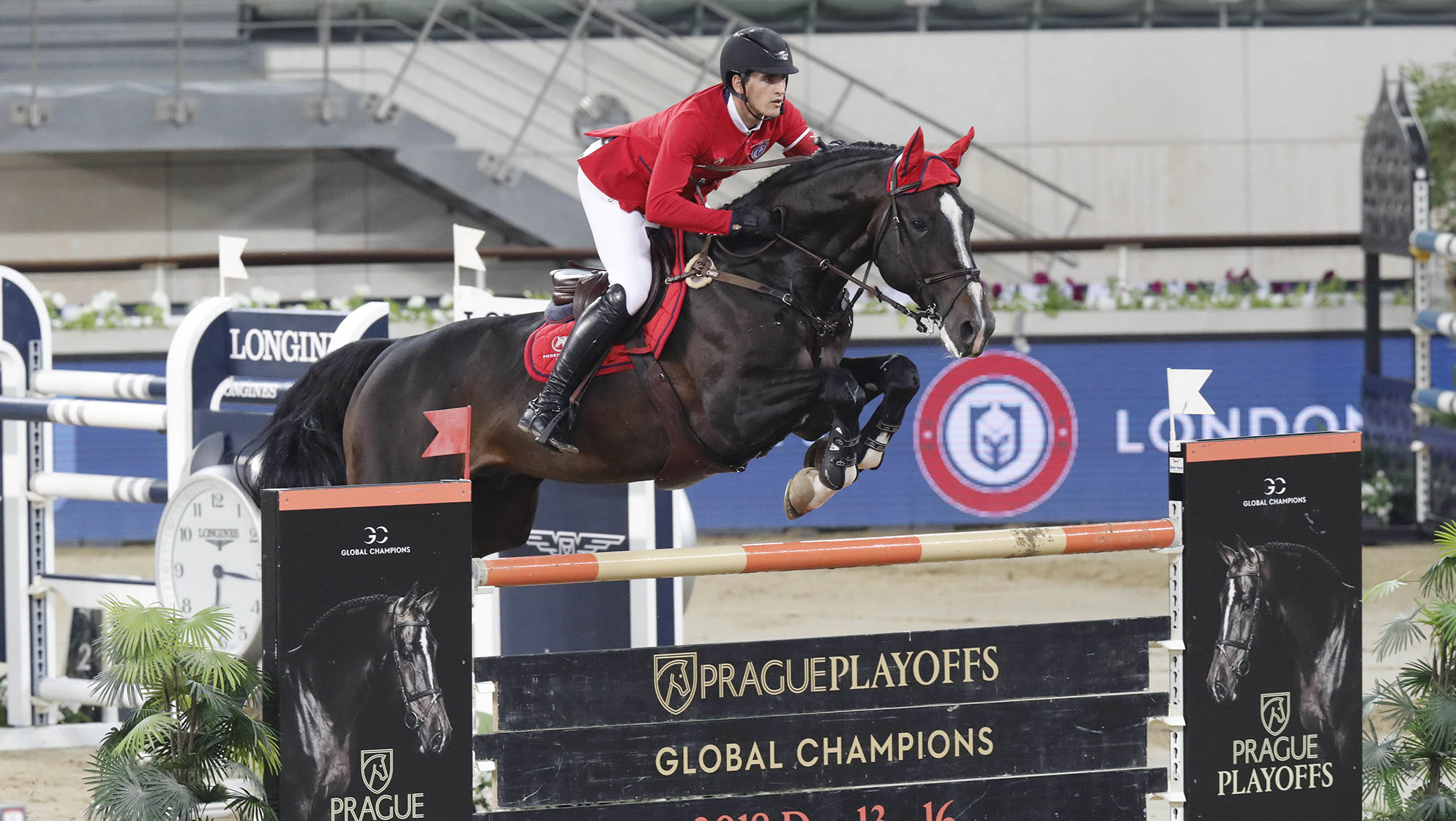 London Knights threw down the gauntlet to their closest rivals today, executing powerful double clears in the opening round of the high pressure finals of the 2018 GCL Team Championship.

Nerves were clearly on edge in the high stakes competition ahead of Saturday’s showdown to decide which teams go to the GCL Super Cup at the new GC Playoffs with over €10 million in prize money.

Calculations were rife as GCL team riders, managers and owners worked out where they needed to finish to achieve the best possible shot at the Playoffs on Saturday. The top teams had their sights on finishing in the top four of the overall ranking ensuring they are fast-tracked to the semi finals of the Playoffs avoiding the quarter final stage. Only 16 out of 19 teams go to the Playoffs and there was a desperate battle to avoid the relegation zone.

The Knights’ formidable duo of Ben Maher and Nicola Philippaerts stayed cool and ended on a clean score sheet in the fastest combined time to put them into pole position for Saturday’s major contest. They have been leading the season ranking consistently and are currently 23 points ahead of Valkenswaard United. Ben said: “It was a perfect start to the weekend. It was quite a big course today for that first round, but we had a good plan and we have great horses in the team.”

Rome Gladiators were the only other team to achieve double clears with no time penalties in Doha thanks to high calibre performances from Laura Kraut and Lorenzo de Luca putting them in second spot on the grid. De Luca said: “We really needed this result and look forward to Saturday for a good end to the Championship. Our goal of the weekend is to fast track to the semi finals (at the Playoffs) and that is why we borough our three best horses.”

The clock is now ticking and the teams have less than 48 hours to make strategic decisions on which riders and horses they will field in the GCL Round 2 on Saturday at 14:30 local time.

The impressive AL SHAQAB arena in Doha, Qatar, was under floodlights and the vast 120m x 80m sand arena was set with Uliano Vezzani’s deceptively challenging course including some substantial overs and several tall and delicate verticals.

First in were the Prague Lions lying in 10th place on the overall ranking. But it was a hugely unexpected disappointment for Peder Fredricson and Hansson WL, one of the top performing horses in the GCL season. They finished on 8 faults and team mate Niels Bruynseels and Delux van T & L clocked up 5 putting them on a total of 13.

Chantilly Pegasus are on the edge of the relegation zone and every point was crucial. Roger-Yves Bost had 9 faults on Castleforbes Talitha, but team mate Carlos Lopez on Hooligan de Laubry pulled off a much-needed clear round with one time penalty for a total of 10.

Paris Panthers, in 14th place on the overall ranking, benefitted from a superb clear round from Gregory Wathelet on Qualido 3 followed by Yuri’s Mansur on four faults. It was to be a disappointing outing for Athina Onassis of St Tropez Pirates after her talented ride MHS Going Global put in a dramatic refusal leaving her on 15 faults and team mate Edwina Tops-Alexander on 5 faults. But their current 8th position in the ranking ensures qualification for the Playoffs.

Cascais Charms and Hamburg Giants suffered heavy scoring rounds leaving them in perilous positions at the bottom of the ranking. It was not a happy result for Valkenswaard United, although second in the overall ranking, Zorzi on Contanga 3 clipped the first part of the GCL double combination in common with several other riders and Ehning on Funky Fred had four faults at the tall vertical near the end of the course. Ehning said: “Yes it is pressure. But we are used to this pressure and I have hope for Saturday.”

Ranking leaders London Knights faced down that pressure in emphatic style. Nicola Philippaerts and H&M Chilli Willi powered round the course with perfect strides for a brilliant clear. And Ben Maher and the acrobatic Explosion W sealed their lead on the day with a masterful clear round. With four GCL wins under their belts this season Nicola said: “The Knights team was great again today. Ben finished it off again with his great horse and hopefully we do good again on Saturday.”

Shanghai Swans’ Daniel Deusser and Shane Sweetnam finished on a combined score of 5 faults keeping them in contention at the top of the grid along with Monaco Aces’ Julien Epaillard and Jerome Guery also on 5 faults. There were disappointing scores for Berlin Eagles, Montreal Diamonds, New York Empire and Cannes Stars, with Madrid in Motion and Scandinavian Vikings living to fight another day in the middle of the grid.

Miami Celtics’ Jessica Springsteen on RMF Swinny du Parc rode a superb clear round and with team mate Michael Duffy on Egalini riding clear but with one time penalty they are well placed for Saturday’s big contest.

The focus will now be on which teams will change horses or riders ahead of Saturday's showdown, the last chance for the teams to move up, or down, the overall rankings for 2018.