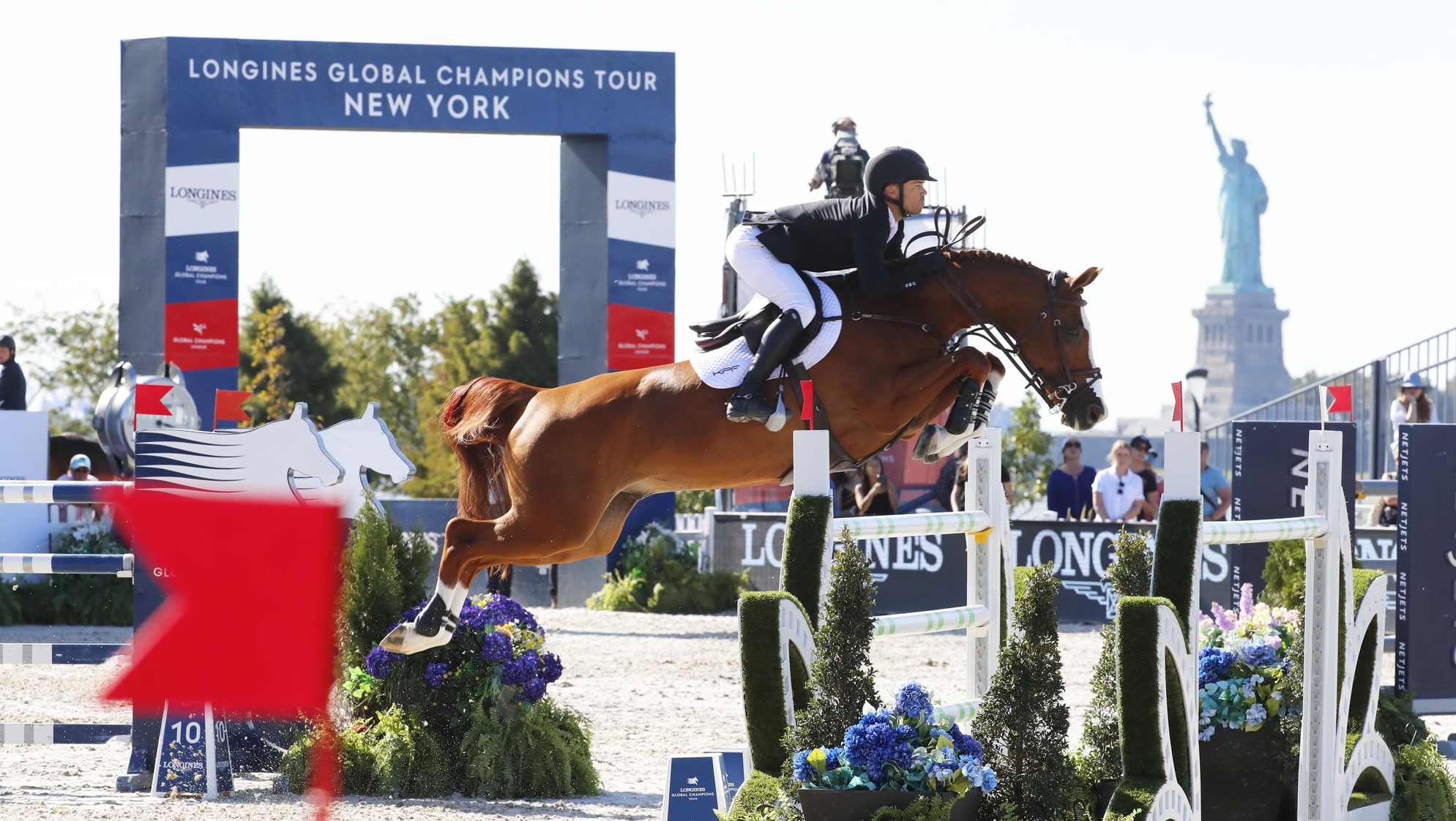 As the sun set behind the Statue of Liberty and "The Star-Spangled Banner"​ rang out, Kent Farrington and Creedance flew the flag for the United States of America in the closing 5* thriller in New York.

The American champion’s win was a fitting climax to the sensational inaugural LGCT and GCL Finals on Governors Island and Kent said of the event: “[It’s an] amazing setting, one of the best shows they’ve had this year and great finale to the Tour. [It’s been a] great week, amazing competition, top riders, top horses - you can’t ask for more.”

Determined to be back for next year’s LGCT of New York he added: "I brought two amazing horses here - I thought they were good contenders. I was very happy Creedance was able to win two. I would have liked to get the Grand Prix also but I’ll be back next year for that."

After three days of top sport, entertainment and perfect weather, the crowds and guests left the showground to the iconic music of Frank Sinatra's 'New York, New York'. The New York stage of the team and individual championships saw Ben Maher crowned LGCT Champion repeating last year’s success and London Knights, including Maher, winning the GCL Final. Michael Bloomberg, Donna Karan, Christy Turlington and Longines Ambassador of Elegance Andre Agassi were among guests for the first-ever leg of the series in New York.

The final day of competition at the Longines Global Champions Tour of New York provided another spectacle of high calibre show jumping. Uliano Vezzani’s final course of the weekend was a flowing challenge with plenty of unrelated distances meaning it would suit multiple horses and riders. A wide NetJets oxer was a formidable feat, a JustWorld International water-tray lined oxer also caught the eye of a few and the iconic Empire State Building / Statue of Liberty vertical made its final appearance of the weekend.

First Round
Marco Kutscher (GER) and his 10-year-old gelding Casallvano were the pathfinders for the class, the pair delivering a smooth round to produce a clear much to the delight of the crowd. American hopes were lifted after next to go Andrew Kocher (USA) and Squirt Gun pulled off an emphatic clear, creating a jump-off and looking to fly the flag on the podium today.

But it would be an opening few rounds of extremes - with Leopold van Asten (NED) and VDL Groep Elexia, Alberto Zorzi (ITA) with Cinsey and Olivier Philippaerts (BEL) with Cigaret JVH Z all retiring from the class.

American hopes of a home win would soar higher still after Kent Farrington (USA) and his fiery chestnut Creedance added their names to the line-up, the former World Number 1 always a danger in a turbo-charged jump-off. He was quickly joined by Julien Epaillard (FRA) with Alibi de la Roque, Martin Fuchs (SUI) with The Sinner and Scott Keach (AUS) with his Olympic horse Fedor.

There was disappointment for Marcus Ehning (GER) and A La Carte NRW after fence 8 - the yellow oxer falling after the horse dropped off the bit at the last stride and punched out the first rail of obstacle. American star Jessica Springsteen (USA) and RMF Swinny Du Parc had an unlucky fence, the 13-year-old bay mare just tipping a pole and ruling them out of the jump-off.

Pieter Devos (BEL) and his 15-year-old gelding Espoir produced yet another flawless round, adding their name to the jump-off. They were joined by Simon Delestre (FRA) with Filou Carlo Zimequest, Peder Fredricson (SWE) with Zacramento, Christian Kukuk (GER) with Colestus, Niels Bruynseels (BEL) with Kopernic van Orti and Harrie Smolders (NED) with Cas 2.

There was heartache for Margie Goldstein-Engle (USA) and Royce after an early fence fell, and poles fell all around the arena for the likes of Abdel Saïd (EGY) with Axel 111 Z, Constant van Paesschen (BEL) with Vendetta Treize and Jur Vrieling (NED) with Comino.

But it would be a 15-rider jump-off with Darragh Kenny (IRL) with Scarlett du Sart Z, Georgina Bloomberg (USA) with Chameur 137 and Emil Hallundbaek (DEN) with Chalisco all in the mix.

Jump-Off
First to return, Marco Kutscher (GER) and Casallvano turned back tight to the green and white double, but the back rail of the oxer fell, dropping them out of a chance of the win today. Andrew Kocher (USA) and Squirt Gun kept it careful, but the NetJets fence fell - they too out of a chance today.

Winner of the speed class earlier on today, Julien Epaillard (FRA) set off at a pace with Alibi de la Roque, but they too fell short at the green and white oxer, the front rail falling as they came in a little too deep.

The crowd cheered in appreciation as Kent Farrington (USA) and Creedance returned to the ring. They took a sharp angle to the first fence and absolutely rocked around the track. They recovered well after a slight stumble following the LGCT oxer, and took an incredible turn to the Longines vertical. The duo powered to the finish, setting the time to beat at 36.76s.

There was disappointment for Martin Fuchs (SUI) and The Sinner after the second part of the double fell, and the final fence - the NY silhouetted oxer - also tumbled to keep them out of the prize money today. Scott Keach (AUS) and Fedor had the LGCT oxer down, they too out of a chance of the win today.

Pieter Devos (BEL) and Espoir put in a class performance, the experienced gelding flying as they pushed on to better Farrington’s time. But it wasn’t to be, and despite their clear the pair would have to settle for 37.82s and just behind the American rider.

The troublesome green and white double claimed both Simon Delestre (FRA) with Filou Carlo Zimequest, and Peder Fredricson (SWE) with Zacramento - two big names out of the running.

Christian Kukuk (GER) and Colestus knew they wouldn’t be able to match the time of Creedance, with Kukuk giving the stallion a little extra time to the fences to ensure they would all stay up. They finished clear, but much slower in 43.56s. Two fences for Niels Bruynseels (BEL) and Kopernic van Orti would mean they would return home empty handed.

Harrie Smolders (NED) and Cas 2 put in a valiant try, shifting up a gear in a flat out gallop to the last. But they couldn’t quite catch the American rider - flying through the finish in 38.19s. Darragh Kenny (IRL) and Scarlett du Sart Z came undone at the NetJets fence, with two contenders left for today’s win.

Cheers erupted once more as Georgina Bloomberg (USA) and Chameur 137 entered the ring. The pair blitzed around the track, the 11-year-old bay gelding jumping his heart out for the American rider. They kept every fence up, stopping the clock in 41.67s to finish fourth.

The final rider to go Emil Hallundbaek (DEN) and Chalisco looked quick across the ground but the pesky green and white double claimed it’s final victim, the pole falling and handing the win to American superstar Kent Farrington (USA). ​