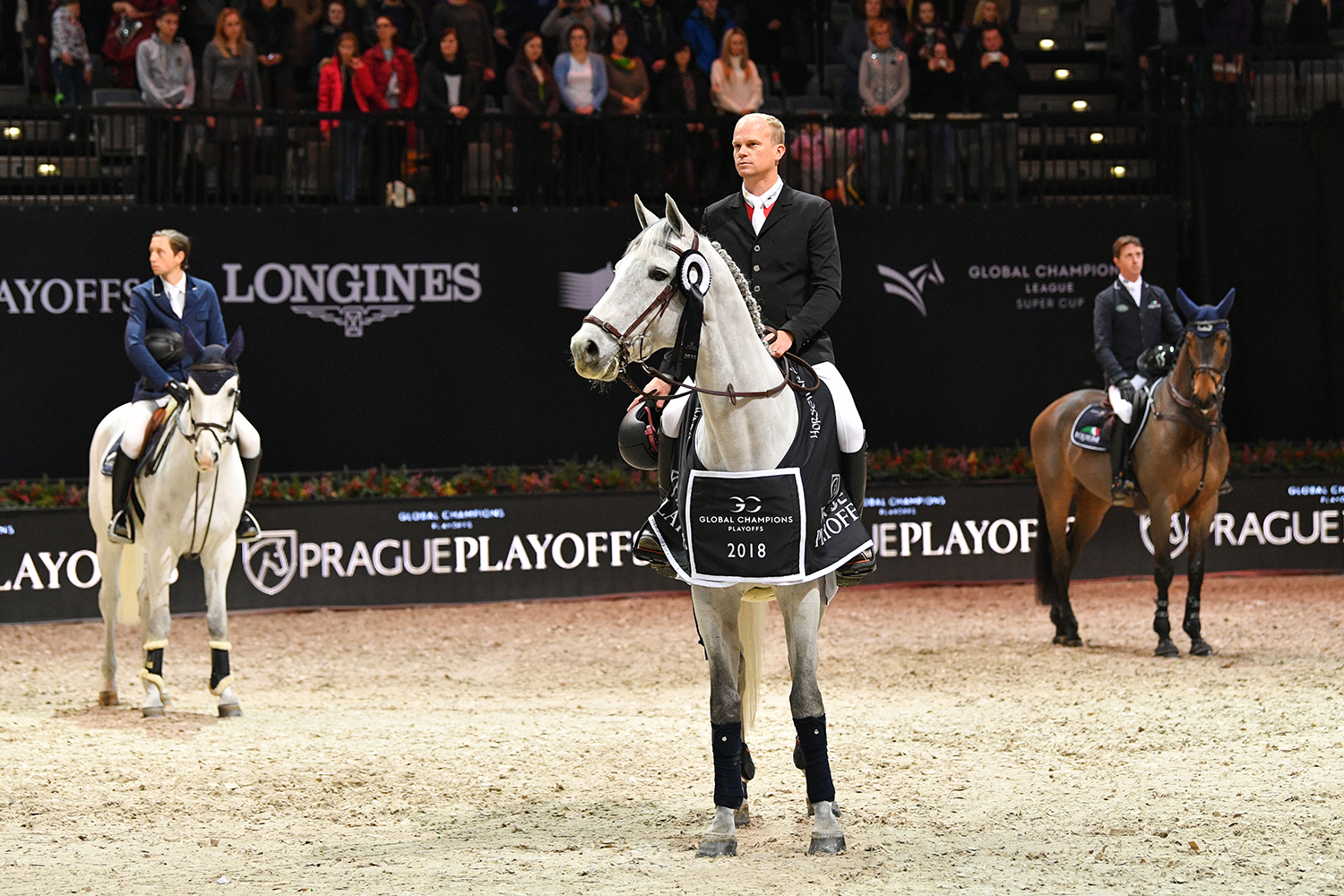 Jérome Guery (BEL) and Garfield de Tiji des Templiers powered to the top of the field this evening at the inaugural GC Prague Playoffs, winning the first class of the weekend just 0.22 seconds ahead of Piergiorgio Bucci (ITA) and Cochello (54.77 seconds). The duo were closely followed by Martin Fuchs (SWE) and Cristo (55.01 seconds) with many of the world’s top international horses and riders on phenomenal form for this weekend.

Uliano Vezzani pulled out a masterful first competition, producing a crafty course for the five-star riders in the opening speed class of the GC Prague Playoffs at the O2 Arena. Clearing the Rolls Royce vertical proved challenging as many riders attempted to roll back to next fence 9, the tightest turn of the course.

Calmly clearing all 14 fences, the power-house pair of Ben Maher (GBR) and Explosion W showed no signs of contesting the speed element of this class, banking a steady round to set up their weekend nicely.

One down and two time faults for #TheOneShotWonder Frank Schuttert (NED) and Chianti’s Champion meant they now look to tomorrow’s CSI5* 1.50m before the pressure intensifies in Saturday’s LGCT Super Grand Prix.

His lead was short lived when Martin Fuchs (SWE) and Cristo stumped up a clear round in 55.01 seconds, a whopping 9 seconds faster than Henrik. Seventeen riders later Jérome Guery (BEL) and Garfield de Tiji des Templiers would have the crowd on the edge of their seats.

Almost running into the white planks on his way to fence 9, Jérome and Garfield de Tiji des Templiers caught up the time on their way to the last fence the time to steal the lead on 54.55 seconds by 0.45 seconds.

There was high drama when World Number One Harrie Smolders (BEL) and Zinius went separate ways at the Rolls Royce fence. Thankfully he re-mounted to before exiting the arena and is ready for the Quarter Final tonight.

Flying around the course on Virtuose Champeix, speed demon Julien Epaillard (FRA) challenged Jérome’s lead but a rail at halfway point meant the pair eased the gas preferring to finish the course on four faults.