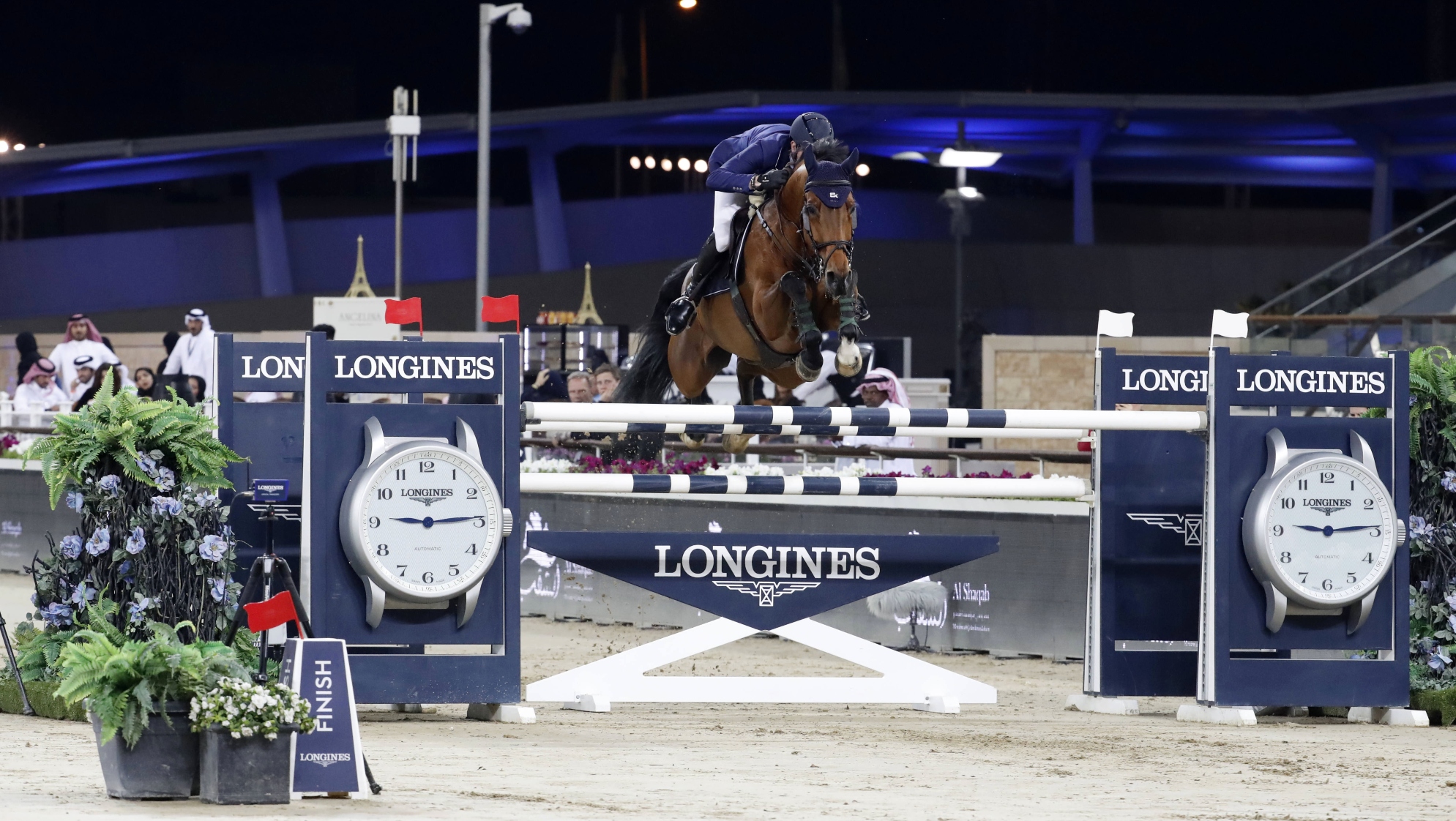 Daniel Deusser faced down Pieter Devos in a tense and tricky jump off setting the stage for a thrilling Super Saturday of the Longines Global Champions Tour Grand Prix and GCL Team showdown.

Deusser pulled off the only double clear of the night under floodlights in the dramatic Longines Arena at Al Shaqab, as spectators witnessed the world’s leading riders in action in Doha, Qatar.

Tomorrow sees the first LGCT Grand Prix of the season, and the first qualifier for a place in the LGCT Super Grand Prix at the GC Prague Playoffs in November. It will be all to play for at this early stage of the season, as the best of the best battle it out in another day of exciting competition.

Super Saturday in Doha will also play host to the finale of the GCL team competition, in the first event for the teams to secure the all important ranking places. St Tropez Pirates head to the second round in pole position, but with 8 teams on a clean sheet, the battle will be intense.

First into the arena for this tricky 1.50/1.55m CSI5* class was Cindy van der Straten (BEL) and Catalina. Cindy used all her skill to pilot her mare around Frank Rothenberger’s testing track, but the pair knocked one fence and were a little off the time to finish with 5 faults.

The clears weren’t forthcoming in the first round in this real test of accuracy and power, and with eight competitors having started, the clean sheets still proved to be elusive, with top riders like Olivier Philippaerts (BEL), Maikel van der Vleuten (NED), Shane Breen (IRE) and the winner of the day’s earlier 5* class, Jerome Guery (BEL) all falling foul of the tough fences around the course.

It was down to Emanuele Gaudiano (ITA), 11th to go, to break the mould and post the first faultless round, riding his impressive chestnut stallion Chalou. Following him into the arena was Evelina Tovek (SWE), but her luck ran out in the triple combination and she finished with Winnetou de la Hamente Z on 8 faults.

Francois Mathy Jr (FRA) was on flying form on Casanova de l’Herse, but unfortunately it wasn’t to be for this combination today, as they parted company, ending their bid for glory.

The next clear would go to Scott Brash (GBR) and Hello Shelby, the mare performing for Scott in this dramatic atmosphere to clinch the second clear round and move forward into the jump-off.

Following Scott’s example, Pius Schwizer (SUI) employed all his skill and accuracy with his key campaigner Cortney Cox to bring us the third clear round, and the run of good luck continued as Pieter Devos (BEL) with Espoir and Penelope Leprevost (FRA) with Varennes du Breuil also both secured their places in the jump-off.

Daniel Deusser (GER) was the sixth to move forward into the next round, keeping a clean sheet with his 10-year-old mare Kiana van het Herdershof. The seventh and final combination to reach the jump-off were Max Kuhner (AUT) and Vancouver Dreams, and the stage was set for a dramatic finale.

Emanuele Gaudiano and Kingston van het Eikenhof were the first to tackle the equally difficult jump-off round, but despite a good performance earlier on in their round, the combination were eliminated following a fall but both horse and rider walked out of the arena unscathed.

Scott Brash took a big risk coming in on 7 strides to the second fence, and continued the fast pace. He stayed on the outside of the Arabian coffee pot to get a good position into the double. He took a flyer to the final Longines fence and Hello Shelby stumbled over the back rail. Scott finished on 4 faults shaking his head in disappointment.

Next to go was Pius Schwizer, who had an early fault knocking the black GC upright, and then the first part of the Longines double came crashing down as Cortney Cox got a little flat, not picking up her front legs, and they finished on 8 faults.

Pieter Devos was the first to take the inside line to the Longines double and was looking on track to be the first clear until the final fence fell as Espoir left a hind leg behind causing the pole to fall.

Penelope Leprevost came a little too fast into the double and stumbled throughout, and she was lucky that the second part held on as the back rail jumped out of the cups but stayed in place, keeping her on 4 faults.

Next to enter the arena was Daniel Deusser and Kiana van het Herdershof, stretching over the combinations, taking smart turns but with a slower approach, to finish on a golden clear round and take the lead. His efficient approach resulted in the only clear in the jump off to seal the win. Deusser is now looking on formidable form for the GCL showdown and LGCT Grand Prix on Super Saturday.

Speaking after his win, Deusser said “In the first round the triple made it very difficult and in the jump off there were not many clears. My horse is a very careful horse and she respects the poles so much. We started well yesterday and I am in good form today, and I hope to do the same tomorrow”.

As the battle unfolded between the two powerhouse riders of Deusser and Devos, a fierce rivalry emerged here in Doha. Devos was significantly faster in the head to head but had 4 faults at the last, while Deusser achieved the only double clear to clinch the win in today’s competition, looking like a strong contender for Super Saturday.