“I love this horse!” Elated Robert Triumphs in Prelude to LGCT Cascais Showdown 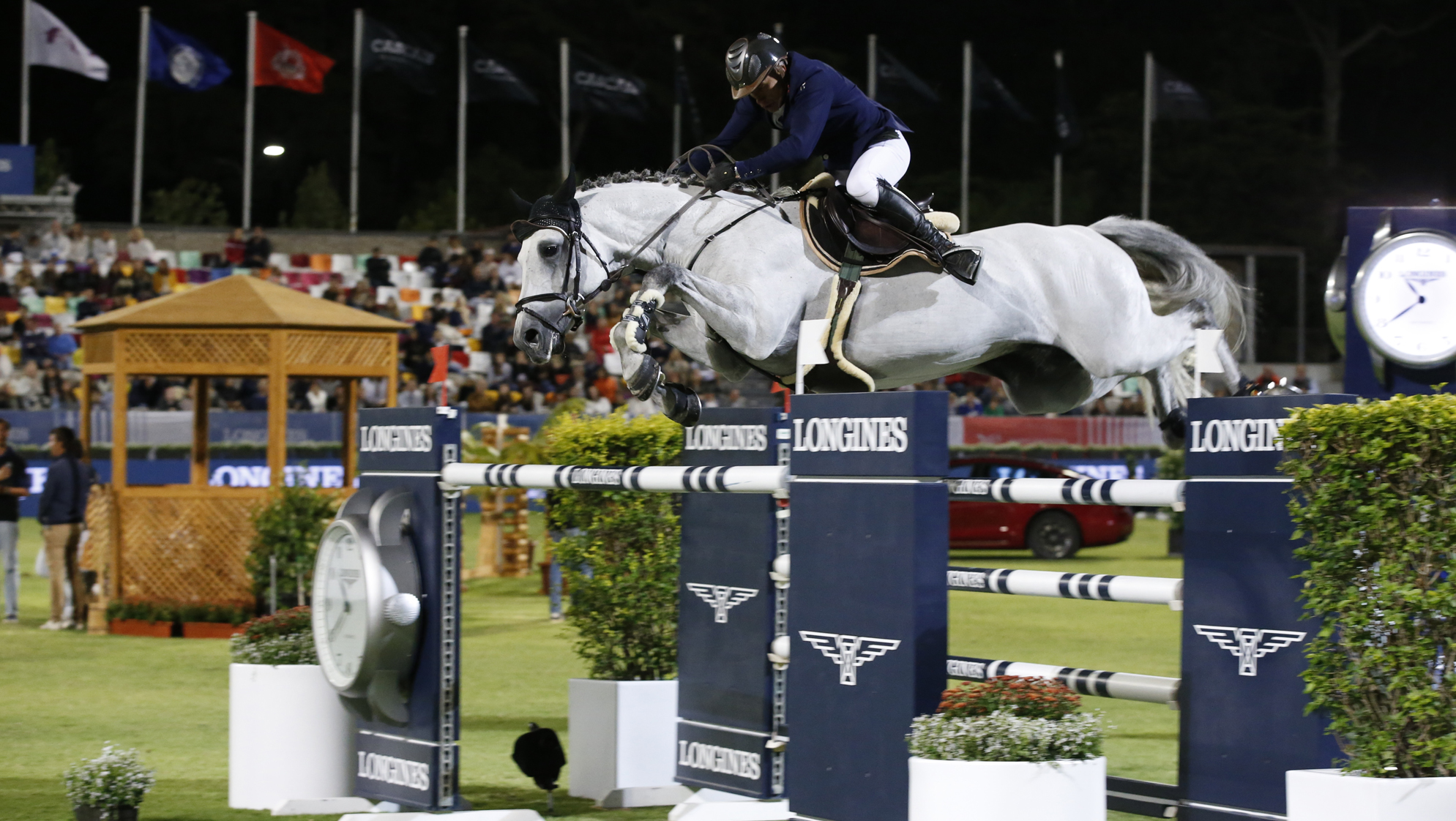 An emotional Olivier said: “My horse was super tonight. He’s had a rest and he’s just perfect for the big show. He’ll jump the big class in Monaco next week. He’s so smart, I let him go - he’s intelligent, I love this horse! I never win anytime, so I’m so happy tonight!”

The Frenchman took the win in a six-rider showdown, finishing just ahead of Wilm Vermeir (BEL) with Gentiane de la Pomme and Pieter Devos (BEL) with Jade vd Bisschop who rounded out third today.

The penultimate evening of action saw the stars of show jumping come out to contest the 61,000 euro prize purse. As the floodlights came on, 32 starters took centre stage in the colourful grass arena in the 1.50/1.55m challenge.

Frank Rothenberger’s course was another flowing test, the horses responding beautifully as the light began to fade, jumping as if with springs in their heels from the soft carpet of green grass. The course featured plenty for the riders to think about, with a time allowed of 79s playing a factor in this evening’s decider. Niels Bruynseels (BEL) joined the commentators in the studio this evening as a guest analyst, and predicted that there would be plenty of faults at the triple combination - the middle element featuring an unusual shaped filler.

First to enter the ring was Ben Maher (GBR) with his nine year old stallion F One USA, the impressive bay horse responding admirably to Maher’s requests as they flew around the arena. With this a serious horse for the future, Ben kept the pace steady, finishing clear but collecting one agonising time fault meaning they would not be able to progress further.

Denis Lynch (IRL) brought out new mount GC Chopin’s Bushi, this their first CSI5* show together. Lynch made a few changes, opting to ride the horse in a hackamore today and it paid off, the duo delivering the first clear of the evening and within the time allowed.

Luis Sabino Concalves (POR) was hoping to produce a clear on home turf, but a miscommunication between him and his horse Dominka van de Lucashoeve saw a refusal in the middle part of the treble combination, with the pair electing to retire today. Martin Fuchs (SUI) and Chica B Z looked strong in the first half of the course, but slowed a little during the second part, agonisingly falling short of the time allowed too, but just milliseconds faster than Maher.

Marcus Ehning (GER) produced a masterclass of a first round, riding the home-bred 14 year old chestnut stallion Funky Fred, the pair delivering a flawless clear to create a jump-off. Pieter Devos (BEL) and the ten year old Jade vd Bisschop also pulled off a foot-perfect clear, adding their names to the jump-off line up.

Gregory Wathelet (BEL) moved the slower-striding Spike vd Withoeve beautifully through the course, keeping momentum and a easy rhythm throughout to finish clear. He was quickly joined by compatriot Wilm Vermeir (BEL) and Gentiane de la Pomme, making it three Belgian riders in the jump-off. They would be joined by Olivier Robert (FRA) with Gentiane de la Pomme who looked confident and strong throughout their first round.

Eric van der Vleuten (NED) and Djoost Again finished clear but just outside the time allowed, the top Dutch rider visibly disappointed as he exited the arena and urging the final rider to go Abdel Saïd (EGY) to cover the ground quickly, in a camaraderie only seen in show jumping. But Abdel and Etos Hbc couldn’t finish inside the 79s, finishing clear but a second over to pick up one time fault.

Jump-Off
Denis Lynch (IRL) and GC Chopin’s Bushi were first to enter the six-rider jump-off, the new combination taking centre stage under the night skies. Lynch set off at a gallop, but took eight strides to the liverpool and had it down, and a miscommunication at the oxer put eight faults on the board.

Marcus Ehning (GER) and Funky Fred entered to a round of applause from the knowledgable crowd, the German maestro already impressing with a flawless first round. But the oxer at the far corner fell, as did the Longines plank, Ehning too finishing on eight faults.

Another round of applause welcomed Pieter Devos (BEL) and Jade vd Bisschop. They set off at a flat out gallop, Devos daring his mare to the fences. She responded brilliantly, fast in the first part of the course but careful in the second, finishing clear in 37.50s.

Second of the Belgian riders Gregory Wathelet (BEL) and Spike vd Withoeve came undone at the first part of the double, four faults ruling them out of a chance for the win tonight.

Wilm Vermeir (BEL) and Gentiane de la Pomme were fast in the turn to the third fence. A brave turn to the Longines plank made the difference, and they flew to the finish to shave tenths of a second off Devos’ time, crossing the line in 37.01s.

The final rider Olivier Robert (FRA) and Vangog du Mas Garnier had all the pressure on their shoulders but they kept their cool and flew around the arena. With a powerful rhythm throughout, they took an extra stride to the Longines plank but powered to the final fence - a huge oxer - and crossed the line in 36.69s to take the win.

Tomorrow will see the GCL Cascais conclusion, before the LGCT Grand Prix of Cascais, Estoril kicks off under the evening lights. Tune in live and exclusively on GC TV to watch all the action and see who will book their golden ticket to the GC Prague Playoffs.