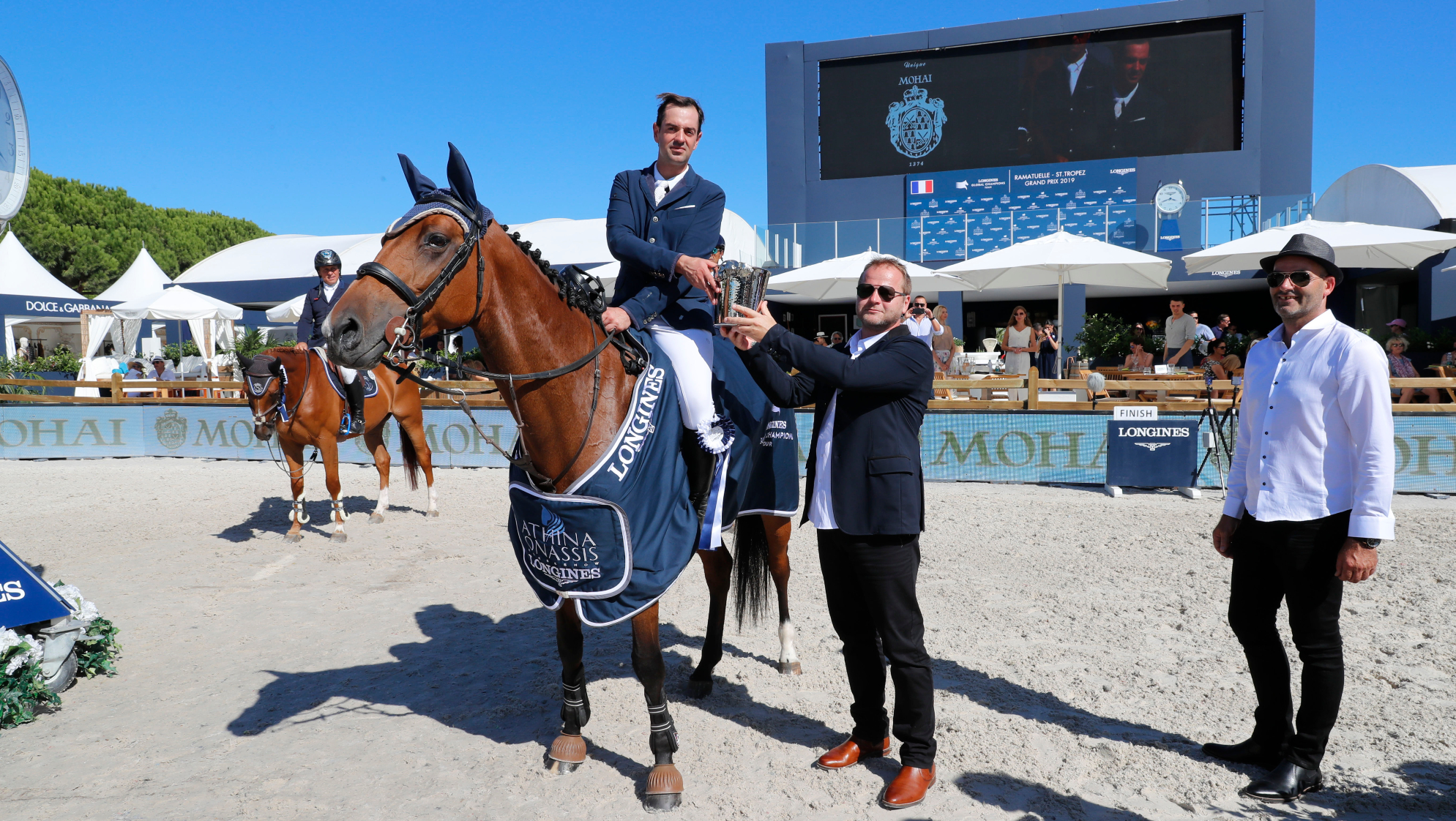 The Longines Global Champions Tour of Ramatuelle, Saint Tropez curtain-raiser kicked off in style as local hero Mathieu Billot (FRA) took the top honours on Gatrona in the Mohai Prix. Second place was taken by Luis Sabino Goncalves (POR) with Unesco du Rouet while the final spot of the podium was picked up by Carlos Enrique Lopez Lizarazo (COL) and Ulhane de Conde.

With spectators and VIPs settled into the luxurious surroundings, everyone was excited as the first CSI5* class of the weekend. 57 of the world's best combinations came forward to jump this 1.45m two-phase competition built by Uliano Vezzani. The course was twisty and there were lots of inside lines for the riders to choose in the second phase if they wanted to cut their time down. It was the final wide oxer that fell the most times throughout the dramatic competition.

Pathfinder Alexandra Thornton (GRB) set the pace early on producing a foot-perfect clear round Charielle in a speedy time of 28.78 seconds and finished just outside of the top 10. Home rider Simon Delestre (FRA) had a very unlucky pole down in the second phase finishing as one of the fastest four-faulters on the popular Hermes Ryan. The second clear round of the day was from Bertram Allen (IRL) and his big bay gelding GK Casper, they couldn't quite match the pace meaning they weren't in the money today.

Maikel Van Der Vleuten (NED) and his LGCT Grand Prix of Valkenswaard winner Dana Blue were on flying form until the last fence fell knocking them down the leaderboard. The time allowed in the second phase caught Abdel Said (EGY) out on Arpage du Ru. They picked up one time fault as the crossed the line in 39.29 seconds. The German superstar, Christian Ahlmann (GER) gave it everything he had on his experienced 14-year-old Ailina, they stopped the clock just 0.04s slower than Thornton's time.

Fast rider Carlos Enrique Lopez Lizarazo (COL) took strides out everywhere on his super speedy mare Ulhane de Conde. They flew into the lead setting a new time to beat of 27.40 seconds and leaving the rest of the field having to chase hard if they wanted to be in with a chance of winning. Nayel Nassar (EGY) was off racing before the first fence on his naturally fast Hermelien v. Hooghoeve, he easily left all the fences up and came home in a time of 27.72 seconds to place sixth overall.

The first pair to cut inside to the last fence was Luis Sabino Goncalves (POR). The risk paid off and they stormed into the lead with an incredible time of 26.99 seconds on his chestnut gelding Unesco du Rouet. Unexpectedly neither Kent Farrington (USA) or Ben Maher (GBR) made it into the second phase after picking up early faults on Austria 2 and Carlson 86 respectively.

The course really suited Mathilda Karlsson (SRI) and her 11 year old CSF Vendi Cruz, they flowed round as one in 31.47 seconds to just drop outside of the placings. The well known combination of Scott Brash (GBR) and Hello Mr President got caught out by the tall upright in the middle of the triple but will be back this afternoon to try and produce the all-important clear for New York Empire GCL tea,. Luciana Diniz (POR) and her bay stallion Lennox picked up the second-fastest time of the class but they rolled the last fence causing it to fall and putting her straight out of contention for the win.

But it was the flying Frenchman Mathieu Billot (FRA) who put the pedal to the metal right until the end on his 8 year old Gatrona meaning they landed at the top of the leaderboard in an unbeatable time of 26.53 seconds.

The first round of GCL Ramatuelle, St Tropez kick's off at 16.45 local time. Make sure to tune into our website GC TV to watch all the action live and for free.