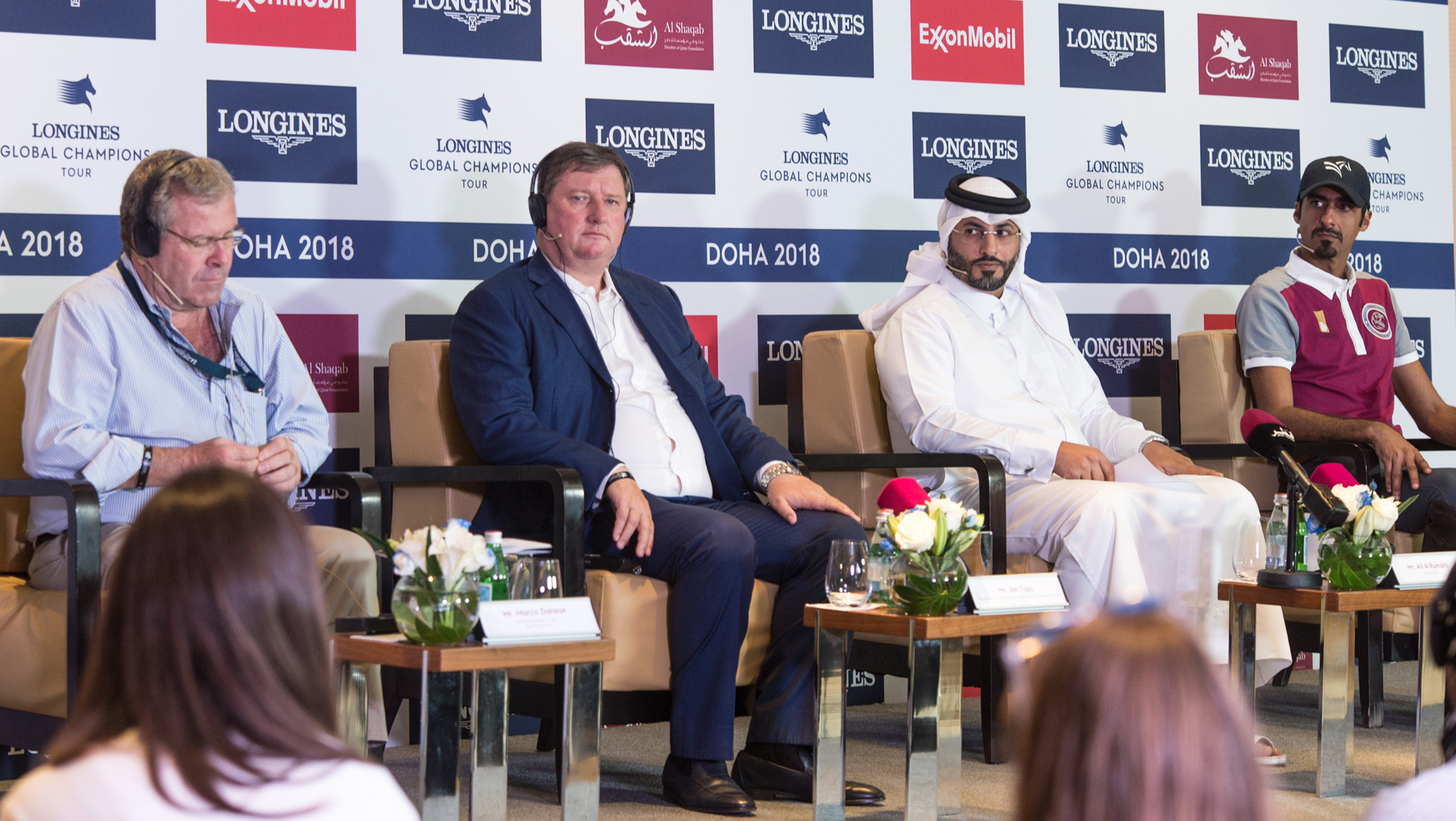 The world’s top riders and horses have begun arriving in Qatar for the finals of the Longines Global Champions Tour and GCL as competitive tensions mount ahead of kick off on Thursday.

With high stakes battles ahead over the three days of the event in the vast state-of-the-art AL SHAQAB arena in Doha, it is predicted that the sporting drama will go down to the wire.

LGCT President and GCL Co-Founder Jan Tops said at the opening press conference at AL SHAQAB - a member of the Qatar Foundation - today: “It's very important for us to be in this place [Qatar], in this part of the world. I think we have a great relationship built through the years and all the riders come to Qatar to compete in this magnificent arena.”

Praising the AL SHAQAB facility he added: “Its really a world village where everything is thought about. From the stabling to the arena, everything is horse minded. We all love to come here and are looking forward to the final of this great sport, the best horses and the best riders who will compete this weekend.”

Ali Al Rumaihi, Event Director of AL SHAQAB spoke of the importance of holding the LGCT and GCL final in Qatar: “We are proud to host the final which has seen 15 exciting competitions around the world. Events such as the Longines Global Champions Tour go a long way towards fulfilling Al Shaqab’s vision of being a leading global center for equine excellence and providing an engaging experience for the community. It helps to promote horsemanship, inculcate passion as well as promoting Qatar’s equestrian heritage.”

He also pointed out the tremendous work AL SHAQAB is doing within the community and to increase equestrian awareness, Qatari traditions and history, while also inspiring the next generation of young talent. “Visitors can enjoy restaurants and cafes, pony rides and Kid’s areas, and we encourage fans who have never seen the tournament to come and enjoy this special event with many different activities.”

Sheikh Ali Bin Khalid Al Thani agreed spoke of the importance for Qatar attracting the best athletes by hosting a leg of the LGCT circuit. He said: “We are very proud to bring this sport at this high level to Qatar. As you know this sport has grown a lot for this last few years. This is one of our missions to bring the best tour to Qatar and we are very proud to have it here and very proud to ride in it. Of course we are always excited to be home and have this amazing in Al Shaqab. I’m very excited to be here and we have prepared well to come to this show.”

Sheikh Ali spoke of his pride as GCL team Doha Fursan Qatar is qualified for the GCL Super Cup at the Playoffs and said: “We did our best and we could also do better but in another way we are happy that we are at least qualified for the final in Prague which was the ambition for us this year and we are looking to have a podium in Doha this year.”

Last year Her Highness Sheikha Mozah bint Nasser Al Missned, together with children from the AL SHAQAB Riding Academy, presented both the coveted LGCT Championship trophy to Harrie Smoldes and also the winning medal to Qatari rider Bassem Hassan Mohammed. His Excellency Sheikh Joaan Bin Hamad Al Thani was also in attendance along with diplomats from around the world.

LGCT and GCL Sport Director Marco Danese predicted another nail-biting climax to the season ahead of the new GC Playoffs in Prague in December. The winner of the LGCT Grand Prix of Doha will take the last qualifying spot for the LGCT Super Grand Prix at the Playoffs. And the top 16 teams in the final overall ranking after Doha will go through to the GCL Super Cup at the Playoffs.

Danese said: “As always we have a lot of riders fighting for the podium in the final and we have actually have seven riders, (Alberto) Zorzi, (Harrie) Smolders, (Daniel) Deusser, (Scott) Brash, Nicola Philippaerts, Edwina Tops-Alexander and Christian Ahlmann competing for the second and third place on the podium so I think its very interesting and I think that the decision is always at the last jump of the jump off.

“It was an exciting season with a lot of winners, of course the regular season is dominated by London and Valkenswaard, they are fighting for the first and the second place. But we have five teams competing for the third place so the battle is open of course for many teams and this is really interesting. Again we will see the final result after the last jump on Saturday.”

Tomorrow riders and horses will get their first chance to warm up under the imposing architecture of AL SHAQAB and GCL teams will make their final tactical decisions on which riders and horses to field for the big showdown of the team series.