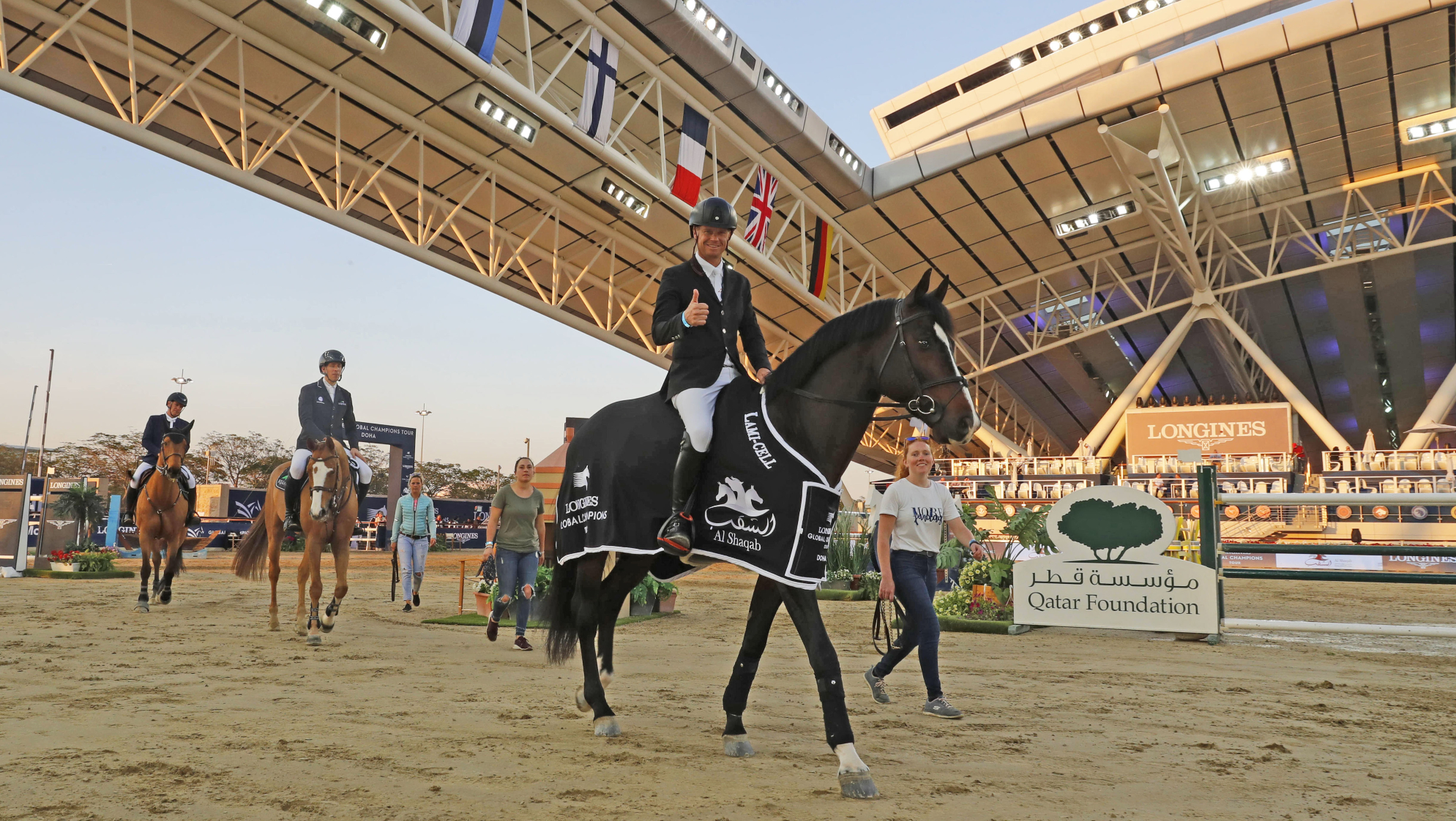 This afternoon saw the third CSI5* class take place in the stunning Longines Arena at Al Shaqab in Doha. The 1.50m speed class had 34 starters, and riders really had to keep their foot to the floor and ensure pinpoint accuracy to make their mark in this competitive class, testing their speed ahead of Saturday’s LGCT Grand Prix of Doha and GCL Doha final.

There were only 7 clear rounds over Frank Rothenberger’s 1.50m course featuring a testing double of tall uprights. Johan Sebastian Gulliksen (NOR) was first into the ring with the experienced Gin Chin van het Lindenhof, and the combination were looking to build on their win in yesterday’s two-phase class and set the tone today. However, it wasn’t to be for the pair today finishing with a total of 5 faults.

Next to tackle the testing course was Maikel Van Der Vleuten (NED) with Edinburgh, a horse new to the LGCT circuit. They achieved a great clear round in a time of 78.18s, which proved to be a time that could be caught. Shortly after, as Jerome Guery (BEL) entered the arena, all eyes were on him and his mount Eras Ste Hermelle. Jerome cut all the corners to pull off an incredible fast clear round in 71.59s to take the win overall.

Two riders after Jerome, Pius Schwizer (SWI) took to this twisty speed class, and gave it his all with Quatro Robin, but couldn’t quite catch Jerome’s time, taking fourth spot in 73.23s. Henrik von Eckermann (SWE) entered the ring on Best Boy with it all to do if he was to beat Jerome’s time. He was the first rider to attempt a difficult inside turn, and while it paid off, he finished agonisingly close to Jerome in second, only 0.04s behind.

Denis Lynch (IRL) looked to be on flying form with his bold bay Cristello but mid way round he got a little too deep into a wide oxer dropping him right down the order. Jane Richard Philips (SWI) and Kenia van ' T Laerhof produced the fastest round of the day on the clock but an unlucky pole at fence 10 put them out of contention for the win today.

The Flying Frenchman Roger Yves Bost (FRA) had a sensational run and was covering the ground rapidly on Castleforbes Talitha. They took third place overall in a time of 71.79 seconds.

The next class will kick off at 19.20 local time, tune into our livestream on GCTV to watch it all live and for free.