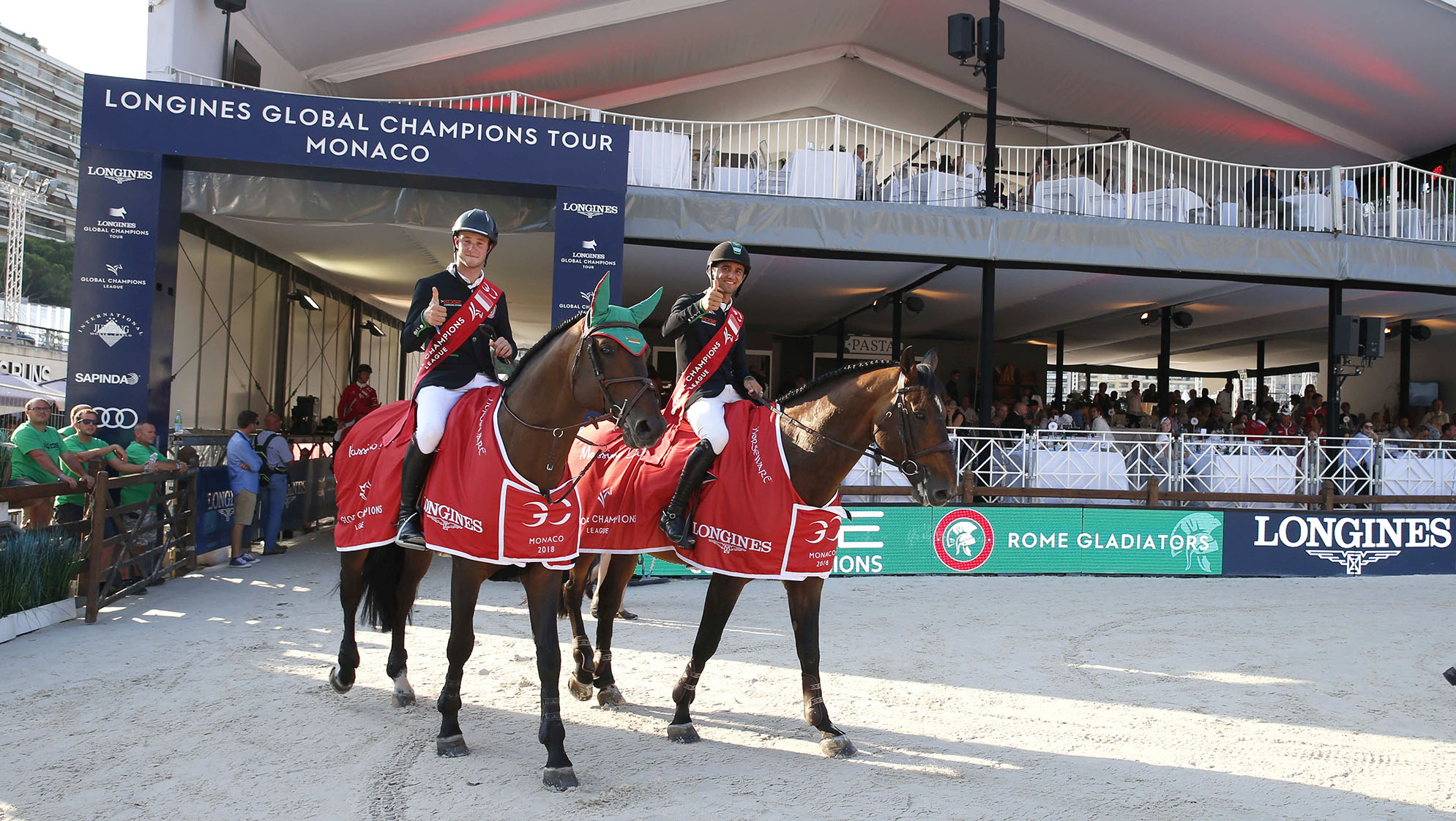 Constant Van Paesschen and Marlon Zanotelli of the Rome Gladiators made a meteoric rise up the overall GCL rankings today in Monaco, after the duo secured their first victory of the season in one of the most compact and challenging arenas on the circuit.

With their spectacular win today, the Gladiators now sit third in the overall Championship race, with a points tally of 137. Another strong result from London Knights’ team of Ben Maher and Martin Fuchs kept the team in the overall lead with 199 points, with Valkenswaard United’s Alberto Zorzi and Bertram Allen just holding on to second with 183 points in total.

Frank Rothenberger produced a tight and technical course, with athletes racing up and down the arena and a tight time allowed of 69 seconds. The design was challenging from the start, with a vertical out of the first corner requiring instant focus and commitment. Other challenges were posed by a gappy Sapinda vertical, an imposing black and white Massimo Dutti oxer, with a Longines treble set along the diagonal of the arena off a turn, requiring plenty of smoothness and balance and a double put close to the longside where spectators watched on.

Featuring a plank in, a big oxer in the middle, and a plank out, the Longines treble fell time and time again, particularly the first plank if the rider didn’t quite master the turn. The course suited sharp and intelligent horses, those who were most responsive to their riders and able to change direction and pace in a heartbeat.

There was huge disappointment for the Shanghai Swans after Pedro Veniss and For Felicia ducked out at the first fence, before taking out the treble and collecting 19 faults for the team before teammate Pius Schwizer took over the reins. But the Swans sunk further still after Schwizer rolled a pole, adding yet more faults to their tally. Home city team Monaco Aces also had a shock exit after Simon Delestre and Filou Carlo Zimequest collected an unusual 12 faults, despite a brilliant clear from teammate Julien Epaillard and Quedge Deenne.

The first of the double clears came from Doha Fursan Qatar, after Sheikh Ali Bin Khalid Al Thani with Carolina 31 and Michael Whitaker with JB Hot Stuff pulled out faultless rounds. Speaking after his round Michael said: “I thought my horse jumped really good. It’s a tough course, and it felt big! It’s a tall vertical for fence one, the horse has to be awake and concentrating right from the off, otherwise they won’t jump it. We needed this double clear!”

Doha Fursan Qatar were followed by Edwina Tops-Alexander and Pieter Devos of the St. Tropez Pirates who put in a team clear, keeping the squad on a score of four.

Valkenswaard United needed a strong result today to try close the gap to ranking leaders London Knights. First to go Alberto Zorzi and Fair Light van T Heike pulled out a spectacular clear, before further drama unfolded as Bertram Allen and the 10 year old Izzy by Picobello lost a shoe in the warm up. This meant they couldn’t jump after their teammate, and slotted in after London Knights, with anticipation mounting for the 2016 Championship winning team.

Overall leaders London Knights pulled out a stunning team round after Martin Fuchs with Chica B Z and Ben Maher with Winning Good all jumped cleanly to finish on the four faults and extending their lead ahead of the rest of the pack.

Bertram Allen of Valkenswaard United returned to the ring, clearly unfazed by Izzy by Picobello’s earlier loss of shoe. The team needed a clear, but it wasn’t to be after one pole fell, meaning London Knights would increase their ranking lead over United.

First of those on a clean score Montreal Diamonds had disappointment after Harrie Smolders’ Cas dropped a leg in the double to put the team on a score of 4, slower than the Knights despite a strong clear from Mark McAuley and Miebello. Prague Lions fielded U25 rider Anna Kellnerova first, and there was heartbreak as the final fence - the Monte-Carlo Casino vertical - fell. Another two from Gerco Schroder and Glock’s London saw the team plummet down the order and out of podium contention.

Constant van Paesschen pulled out a phenomenal clear for the Rome Gladiators with the enthusiastic stallion Jilbert van ' T Ruytershof, managing his horse brilliantly to leave the team on a zero score. Anchor Marlon Zanotelli put in a breathtaking performance with Rock'n Roll Semilly, keeping the Gladiators as the only team on a completely clear score.

Four faults apiece from Scandinavian Vikings’ Leopold van Asten and Geir Gulliksen dropped them down the order, and all eyes turned to New York Empire, the only team between the Gladiators and the win.

First to go Scott Brash rode Hello Mr President beautifully, but their hopes of victory fell as a pole was touched, meaning Gladiators would reign supreme. Another two poles for David Will with Deluxe Ilton dropped the team off the podium, and out of contention for a big points haul.

So victory would go to the Rome Gladiators who shoot up to third in the overall rankings, just behind Valkenswaard United and London Knights.

Jan Tops, GCL Co-Founder: “It was nice to have a new team pairing up - I think it was the first time [Marlon and Constant] rode together. The arenas are very diverse, which is what the GCL is all about - here we needed obedient horses with quick reactions, which is different from somewhere like Hamburg. That’s what makes the Championship so special. Monaco is not our biggest event in numbers, but we have many passionate fans, and lots of media. It has been one of the events from the beginning and we all love to be here."

Harrie Smolders, Montreal Diamonds, 3rd place: “Mark and Miebello is a great combination, they are very consistent, already last year, and that is why also took them onto our team. I’m pleased with Cas - we did already many big classes - and he looked very consistent and a lot of clears."

Ben Maher, London Knights, 2nd place: "I thought it was a difficult course today. It was hot at that time of the day and I always expected it to change around a bit today. There was many clears the first day and today, myself and Martin knew we had to get some clear rounds. Martin changed to a new horse and it jumped very well - which promising for the rest of the season that we have a extra horse on the team. We played the strategy - Martin couldn’t ride too fast. I went second and put the pressure on with a faster time and I think that gave us a little bit of edge today."

"As Harrie says, there’s a big gap from the second to third right now but we’re very strong team - tightly knitted together, we talk a lot and have a good plan going forward so we just have to keep trying to continue to do our best and select the right horses for the right venues and hopefully we can continue as we have been."

Marlon Zanotelli, Rome Gladiators, 1st place: “It was a big day for the Rome Gladiators and I’m very happy with my first podium for the Gladiators this season. I was under big pressure but it was a good pressure because Constant went first and jumped clear both times, and I knew what I had to do. I knew that we would not have the fastest of times so I concentrated on a clear round. Today was a much tougher course with a lot of faults and we were lucky that we managed to both jump clear rounds."

Constant Van Paesschen, Rome Gladiators, 1st place: "Jilbert [van ' T Ruytershof] is enjoying jumping and because he is breeding a lot it makes him is very fresh at the moment but he did a great job today. It was a good feeling to be part of a winning team in Monaco. Over the coming weeks, I hope the boys will do a good job - my next event from the team is in Berlin and we’ll see what is going to happen!"