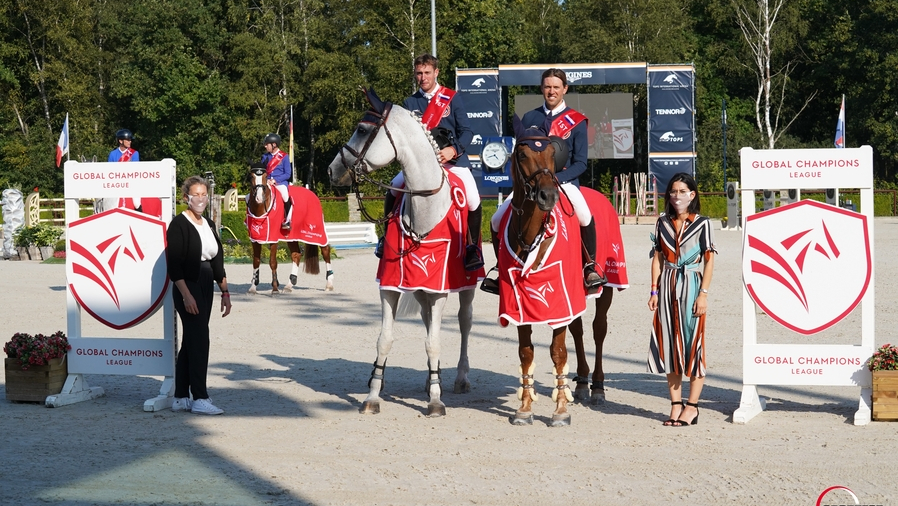 Hamburg Giants towered over their rivals to win the GCL of Valkenswaard Presented by Stal Tops in a rollercoaster team thriller.

Show jumping fans across the globe were treated to a high adrenaline team competition with dramatic changes of fortune throughout the unpredictable class.

It all went down to the wire as the Giants duo of Simon Delestre riding Hermes Ryan and Bart Bles riding Gin D blasted away the opposition with another stunning set of double clear rounds ahead of home team Valkenswaard United and New York Empire.

Speaking after their win, an ecstatic Bart said “We’re really happy, the horse jumped fantastic today, and we had a good clear in the first round”.

Tactics were at play as the Hamburg Giants aimed to be the only team with a completely clean sheet, and Simon explained “The first one I tried to go not too fast but enough so we can keep the lead so it was good for us to know that if we jumped clear, that we could win as nobody else jumped a double clear round. Today was our day. My horse Hermes Ryan really produced an amazing job again, and I'm really happy to share it with Bart. He's a good friend and I think together we are a strong team.”

Simon also spoke of the team’s appreciation for this exceptional competition in this difficult year, and said “For sure it’s an amazing 5 star, we are happy to have a little for this year, which is a really difficult and strange year for us, so we are really happy to be here!”

It was a welcome return to world class show jumping with the world’s top ranked show jumpers putting on masterful display across three days at Tops International Arena with all the action streamed live on GCTV. Here's how the action unfolded:

Taking 16 faults forward from the first round, Cascais Charms needed a solid performance to remain in contention but after 1 time fault from Roger-Yves Bost on Cassius Clay VDV Z and 14 from Francois Mathy Jr and Kinshasa de Goedereede, it was not to be the team's day finishing on a total of 31 faults.

Doha Falcons were next into the ring, with Bassem Mohammed clocking up 14 faults. He was followed in by young rider Mike Kawai and Celvin, who showed their talent with a great round, just rolling the final fence and picking up a time fault for the team to round out the competition on 27 faults.

Darragh Kenny went for the time in this second round following a horse change from Chic Chic to Belo Horizonte and pulled off a spectacular clear in 72.02 seconds. He was followed by Harrie Smolders and Cas, who showed all his experience to post another clear round, leaving the team on a fast 8 faults.

Time would really be influential for Berlin Eagles. With this in mind, Malin Baryard-Johnsson took some tight inside turns with H&M Indiana to seal her second clear round. Riding Asathir, Philipp Weishaupt also clinched a clear in this round to leave the team on a competitive 4 faults in 143.74 seconds.

The pressure was on as teams would need double clears to stay in contention, and Valkenswaard United rose to the challenge. Marcus Ehning and Funky Fred used all their experience, taking six strides to the final fence to secure the fastest performance of this round so far. Peder Fredricson also pulled off an extremely fast clear with Catch Me Not S, putting the home team to the top of the leaderboard at this stage on 4 faults to land them in eventual second place in a time of 136.06 seconds.

Christian Ahlmann had it all to do in this second round with Take A Chance On Me Z, but an unfortunate pole fell at the last fence. Young rider Evelina Tovek took to the stage next with Winnetou de la Hamente Z, taking an inside turn to the Roelofsen Horse Trucks fence, but the last two fences would fall and the team finished on 16 faults, dropping them behind Paris Panthers.

Setting out first for the team was Jessica Springsteen and Volage du Val Henry. Picking up the pace in the later part of the course, the pair aimed for a clear but sadly picked up one time fault. Hans-Dieter Dreher mirrored Jessica’s performance with Berlinda, also picking up a time fault and the team finished on 6 faults.

Max Kuhner and Vancouver Dreams also took a tight roll back to the Roelofsen Horse Trucks upright, and powered to the final tulip oxer to post a clean sheet. Next up, Alexandra Thornton and Cornetto K needed a clear round to keep ahead of Berlin Eagles. Rolling the first element of the GCL triple combination as well as the final tulip oxer, it wasn’t to be and the team ended on 13 faults.

Shane Breen did exactly what was needed with Z7 Ipswich, with a great fast clear. Scott Brash followed and showed all Hello Mr President’s scope and carefulness, with a stunning clear round. Their time was just one second slower than Valkenswaard United however, finishing on 4 faults in 137.28 seconds, resulting in an impressive third place.

Maurice Tebbel got deep to the second part of the final triple combination with Don Diarado and the pole fell, adding 4 faults to the team’s clean sheet from round 1. Abdel Said went for a clear round, without rushing Oak’s Grove Laith, but sadly the final fence fell. Abdel added a time fault for the team to finish on a score of 9.

Turning tightly after the Tennor vertical, Jur Vrieling rode a well controlled round on VDL Glasgow VH Merelsnest for a super clear round in 71.49. Wilm Vermier knew he needed a clear round and took a steady approach, but finished with 17 faults to drop them out of the running.

Another team coming forward with a clean sheet, Madrid in Motion faced enormous pressure to stay clear to reach the podium. A great clear from Eric van der Vleuten and Wunschkind set the pace, but Maikel van der Vleuten couldn’t replicate his earlier success with Beauville Z, picking up 12 faults and dropping the team down the ranking.

The power pairing of Daniel Deusser and Pieter Devos took centre stage, aiming for another clean sheet in this second round. Daniel Deusser rode a careful round on Casallvano, and produced the all-important clear. If Pieter Devos could jump clear, the Pirates would take the lead. Pieter took a tight turn after the Tennor vertical with Jade vd Bisschop but the lightest of touches sent three poles tumbling, and the team finished on 12 faults.

All eyes were on GCL of Doha 2020 winners and 2018 and 2019 GCL Champions London Knights as they took to the ring aiming for another top result. Martin Fuchs produced a solid clear jumping round with the efficient Stalando under enormous pressure to pick up 1 time fault. It left no room for error for Olivier Philippaerts and Hurricane, who took a careful approach around the course but picked up 6 faults to leave the team on a score of 7.

First in Jeanne Sadran was looking for another clear round with Digisport Satisfaction, and piloted the mare around the course to pick up just 4 faults. Julien Epaillard needed an exceptionally fast round on Alibi de la Roque but if anyone could lay down a fast enough time, surely it would be the flying Frenchman, who posted the fastest round in round 1. However, like Jeanne, he had one rail down and the team finished on 8 faults.

Hamburg Giants knew exactly what they needed to do in this extraordinary rollercoaster of a competition as the only team left for whom four clears was possible, having led from the first round. Bart Bles tackled the course first with Gin D, pulling out all the stops with a fast clear round. Simon Delestre needed a clear round to secure the top spot, and the experienced Hermes Ryan performed impeccably to seal another clear round and a win for the team!

The GCL team competition rounded out an incredible four weeks of show jumping at Tops International Arena, with young horses and young riders having the opportunity to compete on a world stage ahead of this weekend's feature CSI5* GC Valkenswaard. Riders, teams and show jumping fans worldwide will now be looking ahead to an exciting Longines Global Champions Tour and GCL season in 2021.