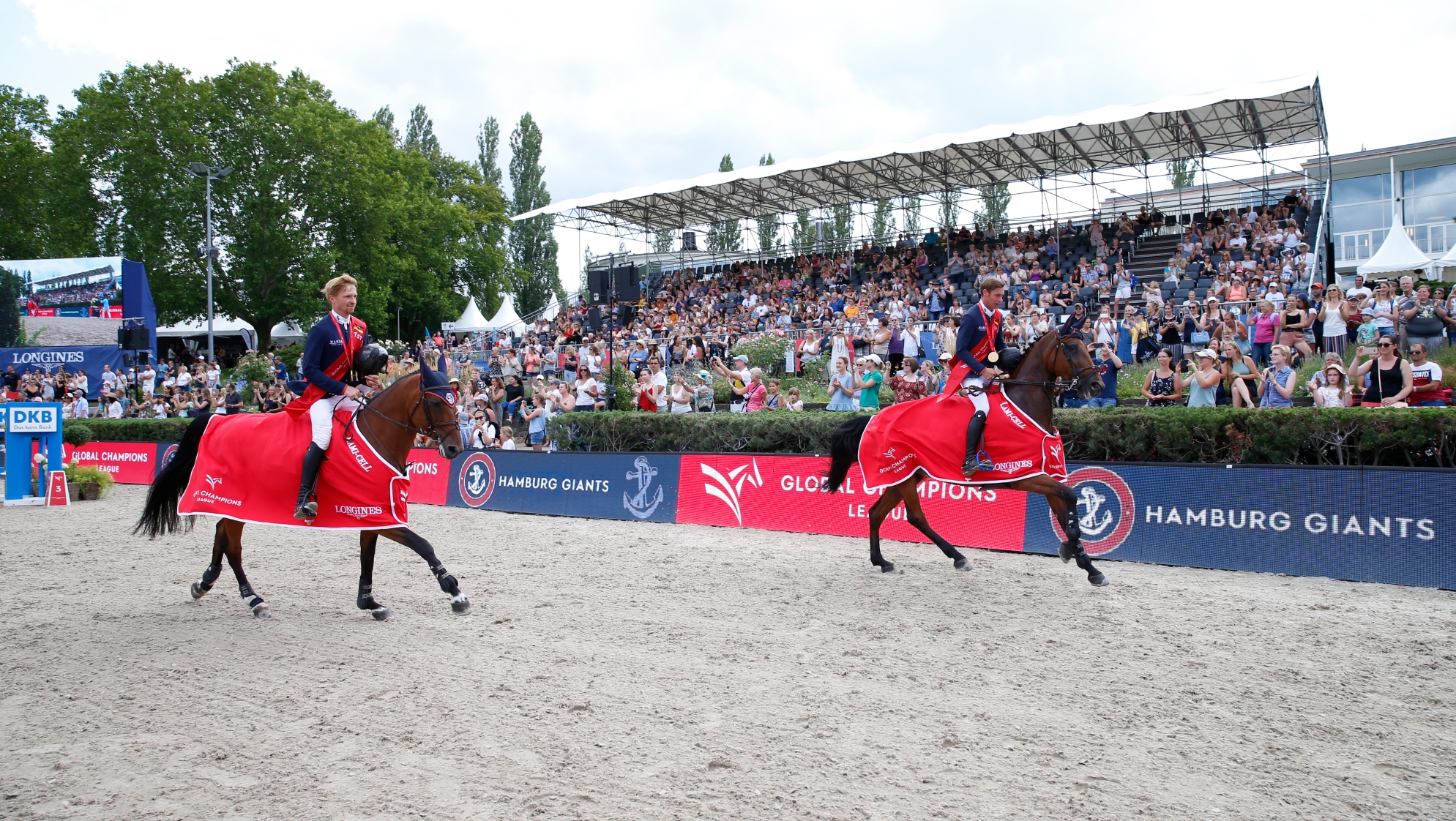 Hamburg Giants claimed their first-ever GCL victory in a knife edge competition where they faced down serious combat from some of the top squads in the 2019 team championship race.

Home city team Berlin Eagles put up a valiant fight, backed by fantastic support from the packed grandstands, but could not keep a grip on their overnight zero score and had to settle for second place on the podium.

Miami Celtics stay on top of the overall ranking on 235 points slightly extending their advantage over Shanghai Swans sitting four points behind on 231. London Knights, who were unable to convert their overnight lead into a win today, are breathing down their necks in third on 228 points. St Tropez Pirates are also on 228 points but in fourth, as the Knights have more wins under their belt. The Giants win moved the team up the ranking into 12th place.

Fans were packed around the compact sand arena in Berlin’s Sommergarten, filling not just the grandstands but the grassy banks to enjoy the sunshine and the gentle breeze. The world’s top horses were enjoying the air conditioned stables and warm up arena and the stage was set for a scintillating afternoon of top sport with incredibly tight margins in the 13th leg of the GCL series.

Frank Rothenberger’s 1.55m / 1.60m course would test the mettle of the best with some sharp riding needed over the sensitive triple combination and the Longines double near the end before the tall vertical to finish. Every result counts in the GCL with the first four teams at the finals in New York in September fast tracking to the semi finals of the GCL Super Cup at the GC Prague Playoffs two months later.  So the pressure was on in Berlin and team tactics were intensely discussed the night before.

Madrid In Motion
Last year’s GCL Super Cup winners were shrugging with a GCL Round 1 score of 12 points and Michael G Duffy (IRE), riding Lapuccino 2, wanted to make up lost ground. But he picked up four faults at one of the challenging oxers and one time fault as well.
Teammate Maikel van der Vleuten (NED) riding Beauville Z was determined to secure a clear and worked hard to the last fence fulfilling his goal and leaving the team on a total of 17 faults.

Chantilly Pegasus
The team started GCL R2 with 12 faults hanging over them from the first round and Roger-Yves Bost (FRA) and. Castleforbes Talitha were fast but clocked up another four faults.
Constant van Paesschen (BEL) and Verdi Treize cut inside to the GC Prague Playoffs vertical and just made it over the yellow and red oxer but his luck did not hold and the combination lost balance in the first two parts of the triple combination for 8 faults leaving the team on 24 in total.

Doha Falcons
Started on 8 faults from the first round and Bassem Mohammed (QAT) and Gunder looked off to a good start but kicked off the back rail of the final part of triple combination and picked up a time fault.
Youngster Mike Kawai (JPN) and Celvin looked set for a clear but at the end of the track he had the first part of the Longines double combination and then a refusal in the second element leaving him on 10 faults with item penalties and the team on 24 in total.

Valkenswaard United
One of the strongest teams since the launch of the GCL, Valkenswaard United are struggling to find top form and Alberto Zorzi (ITA) and Ulane de Coquerie were unsettled and had the first and second part of the triple combination down for 8.
The squad switched players for R2 with Frank Schuttert (NED) replacing Edward Levy and it paid off with the young Dutchman delivering an efficient clear on Queensland E leaving them on 16 in total but still way down the leaderboard.

Cannes Stars
Cannes Stars were another of the teams on 8 faults from the first round and the hugely experienced Margie Goldstein-Engle (USA) and Dicas put in a lively round and produced a superb clear.
But Karel Cox (BEL) had a round to forget taking four faults at the GCL oxer before more poles tumbled in the triple combination leaving him on a score of 12 faults and the team on a total of 20 and out of contention.

Leopold van Asten (NED) and VDL Groep Miss Untouchable looked smooth and impressive from the start and polished off a clear round to make up for his 8 faults in the first round.
But Christian Ahlmann (GER) and Take A Chance on Me Z had a few pole rubs around the track before the first part of Longines double combination fell for four faults - ending Christian’s faultless record at the LGCT Berlin events. The team finished on 12.

Shanghai Swans
Second place in the overall ranking Shanghai Swans clocked up 8 faults in the first round and fielded U25 Kim Emmen (NED) instead of Pius Schwizer.  Kim and Teavanta II C Z were lucky at the Brandenburg Gate wall after tapping a brick. and despite tapping pole at the vertical of the Longines double combination they went clear but with a time fault.
Daniel Deusser (GER) and Jasmien v Bisschop did not fare so well and had a frustrating pole down at the very first fence, the wooden oxer, for 4 faults with the team finishing on 13 and down the order.

Monaco Aces
Julien Epaillard (FRA) and Usual Suspect d’Auge came out of sync early on and struggled to stay on track to the GCL oxer hitting the poles for 4 and adding more faults at the double combination to finish on 8.
Marlon Monolo Zanotelli (BRA) and Koddac van het Indihof were off in quick time to keep ahead of their nearest rivals and got some great angles but suffered 4 faults at the blue Brandenburg Gate wall leaving them on a bruising total of 20.

Miami Celtics
The series leaders needed to keep their advantage and made a tactical team change substituting William Whitaker (GBR) for Shane Breen (IRE) to try and keep them on 4 from the first round. Harry Charles (GBR) led the charge on ABC Quantum Cruise but picked up four faults at the middle part of the triple combination.
Breen rode Ipswich van de Wolfsakker with the horse suited to the smaller arena and was on course for a well-well-deserved clear until a crushing blow at the final fence as the pole rolled leaving the team on a total of 12.

New York Empire
Team owner and rider Georgina Bloomberg piloted the 11-year-old bay Chameur 137 to an impressive clear round and were one of only a few combinations to deliver a double clear in the GCL Berlin.
The team substituted Daniel Bluman (ISR) for Scott Brash (GBR) riding Hello M’Lady. Brash and the 13-year-old appeared to go clear until Hello M’Lady hooked the pole on the final fence with one hind leg and picked up 4 faults as elation turned to frustation the team finshing on 8 in total and 5th place.

St Tropez Pirates
With the team in the top tier of the overall ranking they were taking no chances and decided on a tactical change. Dani G Waldman (ISR)  and Lizziemary went first and had a few lucky breaks but finished clear.
Pieter Devos (BEL) switched horses from Apart to Jade v Bisschop but the pressure was on and the pair picked up an unusual 4 faults at the first element of the triple combination. Devos hit the accelerator to make up critical time and it paid off leaving them on 8 in total but in 129.47 finishing in third place.

Prague Lions
Starting on 4 faults from the first round Prague Lions opted for some strategic changes. The team replaced Gerco Schroder (NED) with Niels Bruynseels (BEL) . Marco Kutscher (GER) kicked off their second round challenge with a change of horse to Chades of Blue but were too close to the final fence and hit the top pole for 4.
On form Niels Bruynseels and Delux van T & L looked strong from the off and powered around the track putting in a crucial clear to leave the team on a total of 8 faults in 6th place behind New York Empire on time.

Hamburg Giants
With only 4 faults from R1 the Giants were in with a strong chance to overturn their record and get on the podium.
Titouan Schumacher (FRA) and Atome Z took it steady to stay clear but still managed to put in an impressive time and fault free.
Bart Bles (NED) again was taking no chances and knew they needed great teamwork to keep it clear. He took it carefully but made up time saving some strides before delivering the magical clear to leave them as the only team so far on 4 faults in total and into the lead - the only team to finish with their overnight score intact.

Berlin Eagles
The home city team had the luxury of starting with a clean sheet and were fresh from their win at the previous leg. Applause rippled around the full grandstands and grass banks around the arena.
But Christian Kukuk (GER) and Limoncello NT had the back rail of yellow oxer down and cranked up the speed but had the first part of the Longines double combination down for a total of 8 ending their hopes of a back to back victory.
Ludger Beerbaum (GER) was under pressure to be clear and fast. Riding Casello again he did just that producing a masterful, perfectly pitched clear round for a total score of 8 but fast in 129.35 and into second place ahead of the Pirates.

London Knights
It was all to play for and London Knights just had to hold on to their precious zero score from R1.
There was a tactical switch from Martin Fuchs (SUI) to Olivier Philippaerts (BEL). Olivier brought in some serious horsepower in the name of H&M Legend of Love but picked up 4 at the DKB oxer almost on a slalom run into the fence and just avoiding a refusal.
With the Giants watching anxiously from the warm up arena, it was twin brother Nicola Philippaerts and Katanga v H Dingeshof left to chase a clear and in good time.  It was a robust effort but the middle of the triple combination fell for 4. The Knights finished on 8 in 129.60 in 4th place - missing out on the podium by only 0.13s.

The GCL action shifts to London next week and the stunning venue of Royal Hospital Chelsea for the 14th leg of the team series as the race to the finals and the Playoffs.