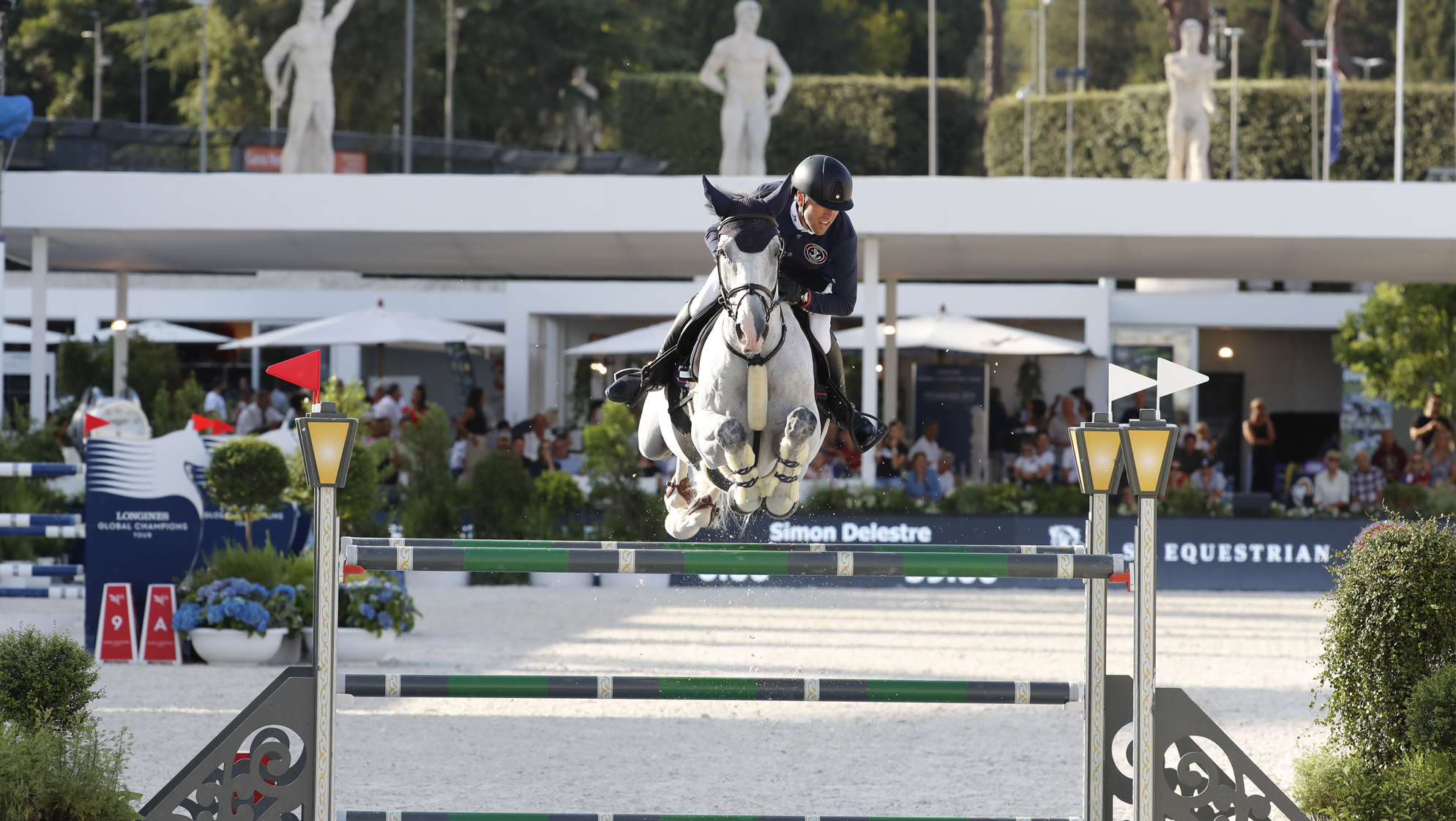 It would be a case of fortune favouring the brave, as last to go Hamburg Giants threw caution to the wind in a Ferrari-fast first round of action at GCL Rome to take pole position. Simon Delestre and Filou Carlo Zimequest backed up a foot-perfect clear from Bart Bles and Kriskras DV by putting in a turbo-charged display in front of passionate Italian fans.

The Giants took the lead at the final moment from St Tropez Pirates’ Edwina Tops-Alexander and Pieter Devos, as the Stadio dei Marmi played host to the 16th round of action in the Championship. Madrid in Motion’s Mark McAuley with Valentino Tuiliere and Eduardo Alvarez Aznar with Rokfeller de Pleville Bois Margot took the only other double clear of the day.

Speaking after their round Bart said: “Now we have a good start, my horse is young - but has amazing quality and scope. Time was important in this round and it went really nice. Simon’s horse is a quicker horse, so I knew [my job] was to go clear.”

In a formidable gauntlet thrown down to the rest of the teams, Simon revealed their strategy for Saturday’s showdown: “It was good to be double clear and fast enough today - Bart was fantastic. My horse has experience and is quite fast, so I can go more for the time. Tomorrow we will change both horses tomorrow - I’ll ride Hermes Ryan and he’ll take his top horse with a bit more experience so we’ll try for the double clear tomorrow."

Italian course designer Uliano Vezzani relished the challenge of setting a tough track on home turf, and made full use of the marble statue lined arena, which is next to the Olympic stadium. Vezzani’s course showcased fences depicting Roman symbols, including a Gladiator flanked vertical, and a beautiful Colosseum oxer. Horses and riders were tested by a delicate triple combination, a wide GCL oxer set by the in-gate, before a wide Longines oxer followed by an LGCT double set down the VIP hospitality which caused plenty of faults.

Fans flocked to the venue, with free entry for the public meaning many could enjoy top sport and thrilling action. Here’s how the first round of GCL Rome unfolded…

London Knights
The overall ranking leaders London Knights put forward their U25 rider Emily Moffitt to be the pathfinder for the competition, the young talent bringing her top horse Winning Good for the first round of action in Rome. The 10 year old bay gelding was a touch fresh and enthusiastic, giving Emily plenty to do to keep him in check. But he pulled her in a little to deep to the double down the VIP hospitality, the pole falling, and Emily having to slow him down throughout the remainder of the course - they would finish with 5 faults. Ben Maher brought out his top horse, Explosion W, and they looked to be on spectacular form - the chestnut horse powering around the track to finish clear.

Prague Lions
Gerco Schroder was first to go for the Lions this weekend, piloting his experienced 16 year old grey gelding Glock’s Cognac Champblanc. They went for a calm and steady approach, but ran a touch too close to the time allowed of 84s, crossing the finish line just a fraction too slow to pick up one costly time fault. Marco Kutscher brought out Boeckmanns Lord Pezi Junior, a handsome 10 year old bay stallion with a big, powerful stride. They cruised around the track, the horse eating up the ground to finish clear and keep the Lions on their score of 1 fault.

Monaco Aces
An early fence for Julien Epaillard and Virtuose Champeix would put the Aces on the back foot, and the stallion - a little unsettled - took down the following fence. It started to unravel for the pair, with the duo finishing on 12 faults before passing the baton to Laura Kraut and her horse Curious George. They however produced a foot perfect round, the bouncing horse flying around the course to keep the team on their score of 12 faults.

Doha Falcons
The middle and final element of the triple combination came down for Michael Whitaker and his young mare For Fun, and they finished on a disappointing 13 faults as the grey 9 year old appeared a little too enthusiastic to the fences. Bronislav Chudyba had everything to do with his bay year old gelding New York. They put in a flawless round to finish clear, keeping the team on their score of 13 overall.

Madrid in Motion
Mark McAuley took over the reins of his wife’s Valentino Tuiliere, and gave the 10 year old bay gelding a superb round to secure a clear for Madrid in Motion. He gave a delighted thumbs up after he patted the horse, passing the pressure to Eduardo Alvarez Aznar and his top horse Rokfeller de Pleville Bois Margot. Despite this, they produced the goods to finish clear - the team would take the provisional lead with the first of the double clears.

Shanghai Swans
Daniel Deusser brought out Killer Queen VDM, the 9 year old mare with her ears forward throughout the course and responding beautifully to Daniel’s requests. They pulled off a perfect clear, passing the pressure to U25 rider Kim Emmen and Delvaux. The big striding horse meant they had a slower pace, and they too came undone by the first element of the LGCT double to collect 4 faults. An additional time fault would see the Swans drop to a score of 5 at this point in the competition.

New York Empire
Denis Lynch brought out his new ride, Rubens LS la Silla, this being his second show with the 13 year old chestnut stallion. They managed their round to perfection, finishing just inside the time allowed and making the pair a combination to watch for the future. Hans-Dieter Dreher was next to go for the team, bringing out his 11 year old gelding Prinz. But the back rail of the LGCT oxer fell, the team tumbling to a score of 4 faults today, but in with a chance of a podium tomorrow.

Valkenswaard United
Marcus Ehning brought out formidable grey stallion Cornado NRW, the one-eyed horse flying over the fences with ease. But they were fractions too close to the LGCT double, the vertical coming down and adding 4 faults to the team. There was drama after Alberto Zorzi and the 10 year old Vauban du Trio stopped at the wide GCL oxer set by the in-gate. Further faults and time faults meant Valkenswaard United would finish on 19 faults today.

St Tropez Pirates
First to go for the St Tropez Pirates was Edwina Tops-Alexander with her 10 year old chestnut Casquell. They soared around the arena, banking the clear for the team before passing the baton to teammate Pieter Devos. He brought forward Jade vd Bisschop, the talented mare on keen form and responding beautifully to the Belgian rider’s calm requests. They brought home the goods, putting the team at the top of the standings so far.

Chantilly Pegasus
An early fault for Roger-Yves Bost and Castleforbes Talitha put the team on the back foot, and it would soon become a round to forget as they collected an unusual 17 faults. U25 rider Constant van Paesschen had everything to do, bringing out his top stallion Verdi Treize, and they finished clear and fast. But the Pegasus team would carry their 17 faults to tomorrow’s competition.

Scandinavian Vikings
Geir Gulliksen and Gin Chin van het Lindenhof had an unlucky knock of the first rail at the GC oxer, the Scandinavian Vikings dropping to a score of 4 faults. Christian Ahlmann brought out his 14 year old mare Ailina, but they too picked up a fault, with the Vikings on a score of 8 faults today.

Paris Panthers
First for the Panthers was Darragh Kenny, the Irish rider bringing out Important de Muze and the duo powered around the track to finish clear. Nayel Nassar and Lucifer V took up the mantle, but just ran down the line by the VIP a little strong, the first part of the LGCT double also catching them out. The Panthers would finish today on 4 faults, but finished fastest, keeping them at the sharp end of the grid ahead of Saturday's showdown.

Miami Celtics
Jessica Springsteen was first to go for Miami Celtics with RMF Zecilie, but the back rail of the latern-lined fence came down, and a time fault to add would drop the Celtics to a score of 5. There was disappointment for Harry Charles and ABC Quantum Cruise, three more fences adding to their score as the horse ran away with him a touch, putting them on a total of 17 overall.

Hamburg Giants
Bart Bles was the first to go for the Hamburg Giants, bringing forward his horse Kriskras DV, a bay 9 year old who looked on supreme form. They glided around the arena to finish clear, passing the baton to teammate Simon Delestre and his 10 year old grey gelding Filou Carlo Zimequest. Rocketing through the starting gates, the naturally speedy horse blistered around the course, making neat work of the tight turns and coming inside to the tricky line down the VIP. But it would be a case of fortune favouring the brave, as Simon and Filou flew to the finish in a phenomenally quick time, pushing the Giants ahead of the Pirates in today’s result.

The second round of GCL Rome will take place on Saturday 7th September at 13:15 local time - tune in via GC TV to watch the action LIVE and free.