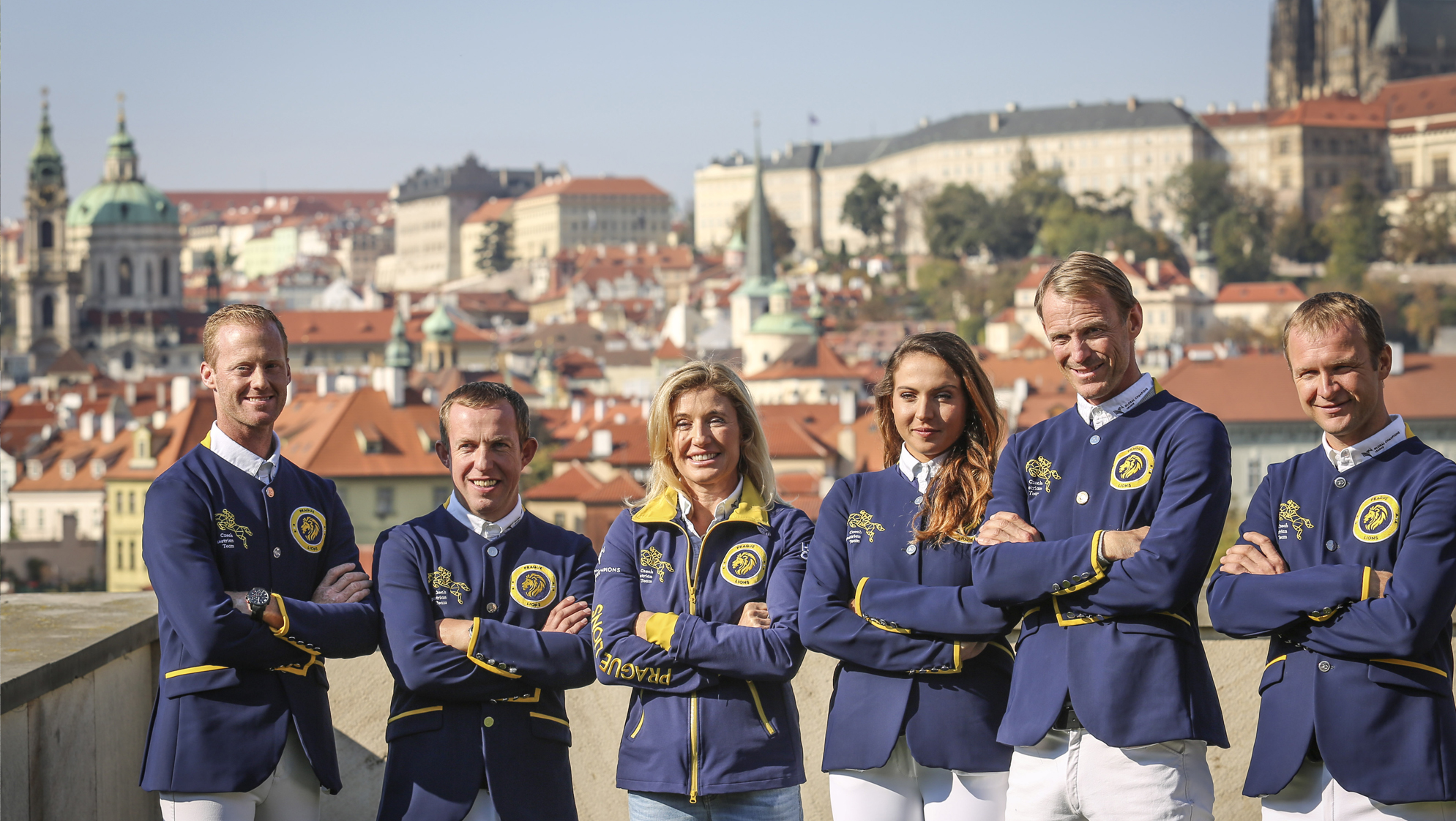 The GCL Prague Lions team today spoke of their “honour” to represent the city at the hotly-anticipated new GC Playoffs at the O2 Arena in the Czech capital before Christmas.

Set against the backdrop of the Prague Castle, and on the banks of the Vltava river, the Lions team met for an exclusive photoshoot on home turf as anticipation and excitement builds for the event. The team consists of two Czech riders - Aleš Opatrný and U25 rider Anna Kellnerová - Swede Peder Fredricson, Belgian Niels Bruynseels and Dutch star Gerco Schröder; all under the supervision of team manager Jessica Kürten.

Peder Fredricson took in the iconic sweeping landscape: “I’m excited to compete in Prague. It will be great," he said.

Twice this season, the Prague Lions have stood on the podium, with many more consistent results meaning they hold 10th in the overall rankings to date. In March this year, Anna and Gerco dominated the second round of GCL Miami Beach to take the team’s first win of 2018 while in September, Anna and Peder finished in third place in Italy’s capital city of Rome. Before the final round of the GCL Championship in Doha (November 8-10), the performances and position in the ranking mean the Prague Lions are guaranteed a place at the GC Playoffs - an important goal the team set at the start of the season.

“For us riders, who do the sport both in the Czech Republic and around the world, the GC Prague Playoffs is the biggest competition ever held. It is an honour for us that it takes place here in Prague,” said Anna Kellnerová. “It will be the most difficult and challenging competition in showjumping. The GCL is something extraordinary and the final round in Prague will be unique as well,” added Aleš Opatrný.

For both Czech riders it is a dream to qualify for the GC Prague Playoffs and perform in their homeland. “It is both motivation and excitement for us. We want to show everyone that we are able to perform in the world’s top competition in showjumping,” said Anna.

2018 has seen the world’s show jumping stars compete for a place at the prestigious Playoffs from 13-16 December, the first indoor event in the global circuit’s history. The winners of every LGCT Grand Prix this season - a total of 16 riders - will go through to the individual showdown, the LGCT Super Grand Prix on Saturday 15th December. And just 16 out of 19 GCL team will qualify for the GCL Super Cup played out over quarter final, semi final and final stages in a high octane climax to the season with €12 million in prize money.

The GC Playoffs will be a four day feast of show jumping aimed at passionate equestrian fans, however will provide something for all the family to enjoy as well as audiences new to the sport: “The audience’s support will be very important to us. We will be glad to see as many people as possible in the O2 arena. They will certainly witness a truly exceptional and beautiful competition. The GC Playoffs system adds a lot to the dramatic character of the competition,” said Lions team manager Jessica Kürten.

As well as top sport from the best horses and riders in the world, spectators can enjoy plenty of entertainment and spectacle throughout the event. The official opening including the team’s presentation will be held on Thursday, and the entertainment program will take place on Friday between the main competitions. Saturday morning entertainment will be dedicated to families with children, as well as on Saturday evening and on Sunday. The program will feature Jean-François Pignon with a display of his Camargue horses, the ‘Horsemen', Cirk La Putyka ensemble and an exhibition of a four-horse team from Kladruby nad Labem - six-time national champion Josef Hrouda and five-time national champion Jiří Nesvačil Jr. will also attend.

“We are preparing an exciting program for an audience of all ages. It will be an original show, the celebration of extraordinary performances of people and horses that will complement the sporting event. In addition to the performance of individual artists, the whole event will be accompanied by a large number of different audio-visual artistic performances, including a spectacular Thursday opening ceremony with the introduction of all teams,” says Jan Andrlík, the Chairman of the Organizing Committee.

Tickets are available at Ticketportal, with the price of daily tickets ranging from 1290 to 1990 Czech crowns (49 euros). “Sales are still growing as we expected – some stands are already sold out. The event has so far attracted the most attention from the equestrian community, which is familiar with the event and understands the significance of the GC Prague Playoffs for the equestrian sport. However, we’ve also seen a growing interest from the general public, and a recognition that it will be a truly exceptional sporting show and major social event,” added Andrlík.

For more information about the event, please click here.