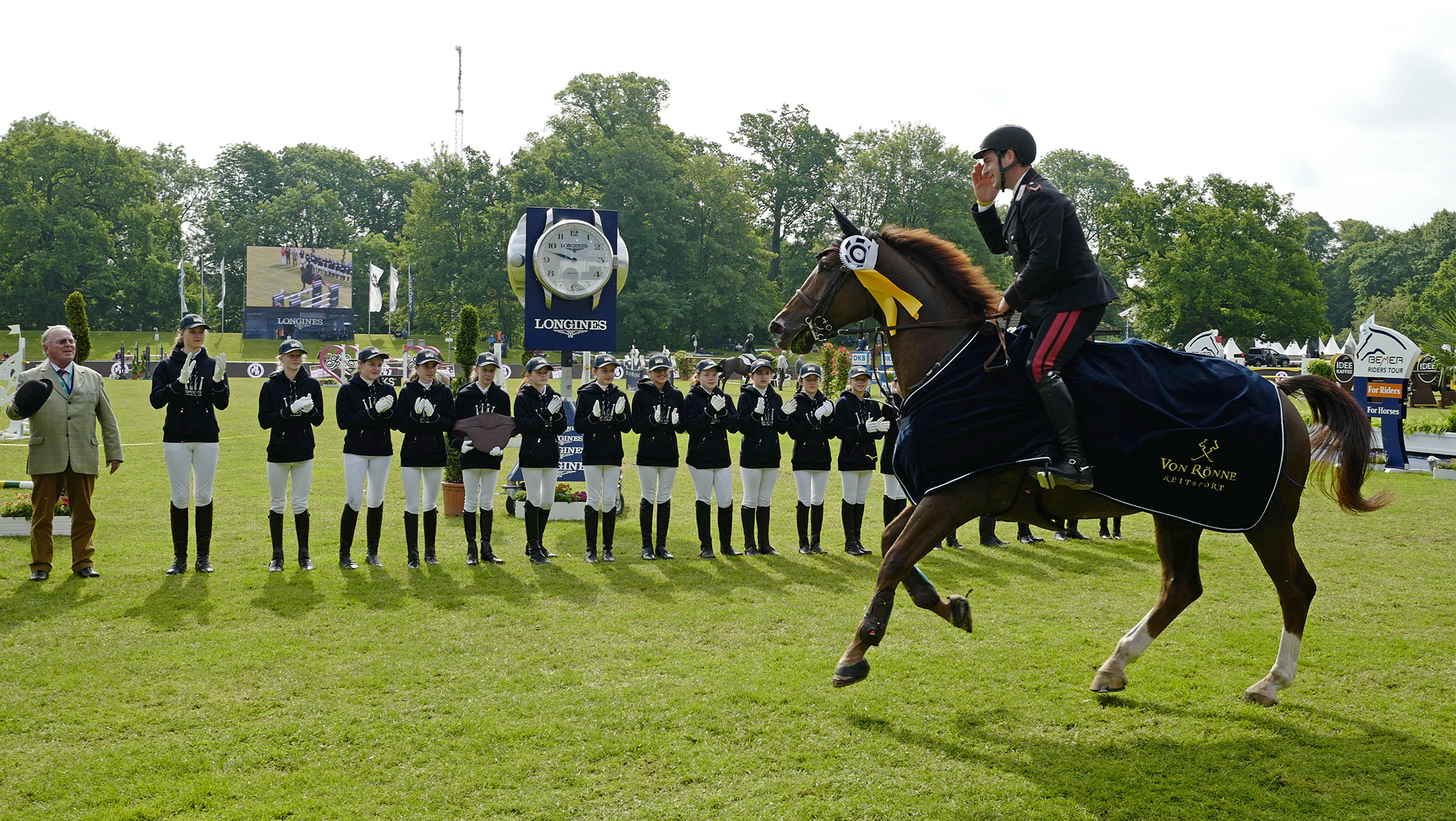 Emanuele Gaudiano (ITA) kicked off the third day of the Longines Global Champions Tour of Hamburg with a win on the chestnut gelding Kingston van het Eikenhof, storming ahead of flying Frenchman Roger Yves-Bost (FRA) with Sunshine du Phare by over 2 seconds.

With six showjumping stars from Germany entered into the 1.45m speed class spectators were hoping for a home win. The course designed by Frank Rothenberger set up the day perfectly, producing 17 clear rounds from a starting field of 27.

It was a quiet start to the speed class with Adbel Saïd (EGY) schooling his 10 -year-old mare Venise du Reverdy round the large grass arena instead of pushing for the time. This caused the combination to pick up 7 time faults leaving the rest of the field to test out the tight turns. Malin Baryard-Johnsson (SWE) flew through the starting gate looking like she was going to be the one to beat but a fault coming out of the combination followed by the back rail of the Longines oxer also falling, quickly left her with 8 faults in a time of 77.16 seconds. Wilm Vermeir (BEL) didn’t look like he was pushing King Kong d’Avifauna at all however he was the first clear round landing himself on top of the leader board for a short time.

It was former world number one Scott Brash (GBR) who set the time to beat early on. He opened Hello M’Lord up from before the first fence meaning he easily made the seven strides between the combination. He turned tightly back to the final line and the massive striding Hello M’Lord flew over the last in a very quick time of 67.64s.

Rene Lopez (COL) was the next contestant to challenge Brash. His ride Con Dios III was also a big striding gelding which allowed him to be within touching distance. He kept his round very neat and tidy going flat out to the last fence, but it didn’t pay off and the pair were 0.8 seconds slower.

Experienced Jur Verling (NED) cruised his young 8-year-old Fiumicino van de Kalevallei round the ring putting all his energy into clearing the fences and crossed the line in 78.86 seconds. Frenchman Olivier Robert (FRA) produced the tightest roll back in the whole class to the Olivia Nova upright. He was on track to challenge Scott but had to settle for 5th place as he couldn’t quite shave enough time off the clock.

Drama came when Bosty overtook Brash with a remarkably fast round. He even added an extra stride in the last line but still managed to cut 0.81seconds off Scott’s time flying him to the top of the leader board with only six other combinations left to challenge him.

But it was speed demon Emanuele Gaudiano (ITA) who took top place, the Italian consistently placing in speed classes and claiming another CSI5* win on the Longines Global Champions Tour circuit.

The next CSI5* class will kick off at 18.00 local time. Tune in via GC TV for all the action as it happens live from LGCT Hamburg.