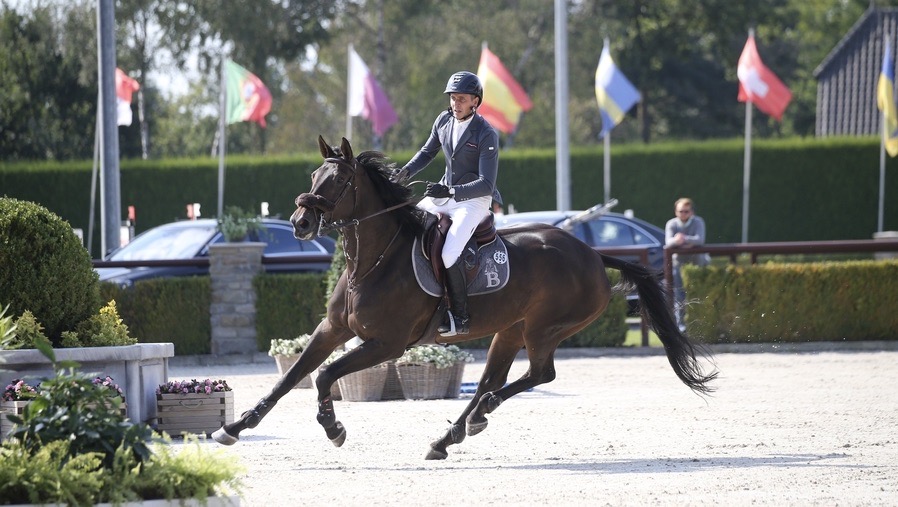 Speed merchant Julien Epaillard (FRA) clinched his first CSI5* victory of the weekend with his exceptionally fast mare Queeletta. The clears were hard to come by in the first half of the class but increased in number in the latter stages, with 11 going through to the jump-off in a highly competitive class. Many riders brought their top horses to this competition and the calibre of sport was second-to-none.

Some of show jumping’s brightest stars were early out of the starting blocks but the poles fell in the early rounds, demonstrating the high level of difficulty of this exciting class. Scott Brash (GBR) entered first and couldn’t continue his good form of yesterday, having two fences down with Hello Mr President. Martin Fuchs (SUI) followed him in and similarly found challenges around the course, dropping one pole for 4 faults.

The first clear round of the class would go to Abdel Said (EGY) with Arpege du Ru, Abdel seeing a perfect stride to the tricky planks and sailing around the course. Marc Houtzager (NED) had a surprise refusal with Sterrehof's Edinus at the triple combination in front of the VIP building, and the pair also picked up 5 time faults to finish on a costly 9 faults.

It was also not to be Philip Houston’s (GER) day, as he picked up 16 faults with Chaquilot. The clears remained elusive, and while Darragh Kenny (IRE) laid down a fast time with yesterday’s GC Grand Prix of Valkenswaard qualifier Belo Horizonte, dropping one unlucky pole to finish on 4 faults.

Peder Fredricson (SWE) claimed the second clear round of the class with the consistent H&M Christian K. Speed merchant Marlon Modolo Zanotelli (BRA) set out on a mission with Icarus but wasn’t able to keep the poles up, with the delicate vertical fence 9 falling to finish the pair on 4 faults.

Young rider Jack Whitaker (GBR) also fell foul of fence 9, and added this to a dropped pole in the triple combination to finish on a score of 8 with Scenletha.

Gregory Wathelet (BEL) used all his skill with his striking dark bay Iron Man van de Padenborre around the testing course but despite knocking two poles that stayed up, the planks fell and they finished on 4 faults.

Talented German rider Daniel Deusser (GER) piloted Calisto Blue to a foot perfect round, sealing the third clear of the class. Cindy van der Straten (BEL) rode a stunning clear round with Urban de Rohan but sadly picked up one time fault to drop out of the jump-off.

Willem Greve’s (NED) scopy 9-year-old stallion Grandorado TN showed all his skill and talent despite his young age, but couldn’t quite keep the poles up and finished on 9 faults and at the halfway point, only three riders were qualified for the jump-off.

First to go in the second half of the class was Olivier Philippaerts (BEL) with Hurricane. Olivier used all his skill to pilot the horse around this twisting course and his careful riding was rewarded with a clear round - the fourth of the class.

The next clear went to Eric Lamaze (CAN) with the impressive Dieu Merci Van T&L, jumping a stunning round to join the list of riders in the jump-off. It wasn’t to be today for next in Bart Bles (NED), who rolled just one pole with Gin D.

Julien Epaillard (FRA) set out at a fast pace on Queeletta, powering around the course and leaving all the fences up to post the sixth clear in this competitive class. The next through to the jump-off would be legendary rider Ludger Beerbaum (GER) with Quirina Louis, a young mare who showed all her class despite only being 8 years old.

Another clear was to follow with Shane Breen (IRE) and Compelling Z, Shane taking considered lines around the course to ensure the poles stayed in place. Jane Richard Philips (SUI) rode a positive and confident round on the 9-year-old Fouego de la Closiere and despite Jane’s careful approach, the final part of the triple combination fell once more to finish the pair on 4 faults.

Eleventh to post a clean sheet was Harrie Smolders (NED) and Cas, another careful approach paying off around the delicate fences. Young rider Suus Kuyten (NED) used all her skill to keep a clean score, but she picked up just one time fault with Alfa Jordan to finish with 1 fault.

First to go in the jump-off was Abdel Said who took some stunning tight turns but just had one fence down in 45.43 seconds.

Peder Fredricson pulled out all the stops and kept up the pace to post the first double clear in a time of 43.71 seconds.

Daniel Deusser also had his foot to the floor to finish in 43.6* but a tight turn back to the pink upright caused the pole to fall for 4 faults.

Using Hurricane’s big stride to cover the ground, Olivier Philippaerts secured the second double clear of the class, but he couldn’t match Abdel’s time and finished in 44.99 seconds.

Eric Lamaze fell foul of the red oxer, taking out the front rail to also finish on 4 faults. Speed demon Julien Epaillard used both tight turns and kept a flowing pace throughout to take the lead at this stage, taking 1.43 seconds off Peder’s time to finish on a clean sheet in 42.28 seconds - a time that no other combinations would be able to catch.

Taking strides out around the course, Shane Breen looked to be hot on the heels of the leaders but was still outside Julien’s time with a clear in 43.87 seconds.

Athina Onassis posted a stylish clear round to take fifth place in 50.41 seconds in this class. WIlm Vermier followed her with an 8-fault performance, and Harrie Smolders closed the jump off with the fastest round of the day, picking up 4 faults to finish in sixth.

Riders will now look ahead to this afternoon's GC Grand Prix of Valkenswaard Presented by TENNOR, beginning at 16:30 CET. Click here to watch it all live!