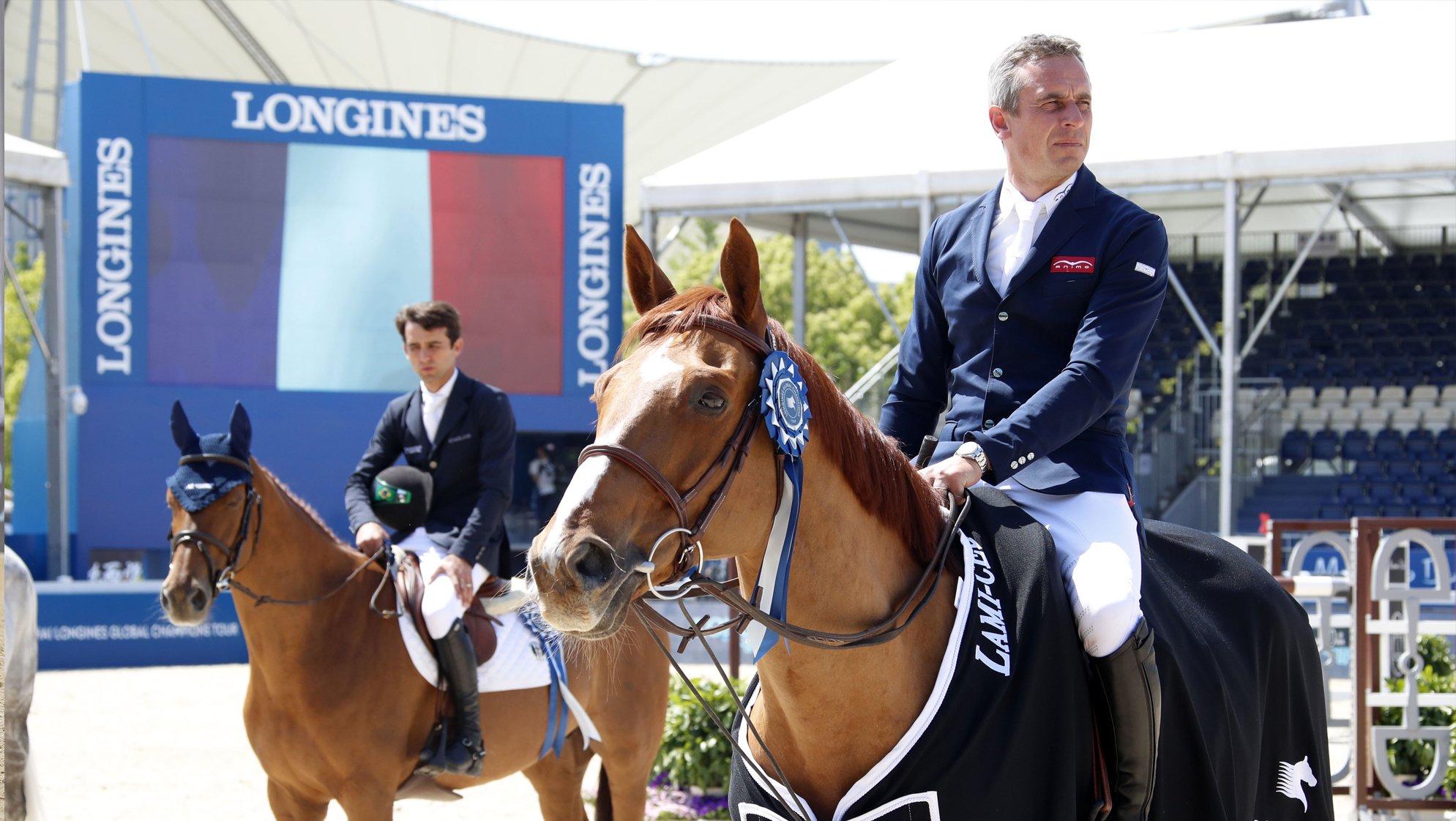 Julien Epaillard (FRA) and Usual Suspect d’Auge chalked up yet another CSI5* speed class win at the Shanghai Longines Global Champions Tour, with a dominant performance in today’s opening class.

Julien said “It’s nice to start like this - for the moment I’m having a good start of the season, so I hope we continue like this! Everyone is here with good horses, and it’s the best riders, but for sure we will fight for the win in the LGCT Grand Prix tomorrow.”

With clear blue skies and comfortable warm temperatures the first day of competition kicked off under the now iconic red China Art Palace. Fans had been queuing all morning to enter the showground early, with a spectacular village, plenty of entertainment and rider autograph sessions complimenting the top sport on offer in the main arena.

Uliano Vezzani’s two phase course was a flowing route around the square sand arena. A double combination down the main grandstand side drew gasps from the crowd as spectators witnessed the world’s top horses and riders flex their muscles for the first time this weekend. A delicate SPD Bank vertical set towards the in-gate required plenty of precision, with a Longines oxer the deciding fence as riders looked to finish the first phase clear and proceed directly to the second - which would be measured against the clock.

First to set a time in the second phase was Alberto Zorzi (ITA) with Cinsey, the 12 year old dark bay stallion setting a steady time of 30.86s. However many riders opted to take their foot off the gas, saving themselves for the bigger 1.50m jump off class later today.

Scott Brash (GBR) and Hello Shelby soon turned up the heat as the pair powered around the second phase much to the delight of the crowd, stopping the new time to beat at 26.40s. Daniel Deusser (GER) and Jasmien v. Bisschop looked a force to be reckoned with as they galloped down the final line - a delicate double along the VIP hospitality area. But they couldn’t beat Brash, finishing in 27.39s and slipping into second at this stage of competition.

Marlon Zanotelli (BRA) and Handy van HD took over Scott’s lead, but it was short lived after French speed merchant and LGCT Grand Prix of Doha winner Julien Epaillard (FRA) with Usual Suspect d’Auge knocked a full second off their time to light up the time boards in 24.73s. Shane Breen (IRL) and Colmar looked on flying form with the huge striding grey eating up the arena to slip in behind in 25.56s.

Local spectators were delighted after You Zhang (CHN) with Caesar finished clear, cheering their home rider after every clear fence and celebrating in style as they crossed the finish.

The next class kicks off at 15:00 local time (that’s 09:00 European time), with a 1.50m jump off class the feature competition of the day including a whopping prize purse of €200.000. Day 1 of GCL Shanghai will take place on Saturday 4th May, followed by the LGCT Grand Prix of Shanghai. And Sunday will see the conclusion of GCL Shanghai taking place at 13:15 local time.