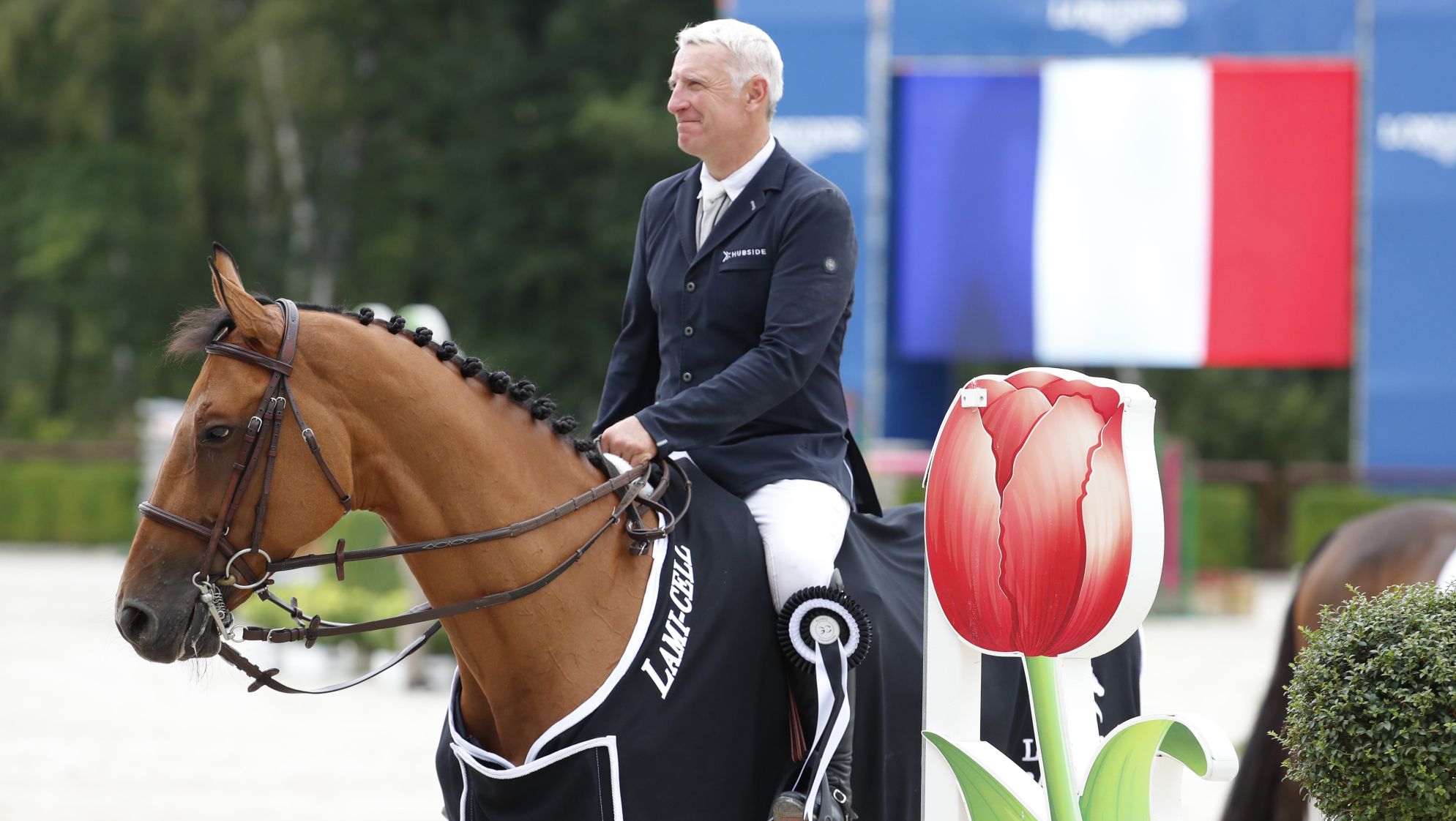 The Longines Global Champions Tour of Valkenswaard kicked off with a bang as Roger-Yves Bost (FRA) stormed to victory in the 1.45m Two-Phase competition. There was a stellar line up of a-list combinations as the worlds best horses and riders competing, but Bosty won it from the front, as the first to go in the class.

Uliano Vezzani built an exciting, flowing course with a tight time allowed of 57 seconds in the first phase. 55 combinations came forward to tackle this first class of the weekend but only 16 managed to leave all the fences up within the time as the water try fell the most.

Pathfinder Roger Yves-Bost (FRA) lived up to his name of the flying Frenchman and produced a fast clear in a time of 24.93 seconds taking an early lead with Castleforbes Talitha - his 12 year old bay mare. Julien Epaillard (FRA) who is normally the one to watch in a two phase competition, rolled a pole on the second part of the double in the first phase putting him straight of contention for the win with Alibi de la Roque.

There was drama when Christian Kukuk’s (GER) grey stallion Colestus unexpectedly slammed the breaks on at a wide oxer early on. This stop caused the combination to also pick up some time faults leaving them right down the leaderboard.

World Number Two Peder Fredricson (SWE) and his star horse H&M All In jumped a foot-perfect clear but wasn’t pushing for the time to save his energy for tomorrow’s Super Saturday. Jur Veiling (NED) and Comino then jumped the third to last fence on the tightest angle in the whole class but this risk caused the fence to fall so it wasn’t to be a win for him today.

Last year’s LGCT Grand Prix of Valkenswaard winner Frank Shuttert (NED) took the slow and steady approach, picking up two time faults in the second phase with Queensland E, aND William Whitaker (GBR) also got caught out by the triple combination knocking him out in the first phase on RMF Chacco Top.

Nayel Nassar (EGY) set off at a gallop on his bay Hooghoeve; the pair were close to the time to beat but finished in fourth place with a time of 27.08 seconds. But it was Kent Farrington (USA) who gave Bosty a run for his money crossing through the timers just half a second slower to take second place on Austria 2.

Spencer Smith (USA) gave it everything he had on his super speedy chestnut Diablo. Unfortunately, even though they finished with a well respected time of 25.72s they became a little flat towards the end of the course and picked up 8 faults. Local hero Eric van der Vleuten (NED) flew into third place on Djoost after a flawless round, clearly leaving plenty in the tank for tomorrow. Again while it was a disappointment for Daniel Dessuer (GER) and Jasmien v. Bisschop when the last fence fell pushing them outside of the top 20.

Many tried to catch Bosty's time but couldn’t quite match the pace of the fast and furious combination, so it would be a brilliant win for the Flying Frenchman, setting him up for the weekend perfectly.

The next CSI5* class GCL Valkenswaard Round One will commence at 17.30 local time so make sure you tune into our website GC TV to watch it all live and for free!