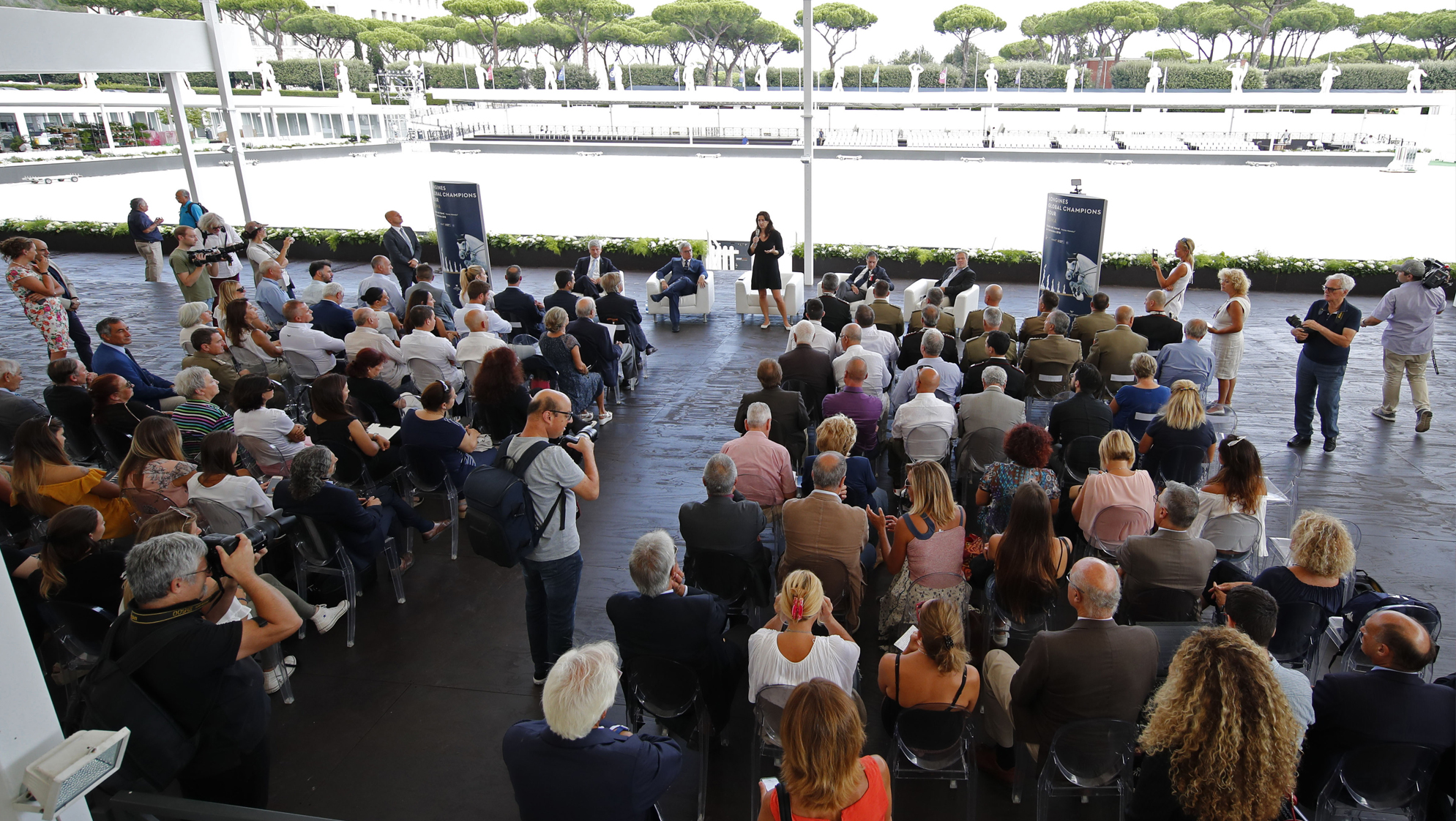 The 15th leg of the Longines Global Champions Tour Championship was officially kicked off today, with a pre-event press conference hosted at the spectacular Stadio dei Marmi in Italy’s capital city of Rome.

Speaking to the local media, Danese gave an overview of what’s been a thrilling 2018 LGCT and GCL season so far, highlighting the excitement and importance of the upcoming finals in Doha, and the GC Playoffs in Prague. “The new innovation this season is the GC Playoffs in Prague (13/16 December). The LGCT and GCL brings top sport to unique locations around the world, from Miami Beach, to Paris, London to here in Rome, and we continue to work to make our sport accessible and bring new audiences to show jumping.” Danese also spoke of the support the home city GCL team, the Rome Gladiators, will expect to receive, with popular Italian star Lorenzo de Luca one of the team’s star strikers: "In Rome, the Gladiators will be the team to support, and we can expect great passion from the crowd for them. Only 16 teams can qualify for the GCL Super Cup, so it will be very exciting. In the LGCT Grand Prix, the winner will have a chance to qualify for the LGCT Super Grand Prix at the GC Playoffs, so far Alberto Zorzi has a place in the Playoffs, and the constant growth of the Italian riders make us hope for another victory this weekend!”.

Senator Claudio Barbaro, who is a member of the committee in charge of public education and culture, spoke of the prestige of the forthcoming event: "The circuit is unique with his many faces - sport, environmental, culinary and social. It is perfectly in keeping with in the guidelines of the new government. We want to make sport become a point of togetherness, not only centred around competitive spirit, but also for all integrated activities."

Member of Parliament Federico Mollicone, a member of the committee in charge of culture, science and education: “Sport, art and culture often has a common hero: the horse. This is one of the values of the Longines Global Champions Tour of Rome, which give us the nobility of the equestrian art, while also showcasing the beauty of Rome and the Stadio dei Marmi all over the world on a global platform."

General Secretary FISE Simone Perillo agreed: "It is the fourth edition of an extraordinary event, a marvelous setting for equestrian sports: Rome is once again at the center of world equitation. It is not surprising that this circuit is called "Formula 1 of show jumping". I worked in that motorsport Championship, and indeed I confirm that the Longines Global Champions Tour has many parallels with Formula 1."

With the event free to the public, there will be something for all the family with a varied and exciting programme on offer. As well as top sport, a variety of artists, painters and sculptors will again be present this year to pay homage to the horse: Master Francesco Scagliarini, known for his equine heads crafted of typical Salentinian materials as Cursi or Alezio stone, wrought iron, clay and olive wood; painter Tita Signorelli, from Turin, and shiatsu specialist Daniela Mariano, long time friends sharing a passion for the expressive and creative side of animal language, both equine and pets. Spectators will also be treated to entertainment from dancers, acrobats and comedians - all  coming together for the special equestrian performance ‘I Cavalli di Roma. Il Carnevale Romano’.

Event Co-ordinator Eleonora di Giuseppe gave an overview of the week’s programme: “This will be four days of celebration of the horse, as a partner in sport and life. Horse riding often combines great sport with the social function of an animal that is an integral part of the community. Riding has the ability to transmit important ethical principles, and we are all here because of the horse.”

With the best of the best show jumpers in action this weekend, including 8 out of the top 10 in the LGCT Championship, fans will be treated to top sport. Italian Chef D’Equipe Duccio Bartalucci spoke of the importance of Italian riders competing on such a global stage ahead of WEG, where they compete against the top international stars of show jumping: “We have many Italian riders who have led a brilliant competitive season. This is the last competition before the FEI World Equestrian Games (19/23 of September). We will watch their performances closely, including Tokyo du Soleil in particular ahead of Tryon.”

Two local heroes also joined the press conference today, with Italian riders Emilio Bicocchi and Luca Marziani taking part in the CSI5* competition. Bicocchi spoke of the level of competition on the Championship: "The Longines Global Champions Tour Rome is fundamental for the world and Italian’s horse riding. At the Stadio dei Marmi we will see incredible competition with a high technical course in a unique location.”

Compatriot Marziani closed the press conference, speaking of the significance of riding in front of a home crowd. “Competing at home is a beautiful emotion. Last year I experienced the show as a spectator, and I am really happy to come back here as a rider.”

The event kicks off this Thursday 6th September, running until Sunday 9th September, with all the action streamed live via GC TV and selected classes on the official Facebook Pages.