Epaillard claims his eighth win on the LGCT this year! 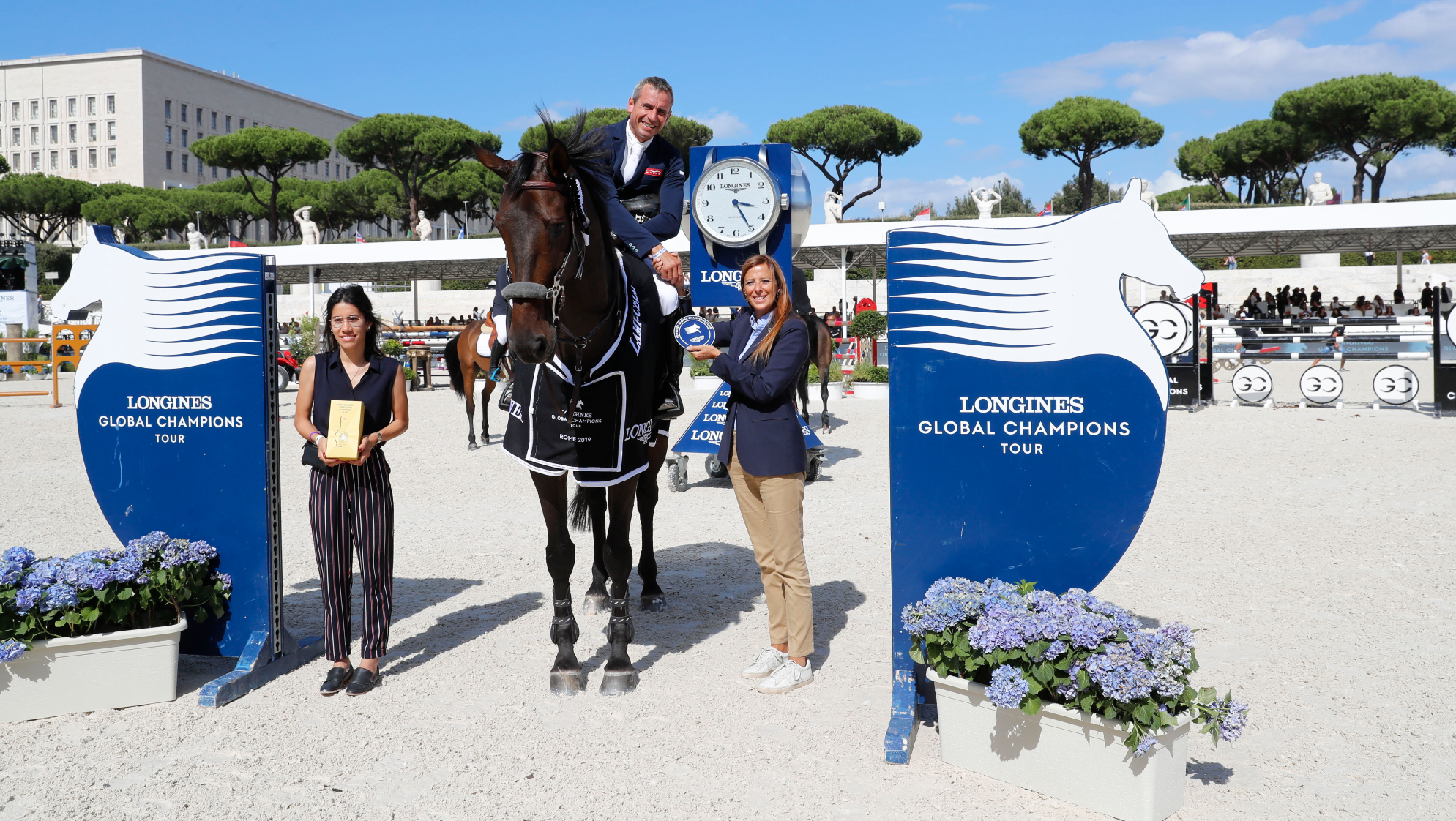 The first class of the weekend kicked off in style as Julien Epaillard (FRA) once again took top honours on Queeletta by just over 0.2 seconds ahead of Constant Van Paesschen (BEL) and his black 10 year old Vendetta Treize. Third place was clinched by Nayel Nassar (EGY) on his speedy mare Hermelien vd Hooghoeve at the Stadio dei Marmi on day one of the Longines Global Champions Tour of Rome.

A beaming Julien Epaillard (FRA) said: “It’s always nice to start with a good round, my mare jumped super today and I tried to be as fast as possible. She has a big stride and jumped super so it’s a great victory. It’s amazing to jump here, the atmosphere is fantastic, it's a historic place and always very nice to have sport here."

Fifty-one international combinations came forward to tackle the 1.45m two phases competition with just 18 producing clear rounds. Uliano Vezzani (ITA) built a full up technical course, the tall upright coming out of the triple combination proved to cause the most problems and surprisingly the wide Longines oxer jumped very smoothly.

Pathfinder Alexandra Thornton (GBR) got caught out in the first phase picking up four faults on Charielle. The well-known combination of Simon Delestre (FRA) and Hermes Ryan rolled the last fence of the triple combination causing it to fall, this costly fault meant they also wouldn't progress into phase two. Bertram Allen (IRL) and his reclaimed mount Quiet Easy, Laura Klaphake (GER) and Wilm Vermeir (BEL) also had this pole down.

Giulia Martinengo Marquet (ITA) was the first to make it into the second phase with her scopey grey Courage des Fegie. The pair set a fast time of 24.83 seconds but picked up an unlucky four faults meaning they fell outside of the top 20.

The first double clear was picked up by under 25 rider Kim Emmen (NED) and her 9 year old mare Farah, however, they didn't stay in the lead for long as Constant Van Paesschen (BEL) and Vendetta cut over three seconds off her time and crossed the finish line in 23.32s.

Unexpectedly Micheal Whitaker (GBR) had to do an extra turn on his 8 year old Freud del Cabanon in the second phase forcing them to also pick up time faults putting them right down the order. The drama continued when Spencer Smith's (USA) Idee-Fixe d'Exaerde slammed the breaks on at the oxer in front of the entrance to the arena before coming back around and clearing it with ease.

Young gun Harry Charles (GBR) was half a second over the time allowed in the second phase to finish with just one time fault on his 13 year old Borsato while Darragh Kenny (IRL) took all the tight inside turns on Scarlett du Sart Z but couldn't quite match the pace finishing in 9th overall.

Ben Maher (GBR) and Laura Kraut (USA) stopped the clock on exactly the same time of 24.35 seconds picking up joint 7th on F One USA and Berdenn de Kergane respectively. Unfortunately, the penultimate fence fell for the very popular combination of Daniel Deusser (GER) and Calisto Blue - they will be back tomorrow for Super Saturday to try and finish higher up the leaderboard.

Local hero Emanuele Gaudiano (ITA) wasn't holding anything back on his notoriously quick mare Carlotta. The fast and furious pair were two seconds faster than anyone else but the second to last fence fell putting them out of contention for the win today. One of the fastest riders against the clock Julien Epaillard (FRA) flew into the lead on his 11-year-old Queeletta with a time of 22.03 seconds leaving the rest of the field having to chase hard.

But it was the flying Frenchman Julien Epaillard who takes his 8th win on the 2019 LGCT season.

GCL Rome Round 1 will commence at 16.15 local time so make sure to tune in to GC TV on our website to watch all the action live and for free.