Empire Strikes Again Ahead of Super Saturday in Cannes 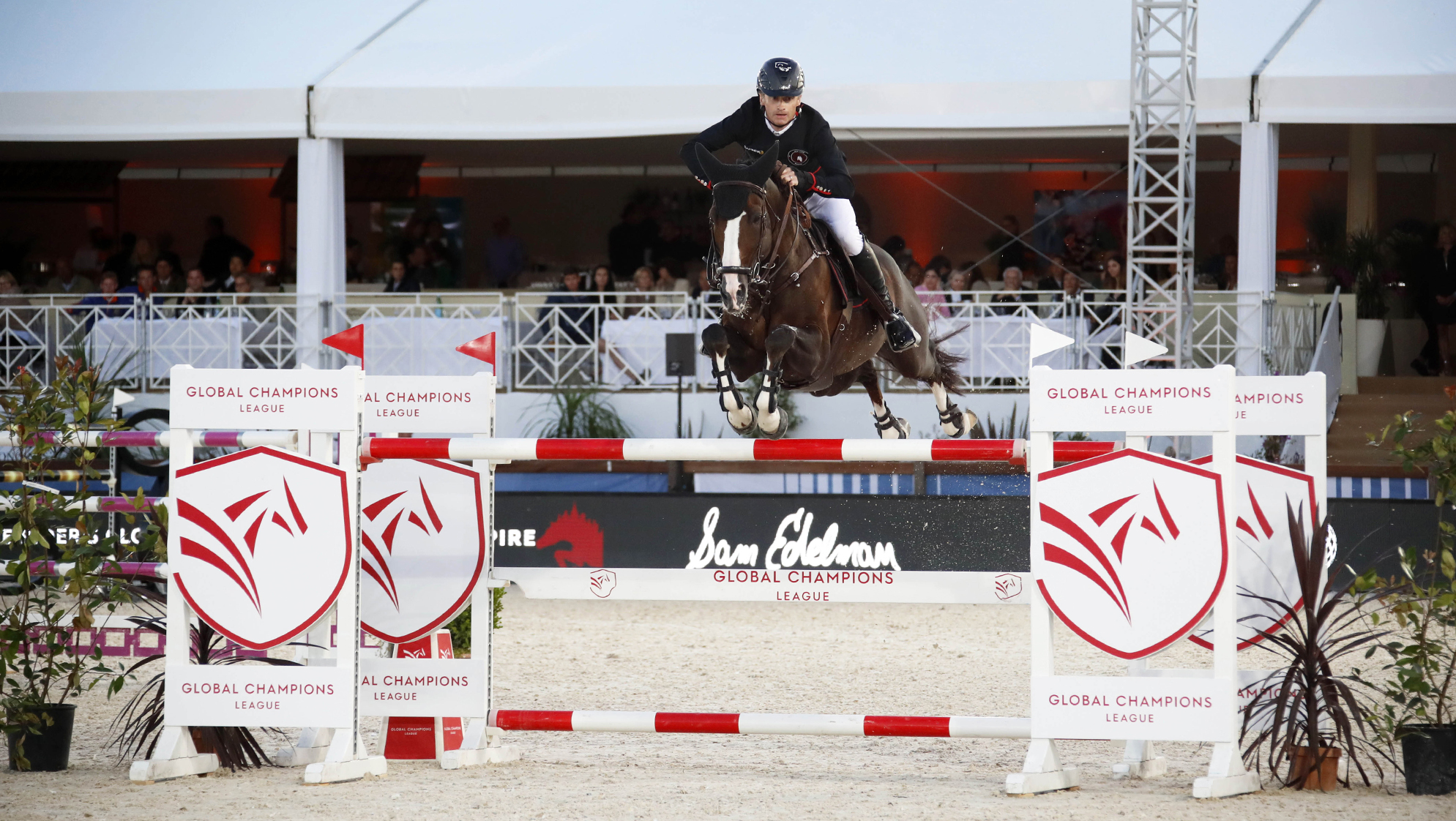 New York Empire clinched pole position for the third event in a row setting up a spectacular showdown at the GCL in Cannes on Saturday evening.

Under a stunning crescent moon on the French Riviera the team competition was a night of dramatic upsets and unusual results as top teams stumbled.

But Denis Lynch and Hans-Dieter Dreher were in a determined mood and threw down the gauntlet to the other 15 teams with a double clear matched only by second place father and son stars Eric and Maikel van der Vleuten.

Dreher said: “We had a very good start today. Denis had a top clear round, I was really motivated.” Denis added: “It’s fantastic, great team mates. I’ll get a good night’s sleep and stay focused for Saturday.”

A raft of teams finished on four faults as the pressure mounted during the tense competition under floodlights next to the world famous Croisette. London Knights led the charge of the four faulters eclipsing the times of Hamburg Giants, Prague Lions and Miami Celtics.

Saturday will see a ferocious battle for the honours at leg 7 of the season in Cannes with several team in with a fighting chance to dislodge the leaders.

This is how GCL R1 unfolded:

Paris Panthers
First rider to go Yuri Mansur piloted the 12-year-old Casantos for the path-finding first round of GCL Cannes. But the poles quickly fell, including the final part of the tricky triple combination and the Panthers were soon on 12 faults. The pressure was on second team member Gregory Wathelet to finish clear with Full House Ter Linden Z, to help keep their hopes of a fighting start on Saturday alive. And he delivered, keeping the Panthers on a total of 12 faults.

New York Empire
New York Empire, the team who took pole position last week in Hamburg, first fielded Denis Lynch - the Irishman riding the 16-year-old Van de Vivaldi. The dark horse leapt his way around the course as the floodlights shone and the pair delivered a strong clear, giving the team the best chance possible. Hans-Dieter Dreher was fast from the start and skilfully piloted Prinz over the bogey fences and finished off their double clear in quick fashion in 140.93 putting them into the lead.

Doha Falcons
Bassem Mohammed and his regular ride Gunder suffered four faults at the delicate dark vertical and were too tight to the combination, finishing on 8 faults and piling pressure on teammate Bronislav Chudyba and New York. The pairing had an early knock down and were unsettled leading to another four faults at the back rail of the purple and white oxer followed by the troublesome middle part of the triple combination. The team were left on an unhappy total of 24 faults way down the order.

Miami Celtics
Jessica Springsteen set off on a great ride on RMF Cecile in the early part of the course but the combination were one of many who fell victim to the fragile GC vertical finishing on 4 faults. Harry Charles, the Celtics’ U25 rider at only 19 years of age made his debut in Doha and the pressure was on for the team ranked 3rd so far. The youngster worked hard to keep ABC Quantum Cruise on a clean sheet and was justly rewarded with  a clear round leaving the team on 4 in 152.55.

Madrid In Motion
Eric van der Vleuten was first in for the super talented father and son combination riding Wunschkind. The pair, like many, took seven strides to the Longines combination and Eric’s experience paid off guiding the horse beautifully and fast to a well-managed clear round. Maikel van der Vleuten and Verdi were as strong as ever under pressure delivering the necessary clear with panache, but at 145.07 they were slightly slower than New York Empire putting them into second place.

Cannes Stars
The home team were fired up to deliver for the local fans but it was not to be their night. Karel Cox and the 10-year-old Evert looked powerful from the start and produced a strong clear round mastering the sand arena course in style. Margie Goldstein-Engle and Dicas had a night to forget clocking up expensive faults at the tricky triple combination putting the team on a disappointing 16 faults.

Berlin Eagles
Christian Kukuk and Quintino set off smartly but had an early disappointing fault at the sixth fence. And then the round unravelled. The pairing took down rails at the middle and third parts of the bogey triple combination final as well as a vertical and the purple and white oxer for 16. Young Danish U25 rider Emil Hallundbaek was in damage limitation mode on Chalice but his impressive round was marred by 4 faults at Constance Hotels vertical and a time penalty leaving the team on a total of 21.

St Tropez Pirates
There was drama for St Tropez Pirates, sitting second on the overall GCL ranking going in to Cannes following a big win at the last leg in Hamburg. Edwina Tops-Alexander and her star performer California delivered a beautifully balanced performance and an impressive clear. But there was a dramatic upset as Pieter Devos and Jade v Bisschop took down the back rail of Longines double combination and after coming tight to the triple the front rail of the middle oxer fell followed by a further four faults leaving the team in the doldrums on a total of 12 but fractionally ahead of the Panthers on time.

Chantilly Pegasus
Roger-Yves Bost and Castleforbes Talitha suffered four faults knocking the first rail on an angle at the purple and white oxer. The combination looked unsettled from there and suffered faults the first and last parts of the triple combination leaving the Frenchman on a total of 12. Carlos Lopez and Ulhane de Conde had to stop the score rising and also fell victim at the middle oxer of the triple combination pushing the team to 17 including a time fault.

Shanghai Swans
The Swans came into Cannes sitting pretty on top of the podium with two GCL wins under their belts so far in a team with strength and depth. But Peder Fredricson and H&M Christian K had the front rail of the Maurice oxer down for an early 4 faults. Daniel Deusser followed to try and keep the team score from sliding further. Riding Calisto Blue, already producing five clear rounds this season, he was on course for a strong ride but picked up 4 faults at the Cote d’Azur oxer putting the team on 8.

Scandinavian Vikings
Danielle Goldstein and the grey 10-year-old mare Jativia knocked the delicate GC vertical for 4 faults and then the round fell apart as they also fell foul of the challenging triple combination finishing on an uncharacteristic 20 faults. Leopold van Asten riding VDL Groep Zidance made a fantastic job of limiting the damage in a night of upsets. Superb riding on the impressive 15-year-old bay ended in relief with a clear round. Final total 20.

London Knights
Olivier Philippaerts and H&M Cue Channa 42 blasted into the ring determined to scatter the opposition. But the Constance vertical fell for a painful four faults heaping pressure on teammate Ben Maher.  The Knights’ star striker fielded the exceptional Explosion W once again the champion chestnut delievered. An sharp inside turn to the Hubside fence was important in keeping them ahead of the other teams on four faults as they finished in 138.40 putting them in 3rd place.

Monaco Aces
In another upset French star Julien Epaillard and Usual Suspect d’Auge clocked up four faults at the first part of the Longines double combination and then added to their woes with the back rail of the Air Mauritius and Cote d’Azur oxer for a surprising total of 12. Marlon Monolo Zanotelli and Sirene de la Motte took a very tight turn to the GC upright but amazingly the pole stayed in the cups despite a hard knock. There was intense pressure to stay clear and be fast and they delivered for their team.

Valkenswaard United
Bertram Allen and Izzy by Picobello took up the reins for last year’s winners Valkenswaard United but it quickly unravelled as the Hubside fence tumbled and the middle part of the triple combination and another fence for a surprise 12 faults. Marcus Ehning, riding Cristy, tumbled the back rail of the Maurice oxer and the front rail or the purple and white oxer as well as the middle part of the triple combination leaving the team on a shock total of 24.

Prague Lions
Niels Bruynseels and Gancia De Muze set off at a feisty pace producing one of the best rounds of the night, including a superb performance through the triple combination putting the team in a great position. Gerco Schroder and his long-time partner Glock’s Cognac Champblanc looked solid but despite their experience they end up another victim at the triple combination with the team finishing on a total of 4 but with their time of 149.60 ahead of the Celtics and in 5th place.

Hamburg Giants
Simon Delestre and Filou Carlo Zimequest were out of the starting blocks at speed but even this experienced duo came a cropper at the final part of the triple combination for four faults. Bart Bles, who already delivered three double clears for the team so far this season, put in another crucial round and finished clear on Gin D leaving the team on a total of 4 in 146.13 into 4th place.

The second round of GCL Cannes will take place on Saturday at 18:00 local time, tune in to GC TV live and exclusively to watch the action unfold on the French Riviera.