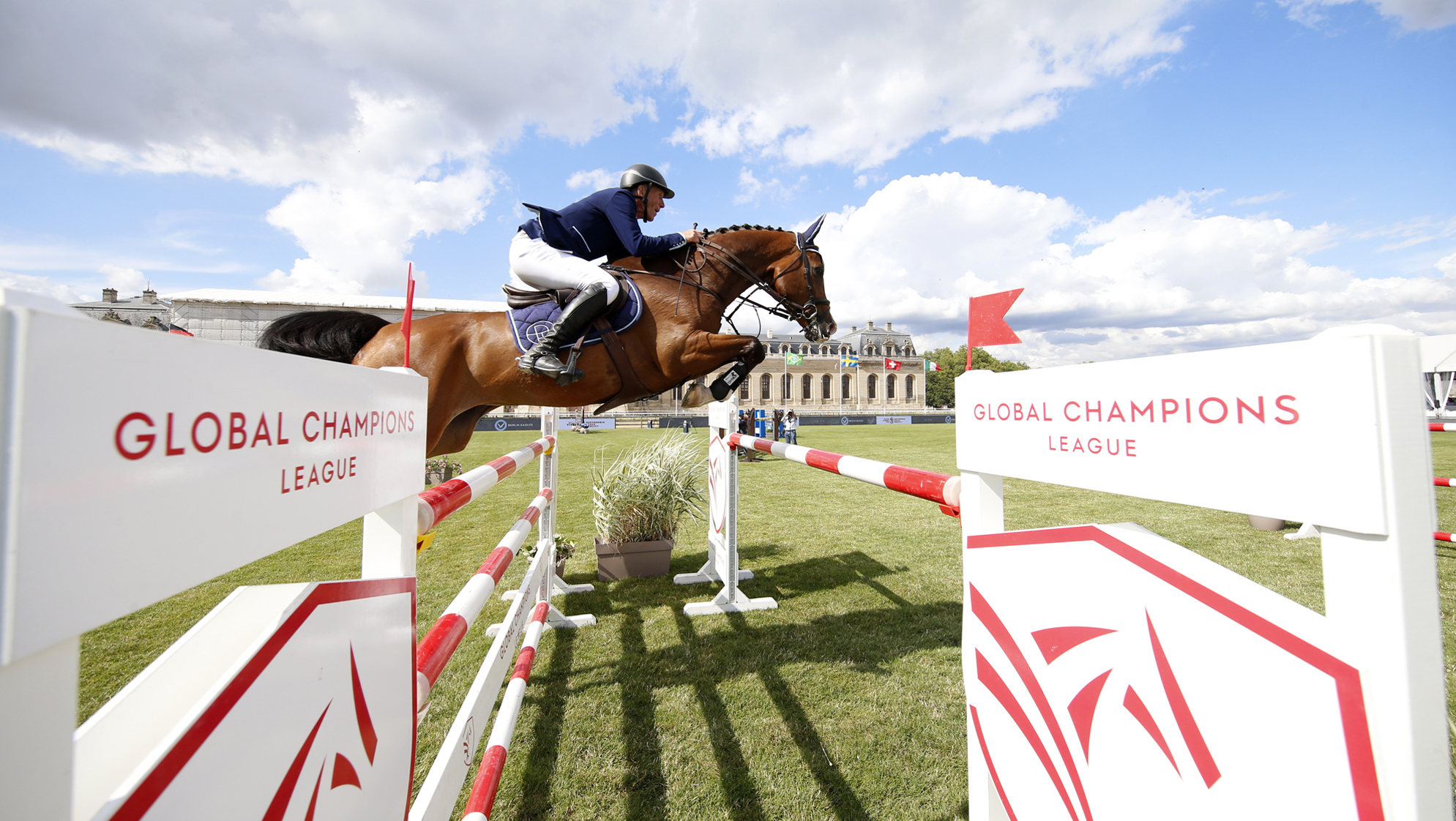 Berlin Eagles’ formidable duo of Ludger Beerbaum and Christian Kukuk flew to pole position at GCL Chantilly today, the fastest team on a flawless score in the French 'Capital of the Horse'.

The Eagles swooped to the top spot ahead of Miami Celtics’ pairing of Michael Duffy and William Whitaker - the Celtics hoping to keep their dream of taking the Championship lead alive. Valkenswaard United were the fastest of the 4 faulters after Marcus Ehning and Bertram Allen pulled off a blisteringly fast round with top horses Comme Il Faut and Molly Malone V.

Speaking after their results today Christian Kukuk said: "We had a very good day today, we can be really happy, Ludger and I. Our horses felt great, but we saw last year that we could be in the lead on day one but not on the second, so it’s for sure not over but we have a good feeling."

Ludger Beerbaum agreed: "I like the big grass arena and Chantilly is one of my favourite shows. But that doesn't mean it will help us win! Until now in the season we’ve had several good days but we’ve not had two great days, so I hope tomorrow evening we will be celebrating."

Uliano Vezzani set a big open course, with inviting long distances and with a few delicate verticals towards the end - meaning absolute control was order of the day in the galloping grass arena. As the sun beamed down, the picturesque Chateau de Chantilly played host to the 12th round of action in the GCL race for supremacy, the beautiful Royal Stables the backdrop to today’s competition.

Here’s how it unfolded…

London Knights
First to enter the ring and as the pathfinder for today’s competition was U25 rider of the London Knights Emily Moffitt with top gelding Winning Good. The fast-moving 10 year old horse powered around the arena, Emily keeping him well in check to complete the course clear. Nicola Philippaerts won the LGCT Grand Prix of Chantilly last year aboard top stallion H&M Chilli Willi, and once again brought out his 11 year old superstar for this leg of the Championship. But they were a little flat into the first double, the first vertical punched out and adding 4 to the team score. They would finish the rest of the course clear keeping the Knights on a score of 4 overall.

St Tropez Pirates
Team anchor Edwina Tops-Alexander was the first to go for the Pirates, bringing out the 10 year old Veronese Teamjoy again for this leg of action. The bay mare soared around the course, but it started to come undone at the GCL double, both poles falling, before they took out the delicate GC plank too. They would put the team on the backfoot with a score of 12, giving Pieter Devos all the pressure to go clear. With his chestnut mare Jade vd Bisschop, Pieter looked determined, clearly opting for a steady pace to try to leave all the fences up. They delivered, with the team keeping their score of 12.

Doha Falcons
Bronislav Chudyba was first to take up the reins with Lester IX, the bay gelding clearing the fences with an expressive flick of his tail. They produced a foot-perfect clear, with Bronislav punching his fist in delight after they crossed the finish line. Next to go for the team Michael Whitaker had a tougher ride on the 9 year old grey For Fun, Michael working hard to keep the mare steady and in a flowing rhythm. But the final part of the LGCT double came down, and a time fault gave the Falcons a costly 5 faults.

Chantilly Pegasus
Home city team Chantilly Pegasus brought out an all-French line-up with home hero in Roger-Yves Bost first for this crucial leg of the Championship. The experienced Frenchman would pilot Castleforbes Talitha, but the third fence fell, the back rail of the blue and green oxer coming down. It started to unravel, with the mare becoming a little strong and the pair would finish on a total of 16 faults. Teammate and new signing Francois Mathy Jr was next to go, with Uno de la Roque, and they delivered immediately - bringing home a clear to keep the team on 16.

Cannes Stars
Margie Goldstein-Engle and the big-striding Dicas were first to take up the mantle for the Cannes Stars - the pair taking on the course with enthusiasm and gusto. But the GC plank fell, just 4 faults added to the team’s result. Abdel Saïd was next to go with Etos HBC, but the first part of the LGCT double fell and the team would drop to a score of 8.

Monaco Aces
First to go for the Aces was Laura Kraut, the American rider giving Fleurette a beautiful ride around the course to finish clear. Jerome Guery’s Garfield de Tiji des Templiers were a little far off to the GCL double, the back rail coming down to give the Aces 4 faults. But due to Laura’s speedy time, the team would finish ahead of the Knights and shoot to the top of the leaderboard so far.

Madrid in Motion
Michael G Duffy and Chappo Chey were the first to take up the mantle for Madrid in Motion, but the troublesome first double came down, the vertical falling as they came in a little deep on the gallop down the hill. Mark McAuley was next to take on the challenge for the team with Jasco vd Bisschop, the 10 year old bright bay gelding. But it fell apart for the pain, and poles began to fall, the duo picking up an unusual 20 faults to plummet the team down to a total of 24 overall.

Shanghai Swans
GCL Ranking leaders the Shanghai Swans entered the arena together, their scarlet armbands proudly on display. First to go Pius Schwizer brought out Living the Dream, but the oxer of the GCL double fell after they added a stride - the team dropping to a score of 4 faults. Teammate Shane Sweetnam brought out his 9 year old Kirschwasser SCF - a horse with a big stride well suited to the grass arena. But there was heartache as the penultimate fence fell, the second part of the LGCT double falling to put the team on a total of 8.

Valkenswaard United
Valkenswaard United brought out the big guns with Marcus Ehning and Bertram Allen teaming up once again. First to go Marcus opted to ride Comme Il Faut, the charismatic stallion small but well suited to this fast, flowing arena. Marcus was able to really let the punchy stallion shift up a gear, sitting quietly and maintaining absolute control throughout as the horse jumped his heart out for the German maestro. But they came a touch too close to the GCL double, the front rail of the oxer falling and putting the team on 4. Bertram brought out top mare Molly Malone V and the duo delivered, bringing home the clear to finish on 4 today but the fastest so far.

Paris Panthers
Yuri Mansur entered the arena with his striking dark bay Carlson, the almost black horse trotting proudly into the arena. Yuri kept it steady to the first of the doubles, but their calm attempt didn’t work and the first pole fell, 4 added to their score today. Teammate Darragh Kenny piloted the 10 year old stallion Romeo beautifully around the course, the pair delivering a flawless performance to finish clear. Their time was good but they had to settle behind United in the final results.

Berlin Eagles
Christian Kukuk elected to ride his top stallion Limonchello NT for this round of action. Despite the horse sometimes drifting to and after the fences, Christian held him steady and the pair finished clear, passing the pressure to their teammate and compatriot Ludger Beerbaum. Never one to crack under pressure, Ludger looked focused as he cantered his 11 year old Cool Feeling round to the first fence. The pair kept a steady pace, the athletic horse curling over the fences to leave them up, and it paid off - the Eagles would post the first double clear of the day and shoot into the lead.

Prague Lions
First for the Lions was Marco Kutscher with top mare Chades of Blue, but the GCL double fell and the oxer fell to put the team on a score of 4. Wilm Vermeir piloted his top gelding Iq van het Steentje, but they too had an early pole before the second part of the LGCT double fell, the team dropping to a total of 12 today.

Miami Celtics
Ranking challengers Miami Celtics knew a good weekend at this point in the Championship could see their dream of taking the overall lead come true. First to go was U25 rider Michael Duffy with Mullaghdrin Touch The Stars, the big striding horse flying over the fences. With an effort over the final liverpool oxer, they delivered a clear, passing the reins to William Whitaker. William brought out another big striding stallion RMF Cadeau de Muze, the horse naturally slower but William taking the shortest route possible around the track. They kept it clear, finishing on a zero score but behind the Eagles on time.

Hamburg Giants
Simon Delestre was the first to go for the Hamburg Giants, the big striding Chadino his horse choice for today. But eight faults would put the Giants on the back-foot, with Lauren Hough and Waterford everything to do to keep the team in touch. Making her CSI5* return after injury, Lauren powered around the arena with the 16 year old gelding. But the GCL oxer fell in dramatic style, as did the first part of the LGCT double - the team would finish on 16 today.

Scandinavian Vikings
Following the transfer window period, the Scandinavian Vikings brought out their new secret weapon Henrik von Eckermann for this round of action, teaming up with Christian Ahlmann in a formidable line-up. First to go Christian rode Ciao Conni ST but they too came a little deep to the GCL oxer with 4 faults on the board. Henrik chose to ride Que Bueno de Hus Z, but an unusual 12 faults meant the team would finish on 16 today.

New York Empire
Final team to go New York Empire fielded Scott Brash first with Hello Senator, with teammate and owner Georgina Bloomberg watching on. But the second part of the GCL double fell, 4 added to the team score today. Teammate Spencer Smith would ride Theodore Manciais and they would pull off yet another clear for the team, keeping the Empire team in touch of a potential podium tomorrow.

Tomorrow's second round will take place at 14:15 local time, tune in via GC TV to watch the action live to see who will be crowds Kings or Queens of GCL Chantilly.