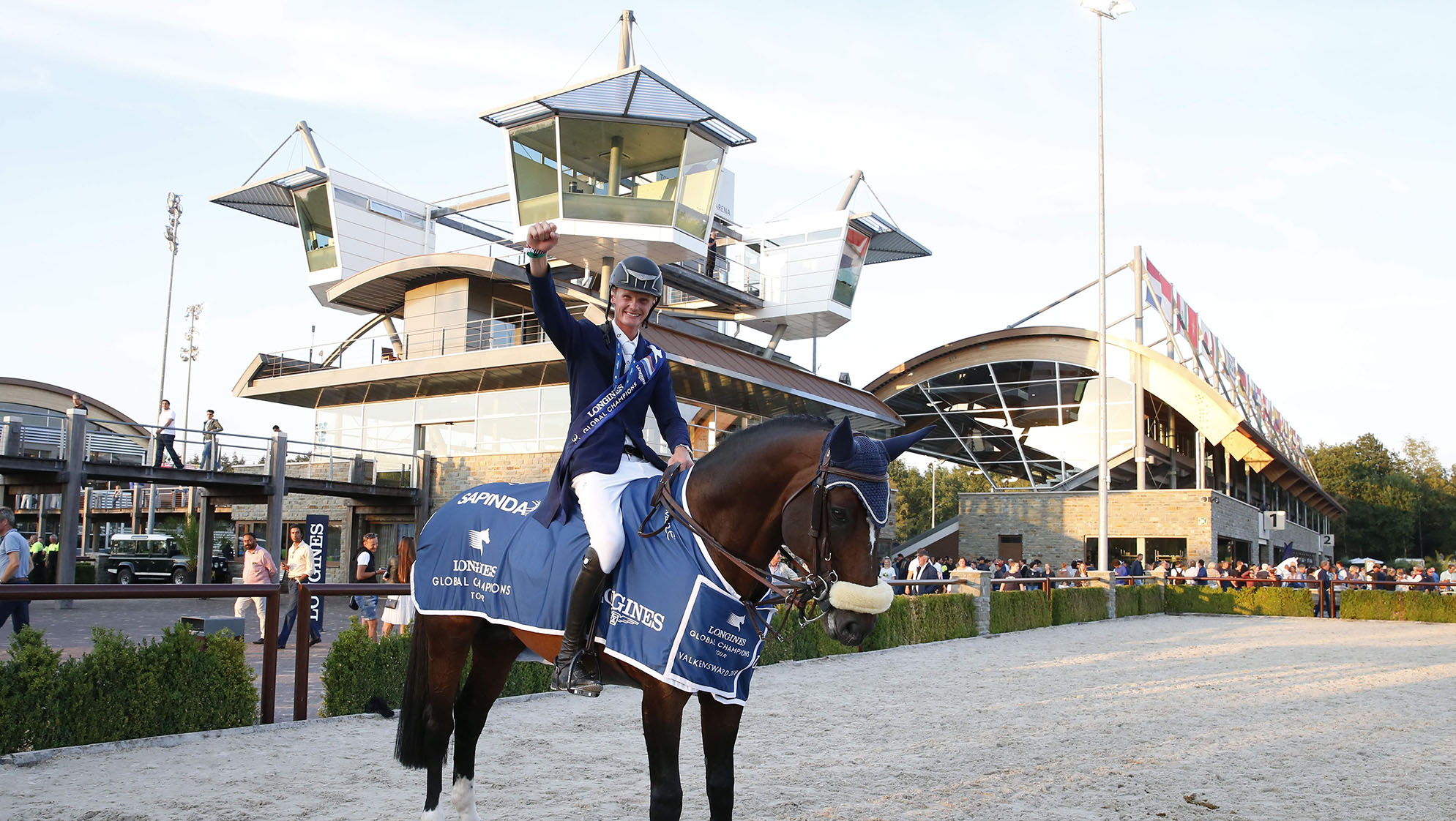 The 24-year-old Dutchman said he was “speechless” at his victory, which had the local crowd on their feet cheering during his lap of honour at Tops International Arena as he sealed a place in the GC Playoffs in Prague.

Schuttert said: “I am also speechless. It is my first 5* Grand Prix win. I was waiting for this moment and in front of a Dutch crowd it is amazing, fantastic and a dream come true. It is amazing, I never expected it. I am not in a global team (GCL) but maybe after today next year it would be nice!”

It was to be one of the most entertaining jump-offs of the turbo-charged season with only one hundredth of a second separating first and second place. With 11 top combinations into the jump-off at a pivotal stage in the championship series, the atmosphere was tense and the challenge was immense.

As the curtain went down Ben Maher (GBR) was still sitting on top of the overall LGCT championship ranking but did not clock up extra points in Valkenswaard allowing his rivals to edge closer.

It was clear early on that the course was a major challenge with tricky, delicate verticals and substantial oxers in a double combination all requiring supreme power and precision.

With the pristine sand arena bathed in early evening sunshine the stakes were high for the 14th leg of the circuit.

Super aerial views of the Tops International Arena facility played out on the giant screens and on TV as the action got underway in the Longines Global Champions Tour Grand Prix of Valkenswaard Presented by Sapinda.

German football legend Jürgen Klinsmann spoke of the “amazing venue” while visiting the event with his wife and 16-year-old daughter Laila who is a keen, aspiring show jumper. Speaking in the GC TV live studio Jürgen said: “Our 16-year-old daughter is evolving in the sport so we follow her all over the place. This place is unbelievable, beautiful, and to experience that is first hand is such a privilege. It is what sport is about, you get people together.”

Despite the level of difficulty set by course designer Uliano Vezzani there were more than expected clear rounds due to the high calibre field.

In a nation of cyclists, it was the light, narrow bicycle vertical fence that caused plenty of heartache in the arena. Other bogey fences included the double combination of substantial oxers and the delicate Stal Tops vertical.

With 34 starters, including several aiming for crucial points to bolster their positions at the top of the LGCT ranking, there was all to play for in Valkenswaard. There was disappointment for Pieter Devos (BEL) and Gin D and Edwina Tops-Alexander (AUS) riding California and Jur Vrieling (NED) on VDL Glasgow v. Merelsnest N.O.P. all clocking up an uncharacteristic 8 faults apiece.

And British rider Scott Brash (GBR), who won last weekend’s LGCT Grand Prix in London, suffered an unusual mix of faults and a refusal putting them emphatically out of the jump-off and any chance of climbing up from 6th on the overall ranking this weekend.

There was an inspiring early clear round from Alberto Zorzi (ITA) on Fair Light van't Heike on familiar ground at his training base.

Another impressive performance was delivered by Simon Delestre (FRA) as the French star and his champion horse Hermes Ryan flew through the Longines triple combination and polished off a formidable clear round.

They were followed by a super slick faultless round from Eric Lamaze (CAN) and Fine Lady 5. A powerful performance from Christian Ahlmann (GER) and his 11-year-old Tokyo added another spectacular combination to the jump-off.

A masterful round from Martin Fuchs (SUI) and Clooney 51 earned them a deserved place in the jump-off, with Martin commenting that his horse was “very relaxed and feeling good”.

To excited applause from the crowd in the purpose-built arena grandstands, Dutch rider Frank Schuttert and Chianti’s Champion made it look easy with an impressive clear pitching them into the jump-off showdown.

With Rolf-Goran Bengtsson (SWE) and Crunch 3 and Jessica Springsteen (USA) riding RMF Zecilie both going clear, all was set for a thrilling finale to the LGCT Grand Prix of Valkenswaard presented by Sapinda. Niels Bruynseels (BEL) and the small striding Cas de Liberte Z were one of the few to add an extra stride to the approach to the double combination of oxers and finished clear.

Adding to a stunning line up for the jump-off Marcus Ehning (GER) and Cornado NRW showed characteristic finesse going clear and Nicola Philiippaerts (BEL) and H&M Harley v Bisschop powered round to finish on a clean sheet.

The early starters set off at a lightning pace to force the formidable combinations that were to follow into mistakes. But it was to prove very costly. Alberto Zorzi and Fair Light van't Heike were super quick to the last but knocked the final fence for four faults in 39.35s.

Simon Delestre employed the same tactic with Hermes Ryan but it was to be an agonising four faults at the Sapinda vertical and slower across the finish line in 43.32. Eric Lamaze hit the accelerator but also clocked up four faults despite achieving the fastest time of the jump off in  38.11s.

Christian Ahlmann saw his chance to go clear and take victory but his time of 41.01s on Tokyo left the door dangerously open.

Dutch fans held their breath as young home rider Frank Schuttert and his 10-year-old bay stallion Chianti’s Champion delivered a smooth deceptively fast round stopping the clock in 39.89s as he punched the air in delight. It was his first ever CSI5* Grand Prix win, he confirmed later.

Rolf-Goran Bengtsson and Crunch 3 were unable to deliver the second clear and ended on four faults in 46.24s with Jessica Springsteen (USA) and RMF Zecilie knocking the Sapinda vertical and finishing on 41.45s. Niels Bruynseels looked threatening and thrilled with amazing acceleration on Cas de Liberte Z but still could not beat the leading time.

As the jump-off raced towards its climax Marcus Ehning and Cornado NRW cranked up the pressure and looked to be ahead but crossed the finish line in 39.90s - an astonishing one hundredth of a second behind Schuttert.

Last to go Nicola Philippaerts was the final contender for the crown and duly chased down sharp inside turns, but dropped the penultimate fence opening up an extraordinary Dutch win for Schuttert, who now has a coveted spot in the LGCT Super Grand at the GC Playoffs in Prague in December.

Jan Tops, Founder and President LGCT: “It’s super exciting. The horses gave their best, and the conditions were the best, to win against an eleven horse jump-off and by just one hundredths of a second - you can’t get closer! It’s fantastic to see new, young people [in the LGCT Grand Prix]. To win against these riders is amazing, so I’m very happy and proud for him to have qualified for the Playoffs in Prague. It’s nice to see someone further down the ranking who can still win a big bonus - he’s an amazing athlete and he deserves it. Ben and Harrie have the advantage in the Championship, Ben has great placings and his horses are in fantastic shape, so he’s the person to beat.”

Ben Maher, LGCT Ranking leader: “It’s getting close, and a lot could have changed around today. Valkenswaard wasn’t a planned show for myself, but my two horses have jumped a good few rounds now and the break is coming at a good time, take a breather and regroup so we can get a couple more points for the stages ahead.”

Talking about his GCL team performance earlier, (London Knights) Ben said: “It stays interesting - it’s the biggest sport there is in show jumping, and to say consistently good is very difficult. As a team we’ve managed to do that throughout the season - I thought I’d picked the right teams, but made a couple of little errors and things didn’t go our way this week. Luckily we had a big margin, which has been reduced, but I believe in our team and hopefully we can stay strong in the next leg.”

Christian Ahlmann, 3rd place: “It’s [Tokyo's] first season - he’s an amazing horse and improves from week to week. He did an amazing job yesterday and today, double clear in the Grand Prix and not so far away. He has no experience at this kind of speed, so he did very, very well and I’m super happy with him today. I got him when he was five, and he had three years off, and we started only one and a half years ago - so he did everything in almost two years to this level. It shows how special he is, how much character and how competitive he is. He’s a super horse for the future.”

Marcus Ehning, 2nd place: “Frank is a lot taller than me and that’s what [clinched] it! My horse jumped amazing and so I was very happy with second place. I didn’t see Frank’s round, but I saw Alberto’s as the time to beat. I don’t know where I lost the time, and the difference between us, but I’m really happy with my round.”

Frank Schuttert, 1st place: “It’s amazing to win here. I was already very excited to compete at the LGCT Valkenswaard and in front of my home crowd. It’s only my second Global Tour ever, I jumped here five years ago when I was still very young with my old horse Winchester. To win here, with this crowd and these amazing competitors - I would never have expected that! The idea was to go to WEG this year, and I’m really looking forward to that. To go to Prague is amazing - it’s a new show in the Global Tour, and to get only one chance, and to take that - it’s amazing. I wanted to try today. I think the start was a little slow, but after that I used his big stride and everything worked out. He gave everything for me, he’s only 10 and for sure it’s the fastest jump-off he did, so I’m excited for the future. Everything was meant to be today.”