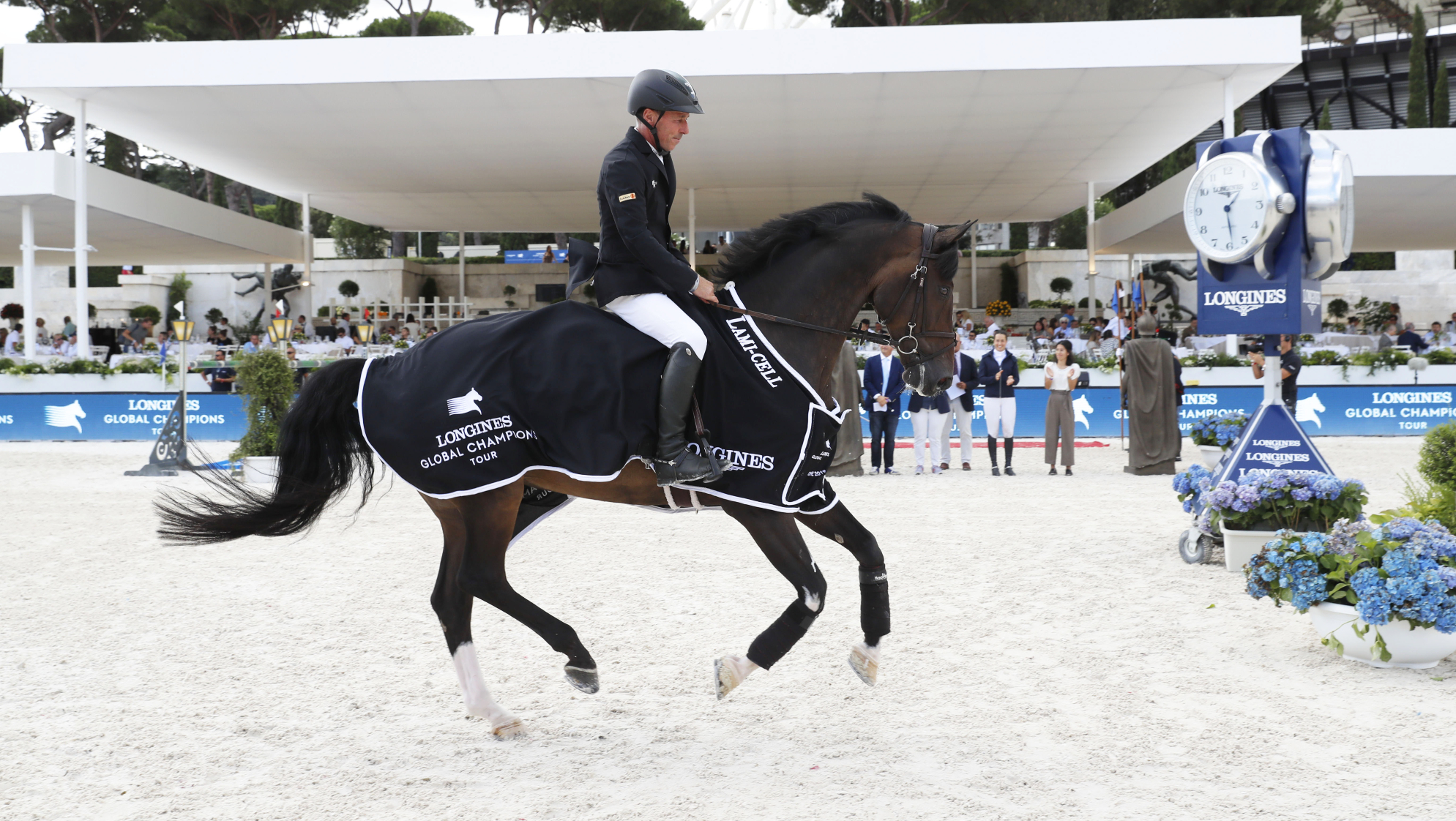 The final day of the Longines Global Champions Tour of Rome was another turbo-charged race to the finish line with an electric speed class to start the day. Seriously quick Hans-Dieter Dreher (USA) and Prinz soared to the top of the leaderboard as the only combination to crossed the finish line in sub 60 seconds while leaving all the fences up. Second place was taken by local hero Matis Alvaro (ITA) and Karel VDB while the third spot was picked up by young gun Laura Klaphake (GER) on Camalita.

Uliano Vezzani built a smooth and flowing 1.45m course for the lightning-fast speed class, with plenty of options for the riders to take if they wanted to cut the all-important milliseconds off their time. Fence three, a delicate plank, proved to be one of the biggest challenges on the course. 29 top international combinations came forward to tackle the penultimate class but only 10 clear rounds were produced.

First to test out the course was Cindy van der Straten (BEL). She was going for the time but unfortunately got too deep into the Colosseum double on Catalina, causing it to fall and putting them straight out of contention for the win. The first clear round was produced by Abdel Said (EGY) and Arpege du Ru in a time of 61.76 seconds. The pair made it look easy and stayed in the lead for quite a while but finished in 5th place.

The famous combination of Bertram Allen (IRL) and Quiet Easy flew round the first half of the course like a rocket before steadying up after the tall Italian Olympic Team upright fell meaning they weren't going to be on the podium today. It was Shane Breen (IRL) and Evita who looked like they were going to storm into the lead but a light touch at a wide oxer knocked it down and he crossed the finish line in 59.23 seconds but with 4 faults on the scoreboard.

The young German Laura Klaphake (GER) and Camalita were the first combination to beat early leader Abdel Saîd's time. They stopped the clock in 61.49 seconds but finished in third place overall. Flying Frenchman Roger-Yves Bost (FRA) put the pedal to the metal all the way round but the risk didn't pay off for him as Castleforbes Talitha got a little too flat and finished with 12 faults.

On form Darragh Kenny (IRL) also had a very unexpected 12 faults after looking like he was on track to be within touching distance on Scarlett du Sart Z. The tricky Colosseum double also caught out Amy Graham (AUS) and her bay Viti De Longa pushing them outside of the top 10. It was the striking combination of Christian Kukuk (GER) and his 8-year-old Creature who kept all the fences up but reached the 76-second threshold to pick up one time fault. Yesterday's LGCT Grand Prix of Rome winner Ben Maher (GBR) rode a foot-perfect clear round on his stallion F One USA to cross the line in 72.19 seconds.

The crowd cheered as home rider Matis Alvaro (ITA) flew into the lead on his 9 year old Karel VDB by just 0.05 seconds, however, it was last to go Hans-Dieter Dreher (GER) that took home the top honours today on his super speedy 11 year old Prinz. The fast and furious pair rode all the tight inside turns and left a stride out to the plank putting them straight on top of the poudium with a time of 58.69 seconds.

The final class of LGCT Rome kicks off 14.00 local time. Make sure to tune into GC TV on our website to watch all the action live.