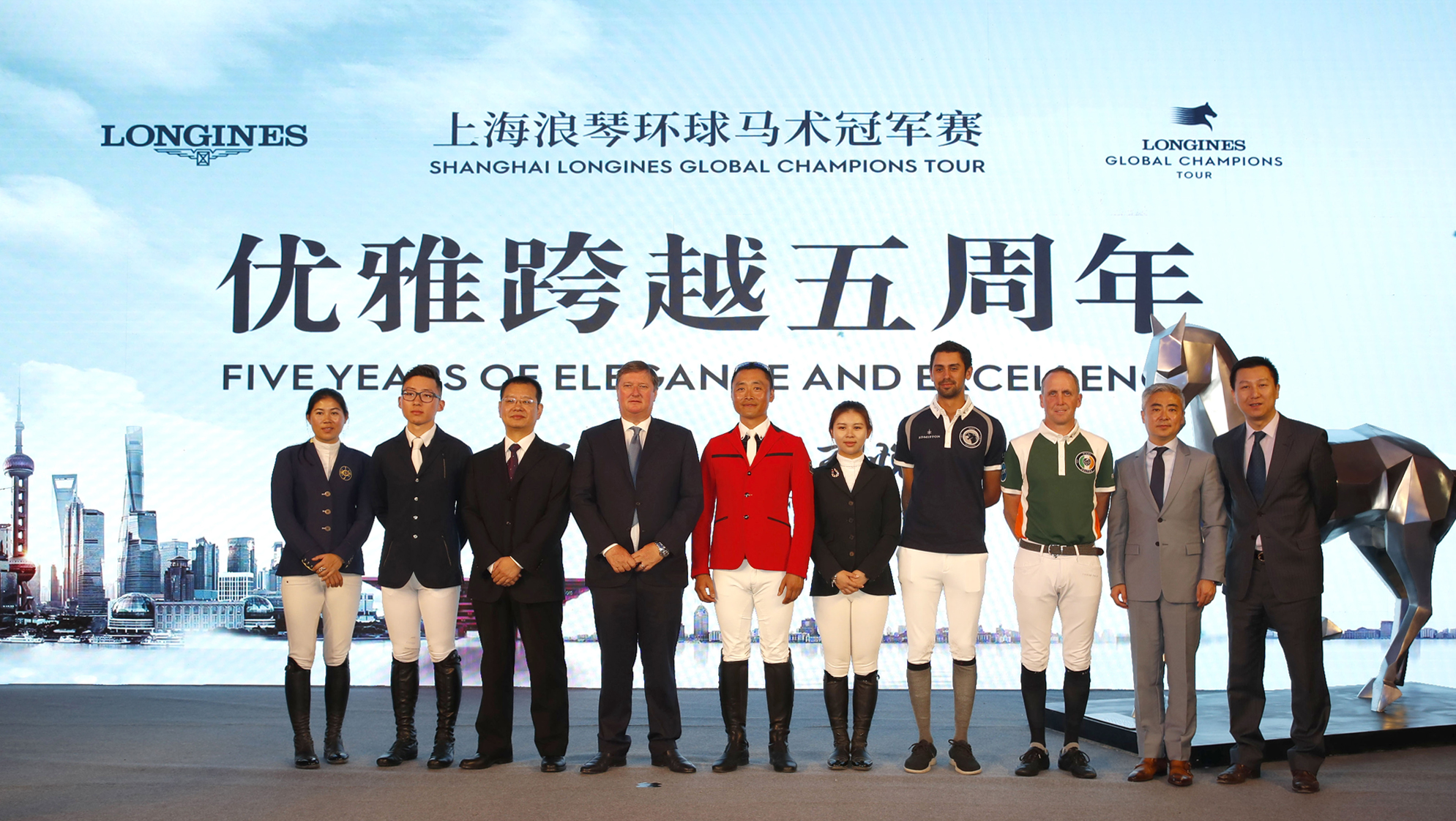 The impact of the Longines Global Champions Tour on equestrianism in China was the hot topic on the eve of the 5th edition of the event in the buzzing metropolis of Shanghai.

Dignitaries and riders spoke of the excitement generated by the arrival of the ground-breaking show jumping circuit five years ago, when a historic agreement was reached with the Chinese Government to allow international sport horses into China for the first time.

At a press conference ahead of the opening of the three-day event at Shanghai Pudong’s spectacular arena overlooked by the imposing red China Art Palace, new improvements to the high quality facilities were announced as spectator numbers increase each year.

Zhang Xing Min, Deputy Director of Shanghai Administration of Sports, spoke of the “great” LGCT event in Shanghai and said: “LGCT Shanghai is one of the world’s great show jumping events and the highest level of equestrian sport ever held in China and also has the greatest influence. Since 2014 it has attracted top riders to the city of Shanghai. It has been a carnival for all the fans of the sport and also the horse industry insiders.”

“At this year’s event in Shanghai we have around 60 of the top riders in both LGCT and GCL and also 4 Chinese riders who will also shine on their home ground. I wish the best of luck to all the riders and their horses and great success for the 2018 LGCT.”

With 98 top show jumping horses and 54 riders the world class event is expected to attract a new record crowd to the spectacular show ground. Equestrian clubs are increasing around China with aspirational middle class families embracing the sport of show jumping with more young riders signing up.

Jan Tops, President LGCT and Co-Founder GCL, said: “I want to thank our partner Juss Event and the City of Shanghai for organising such a wonderful event for the 5th year. I know how they have been in the last week with the Formula One and now hosting us at this wonderful venue.

“I know we have different horse power than F1 but with the horse power we bring you are going to see absolutely top sport this weekend. It is already our 5th anniversary here in Shanghai and it has been incredible what has been achieved. First of all we were the first to get horses over from Europe thanks to the Government and all the people involved. That was a real change of connection with China and for us it is very important to have this wonderful event here. It is one of the best organised events of the 17 this year.

“The riders are very prepared to get points here to go towards our Prague Play Offs which is something very new. As organisers we are very proud of the public. We have a new public we are educating and we see how much they enjoy it, how they dress up and love the sport and we are very happy to see this movement in the whole of China. This weekend you will see the best riders and horses all striving to get points for the Longines Global Champions Tour and the League to the final in Prague - I wish all the Chinese riders and everybody success.”

Patrick Yang, General Manager of Shanghai Juss Event Management, said: “Five years ago the Longines Global Champions Tour came to Shanghai for the first time. This has been a breakthrough in this industry and equestrian sport in China. We have seen it gaining more popularity and more influence among the general public and in the industry.”

Mr Yang announced further improvements to the stunning facilities at the Shanghai LGCT show ground to increase the enjoyment for the thousands of spectators attending the event, including extra covered grandstands for the growing numbers of visitors and this year the beautiful European village will have a French lifestyle theme.

Dennis Li, Vice President Longines China, said: “Firstly I would like to thank our partner Longines Global Champions Tour for having made possible the organisation of such a great show jumping event. This year. in front of the unique location of the China Art Palace. It is the 5th year in a row for Longines as Title Partner, Title Sponsor and Official Timekeeper.”

GCL Miami Celtics team rider Shane Breen said: “Five years ago I had the honour to come here to Shanghai, it is a great place, on day one when you did your round you got great applause from the spectators, great appreciation and by day three they had really got the understanding of show jumping and the competitive side of it. When they saw some great jump off rounds by the top horse rider combinations in the world they really did show their appreciation. For all the riders it is very comforting to ride in front of a crowd that appreciate what you do.”

GCL rider Nayel Nassar, a member of the Paris Panthers team which won in Shanghai last year, said: “I am really looking forward to it. Last year I had to watch from home on TV and I got to support my team from far away, which just shows you how far reaching the Global Champions Tour is. So far I am really impressed by everything as always with the LGCT. The facilities look fantastic and I’m really excited to be out there to defend our title here. And I’m really excited to see the public because on TV last year that really was fascinating, the place was completely sold out, the fans were extremely enthusiastic and cheering for the riders and I’m really excited to be a part of that this year.”

Raena Leung, one of the four local riders who will compete this weekend, said: “This is my third year at LGCT Shanghai - the GCT is the top show and the top league in the world. Everything is so well organised, especially as the horses have to fly here - the stabling, the quarantine zone - everything is just so well done it makes everything so much easier for everyone. It’s a privilege to be here."

All the action will be streamed via GC TV, featuring analysis, expert commentary and exclusive rider interviews. For the run down of the show schedule, please click here.