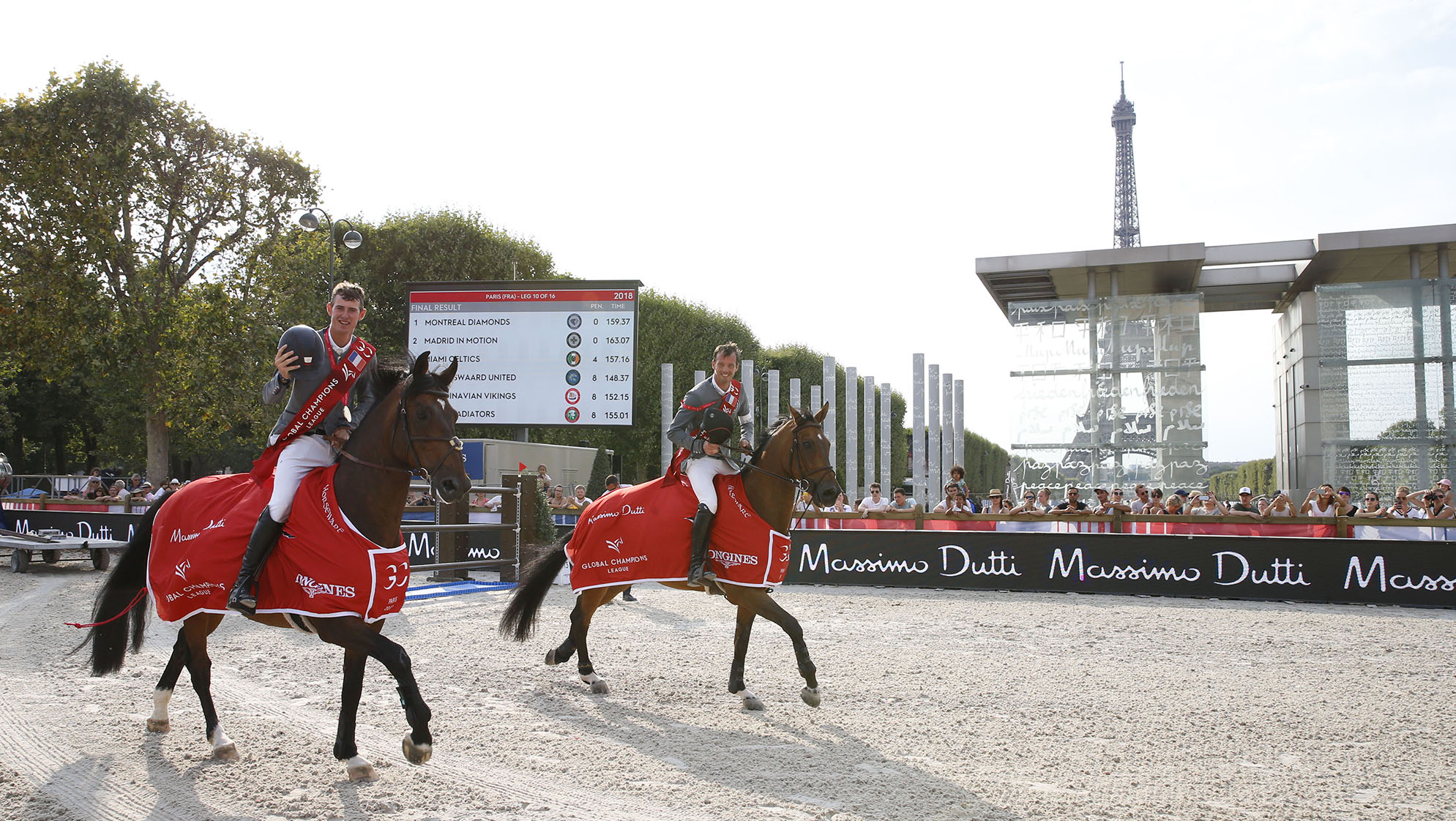 Temperatures soared in France’s capital city as Montreal Diamonds’ Harrie Smolders and Jos Verlooy kept cool under pressure to take their first win of the season at the GCL Paris.

With all eyes on the GC Prague Playoffs, where only the top 16 teams will qualify, the Diamonds’ win today has boosted the team’s chances of fast tracking to the quarter finals which sees the leading four teams guaranteed a place. With clear intent and full focus on the GCL, team anchor Harrie Smolders said: "We will be putting our best horses forward for the GCL -  that’s our first priority. It’s very close from 3rd to 7th, so there will be a battle to get into the top four - but that’s our aim and that’s our goal for the next few shows.”

And the Diamonds have started that campaign with vigour, moving up to fifth in the overall standings with 154 points, just one point away from the Scandinavian Vikings and Rome Gladiators who sit on 153 apiece and in joint third.

Following today’s results, the London Knights keep hold of the overall ranking lead, with a total of 214 points, 12 ahead of rivals Valkenswaard United who have 202 and have narrowed the gap slightly.

Italian course designer Uliano Vezzani put together a flowing but changeable track, with riders switching back and forth across the square sand arena. A gappy delicate treble set along the diagonal towards the impressive VIP hospitality required caution and power in equal measure, a huge oxer out needed bravery and scope. A yellow and black Renault oxer was set close to the far side of the arena, picking off a few of the combinations with less focus. The Massimo Dutti plank tumbled time and time again, and a Longines double crossing back along the arena towards the end of the track caught out a few as energy began to waver.

Fans filled the tall grandstands, nestled between the stunning backdrops of the Eiffel Tower and the École Militaire and with a perfect view of the action in the arena. With 11 teams sitting just a fence away from each other, every stride and calculated distance would count in the final result.

Prague Lions brought out U25 rider Anna Kellnerova who put in a strong ride on Silverstone G to collect just four faults. During this year’s transfer window the Lions signed up European Champion and LGCT Grand Prix of Cannes winner Peder Fredricson, and fielded their new striker in today’s crucial round. The Swedish star delivered, pulling out a masterclass of a round with Hansson Wl to put the team in the best possible chance of a significant points haul. Team manager Jessica Kurten spoke of the Lions’ pride at signing Fredricson: “For him to go in for the first time and go double clear, shows his dominance, so he’s very welcome on our team!”

Overall ranking leaders London Knights had an uphill battle following Thursday’s eight faults, with team anchor Ben Maher kicking off the charge with Explosion W. The British rider has won an incredible three CSI5* classes already this weekend, and continued his strong form with a foot perfect clear today before passing the baton to teammate Olivier Philippaerts and H&M Legend of Love, the grey mare jumping her heart out for the Belgian rider to deliver the first double clear of the day.

Home city team, Paris Panthers, soared around the arena - with riders Nayel Nassar and Gregory Wathelet opting for steady clears to help keep the team at the sharp end of the grid. An unlucky clip of the back rail for Nassar and Lutz added four to their score, and another four from Gregory Wathelet and MJT Nevados S meant they would be out of a chance of a podium.

A double clear from Miami Celtics’ Jessica Springsteen with RMF Swinny du Parc and Cameron Hanley with Quirex kept the green team on a score of four, with the rest of the world class field yet to come.

A tactical switch saw Simon Delestre and Hermes Ryan take the reins for Monaco Aces, but a pole for the popular French rider dropped the team down to eight despite their speedy round. Another pole from teammate Jerome Guery with Garfield de Tiji des Templiers put the team down the order on a score of 12.

Valkenswaard United knew a double clear from Bertram Allen and Marcus Ehning today would help close the gap to the Knights in the overall championship. Carrying four faults from Thursday, the team had to go clear to maximise their points tally this weekend, but a pole down from Allen and Molly Malone V at the GCL oxer dropped them onto a score of 8 - the same as the Knights. The pressure was on Marcus Ehning and Pret A Tout to ride fast and clear, to be in with a chance of finishing ahead of the Knights who were quickly rising up the order. The German maestro delivered, putting in a brilliant time to keep the team ahead of the Knights today.

First of the double clears, Madrid in Motion, took centre stage putting Eduardo Álvarez Aznar and Rokfeller de Pleville Bois Mar out in front. The pair delivered, opting for a steady and careful round which paid off - keeping a clean score and passing the pressure to teammate Marc Houtzager with top horse Sterrehof's Calimero. But the Dutchman kept his cool, piloting the expressive horse to another clear, shooting the team to the top of the leaderboard.

Montreal Diamonds were the penultimate team to go, with U25 rider and Jos Verlooy putting in a brilliantly quick clear with Igor. The young Belgian star gave teammate Harrie Smolders as much space as possible with the large striding stallion Don VHP Z, and the World Number 1 delivered, putting the team in first place with just the Hamburg Giants yet to go.

Sameh El Dahan of the Giants pulled out a magnificent clear with Suma's Zorro, with the win down to the wire as final rider to compete René Lopez and Twig du Veillon set off a steady canter. But two poles and a time fault would prove costly, dropping the team in pole position off the top of the leaderboard and off the podium.

So the win would go to the Diamonds, with Madrid in Motion in second and Miami Celtics taking third after a spell-binding afternoon of top sport in Paris. The League now look to Chantilly for the 11th round of action in the Championship, as the battle for a place in the GC Playoffs hots up.

Jan Tops, GCL Co-Founder: “This weekend showed real turbulence. There is a lot of pressure for the teams to move up as only 16 qualify for the Playoffs and everyone wants to be there. The Diamonds had a slow start, Harrie missed a few of the first events, but now he’s a clear round machine and he’s been amazing this season. London Knights are super strong with five very good riders, so they’ll be difficult to beat. It amazing to be here in front of the Eiffel Tower - it’s been amazing sport.”

Jessica Springsteen, Miami Celtics 3rd place: “We’re happy to be here. I had a rail the first day but Cameron jumped amazing and I’m excited to be on the podium. Hopefully we’ll keep having some good results and move up a bit. All my horses jumped amazing this week, I’m really happy with them and excited for Chantilly next week.”

Marc Houtzager, Madrid in Motion, 2nd place: “We had a good result and are happy with the clear rounds. We’ve moved up a little bit [in the rankings] so we hope to keep going like this. I’m happy to ride Sterrehof's Calimero and he’s on super form at the moment. We have a good team, good riders and today it came out well.”

Jos Verlooy, Montreal Diamonds, 1st place: “I was really happy today - it was my job to go clear, I thought Harrie would go clear so we just stuck to our plan. We want to win in Prague!”

Harrie Smolders, Montreal Diamonds, 1st place: “Now we have our strategy focused on the GCL. I think Don and Igor are in great shape at the moment so we had the feeling we would have a chance here which is why we took them. You’re never sure of a clear! I checked the time before I went in, and Jos did good so I knew we would be ok, but Don did a great job. We will be putting our best horses forward for the GCL -  that’s our first priority. It’s very close from 3rd to 7th, so there will be a battle to get into the top four - but that’s our aim and that’s our goal for the next few shows.