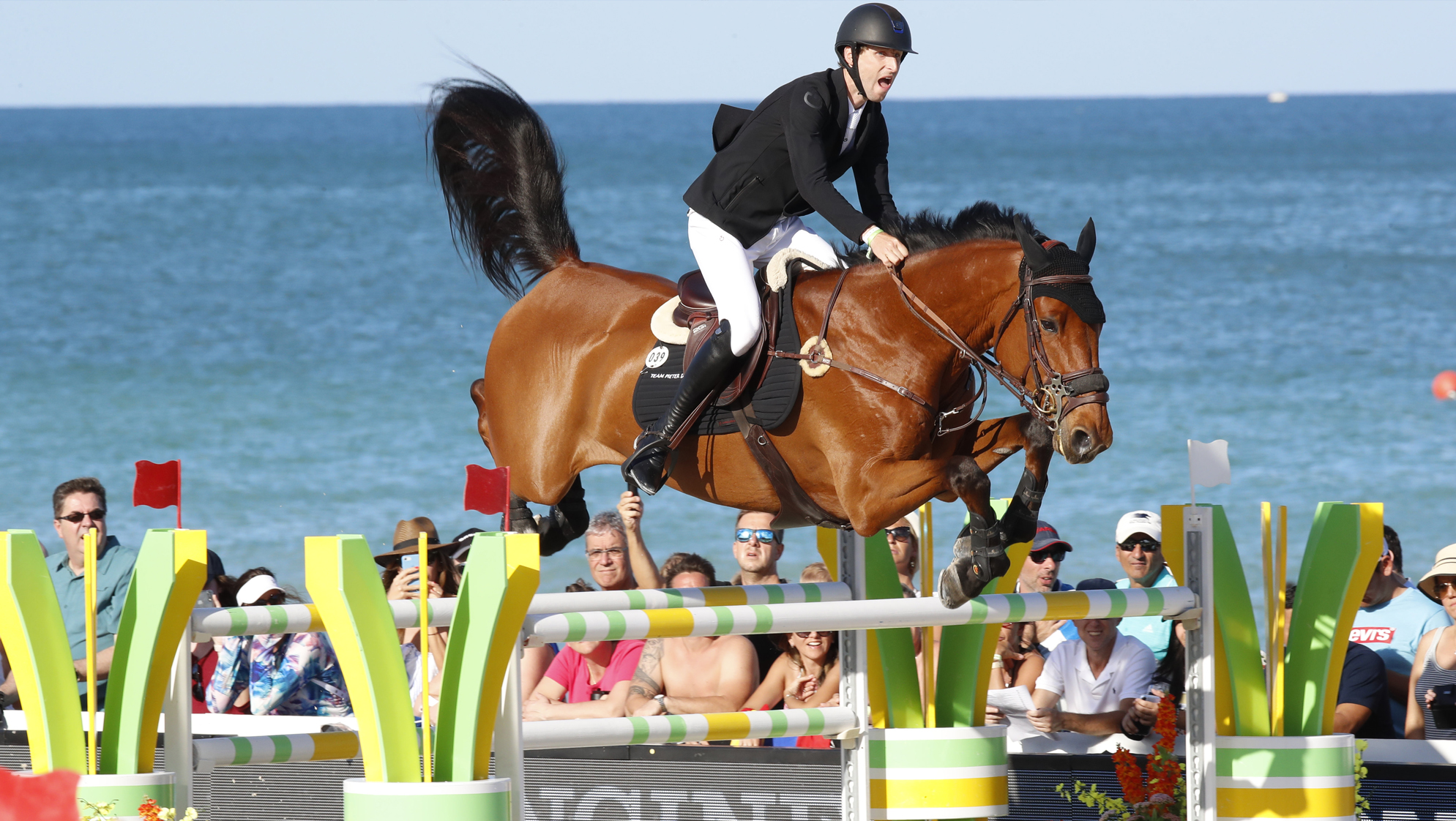 Belgian rider Pieter Devos was crowned the king of the Longines Global Champions Tour Grand Prix of Miami Beach, winning on the spectacular bay mare Claire Z after a nail-biting eight-way jump-off from the 32 starters.

Pieter’s supreme jumping display means he is now the LGCT series leader. Delighted, he spoke of the thrilling competition, featuring an A-list line up of the world's best athletes: “It’s the highest level sport here and the feeling I get is always the best. I am very happy to come back here; it gives me a super feeling to enter the arena and see the sea. It’s the best of the world here and that’s why I am so happy with my mare. I am so lucky.”

The showcase class was watched by packed crowds on all sides, including Bruce and Patti Springsteen and Bill and Melinda Gates, as well as bikini-clad beachgoers and enthusiastic local spectators, all just a stone’s throw from the glistening turquoise Atlantic Ocean.

Speaking about the spectacular venue, Jan Tops, Founder and President of LGCT said: "It is important for LGCT to be in the American market. America is a great horse nation. This is such a vibrant place. This is what the Tour is about, each week it is different. If you win the circuit you are an all round Champion."

As the sixth rider to tackle Uliano Vezzani’s testing and twisting jump-off course, Pieter’s mare was quick over the ground and fast in the air, skimming over the fences without wasting a second. Three combinations managed double clears in this class, with second-placed Harrie Smolders (NED) putting in a thrilling round on the 15-year-old stallion Don VHP Z NOP, but finishing just 0.04 seconds adrift of Pieter. Sweden’s Malin Baryard-Johnsson finished third, putting in a smooth but slower clear on H&M Indiana.

“It was great sport today and I am so happy with how my mare jumped; she’s jumped everything clear this week,” said the 33-year-old Pieter, who had logged two top five finishes in the Longines Global Champions Tour Grand Prix of Miami Beach in previous years. “This is a super show and I gave everything in the jump-off but I didn’t take all the risk as I knew Harrie was a really fast candidate after me and I was a bit worried about that.”

Uliano Vezzani’s course was a long and technical track, with tight turns and fences coming up fast with no room for error. Faults were found all round the course. The course included a JustWorld International vertical, which was a charity initiative in partnership with Longines. Every time it was cleared, Longines donated 200 meals to JustWorld, which provides nutritional programs for children in need around the world.

Pieter had struggle to contain the exuberant mare’s enthusiasm, but has solidly clicked with her just recently, including logging a five-star class win at the previous show in LGCT Mexico City. “She’s jumping amazing since two weeks and in two completely different venues, both in the big grass arena in Mexico and here on the sand. She’s only 11 and she has a lot of energy; there’s more to come now that I am able to understand her and keep her quiet until the end of the course. I’m really looking forward to the future with her.”

Pieter’s supreme jumping display in Miami Beach means he is now the series leader, taking over from his compatriot Niels Bruynseels.

“Being series leader gives you a good feeling,” added Pieter. “I’m in the lead, which means I was consistent, but tomorrow I’ll have my feet on the ground again. It’s top sport so it’s not the same every week, but I am in a good flow at the moment.”

Harrie Smolders, who came tantalisingly close to the top step of the podium, said: “I knew I was fast at the beginning, but then I felt him get a little flat so I made an extra stride into the second last fence. It was a shame, but I can only blame myself that I didn’t catch the time because Don was again amazing. I’m not sure I will ever have a better horse than him again.”

Harrie adds yet another podium spot to his third-place in the LGCT Grand Prix Mexico City, proving the consistency of this talented horse.

Malin stepped on to the LGCT podium for the first time this season on another talented mare. “She’s truly amazing,” enthused Malin of the 11-year-old. “We only started jumping at this level at the beginning of last year. She’s getting better and better with every round and it gives me great confidence. I’m so happy to have a one-of-a-kind horse like Indiana.”

Australia’s Edwina Tops-Alexander was first to go on the 12-year-old California, the mare on whom she won this class both last year and in 2016. After a strong start, California tipped off the back rail of the Longines double with a hind toe, finishing on four faults and setting a fast opening time of 37.38 seconds.

Next in was the Belgian Olivier Philippaerts. He and the 10-year-old H&M Extra set sail on a forward stride, eating up the ground. They took a bold inside line and were well up on the clock, but the horse lost concentration and refused at the final fence. They came home in 46.77 seconds.

German rider Christian Ahlmann made a steady start on Take A Chance On Me Z, but shaved tight lines. But when the 10-year-old stallion clipped the upright of the Longines double and another upright, Christian had to settle for eight faults and a time of 42.47 seconds.

Fellow German Daniel Deusser on Calisto Blue was the only rider to take the daring inside turn from the first to the second fence. His round was clean until the 12-year-old gelding by Chacco Blue knocked the top bar off the black upright with his stifle and also toppled the last fence. They finished with eight faults and in a lightning fast 36.90 seconds.

Next up was the British Olympic gold medallist Scott Brash on the 10-year-old Hello Mr President, who was bidding to claim his 12th LGCT grand prix win. But two fences — the first part of the combination and the back bar of the final fence — tumbled, leaving them on eight faults in 37.02 seconds.

Next came Pieter Devos (BEL) on Claire Z, hungry to log the first clear. Claire stretched over the back bar of the double and flew round over the rest of the course, including a flyer at the last, to produce the first double clear of the class.

Swedish rider Malin Baryard-Johnsson was the penultimate rider to take on the jump-off. With a clear already on the board, she had to quickly decide on a tactic. Her athletic mare,  H&M Indiana, responded keenly, galloping to the penultimate fence and pinging high over the last. They were clear but slower, in 38.48 seconds, and went into second.

Last to jump was Dutchman Harrie Smolders on the big, careful 15-year-old stallion Don VHP Z NOP, the oldest horse in the jump-off. After a super fast start, he was ahead of Pieter, but added in a stride before the penultimate fence. Harrie broke the beam 0.04 seconds slower than Pieter, putting him into second by the slimmest of margins.