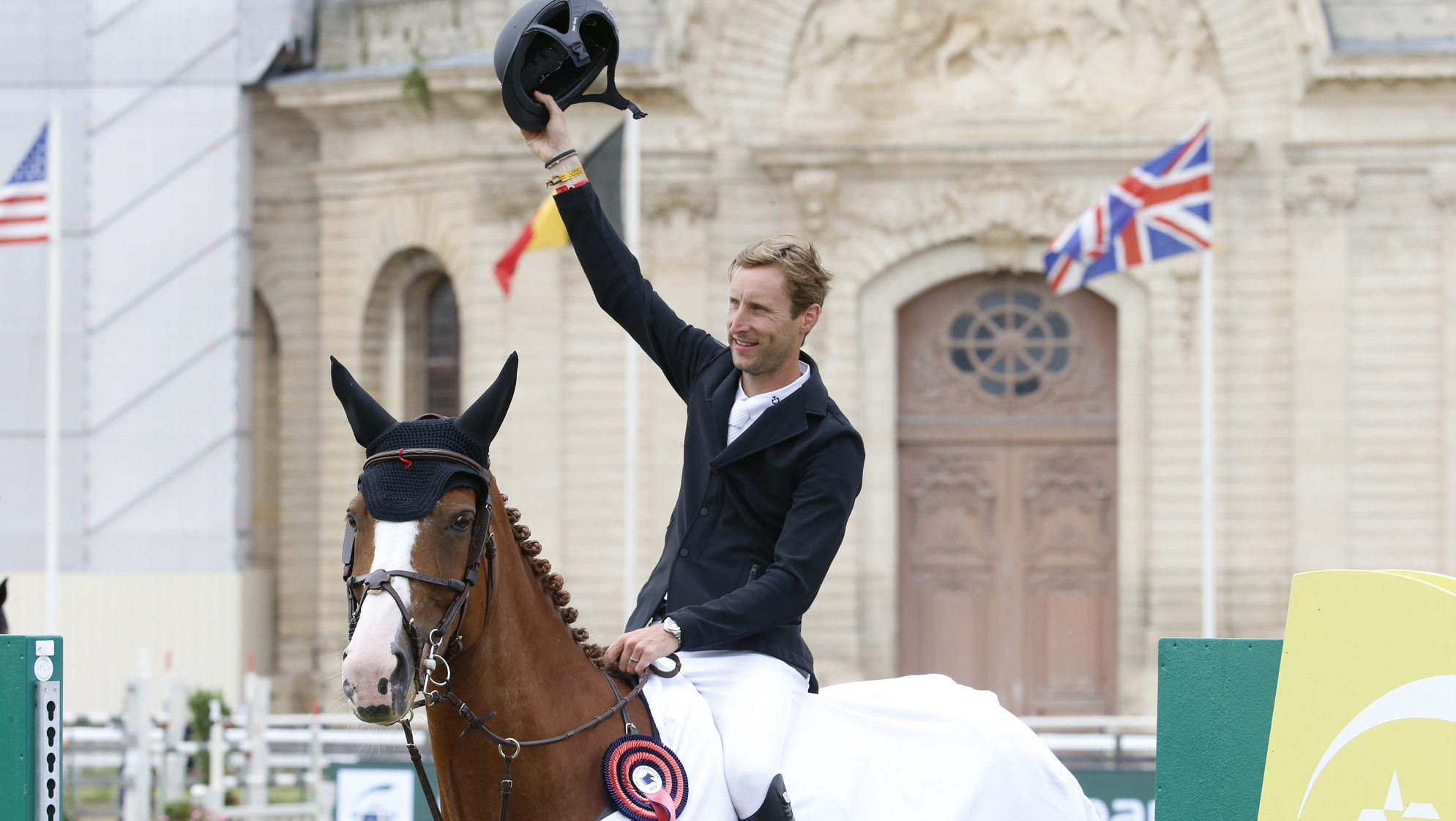 Pieter Devos (BEL) beat the crème de la crème of show jumping in the final day of LGCT Chantilly, finishing a turbo-charged two seconds faster than the rest of the field aboard his 10 year old mare Jade vd Bisschop.

A smiling Devos said: “I’ve won this class a few times now and I thought I’d give everything to win today. My mare was amazing, She was completely with me, she’s a great horse. I'm looking forward to [LGCT] Berlin, my horses are jumping very well and are in great shape, so hopefully we can do something good in the Grand Prix there. For now I will enjoy this win.”

Devos took the Master Groupama win from Spencer Smith (USA) with Theodore Manciais, who had the unenviable task of first to go in the jump-off. Third went to Yuri Mansur (BRA) with Carlson, while to the delight of the local crowd fourth and fifth went to two Frenchman, Pierre Alain Mortier (FRA) and Julien Epaillard (FRA).

On the final day of competition at the enchanting Chateau de Chantilly, Uliano Vezzani put together a deceptively tough track, a fairly short course but making full use of the expansive grass arena. A time allowed of 84s gave riders enough time to keep the pace calm, but also required some tight lines should they opt for the steadier pace. The skinny GC plank made its final appearance this weekend, and a light coloured treble demanded care and precision.

Pathfinder Spencer Smith (USA) put in a deceptively effortless round, his chestnut horse Theodore Manciais flying over the fences to produce the first clear of the afternoon. He was swiftly followed by William Whitaker (GBR) with RMF Charly, Yuri Mansur (BRA) with Carlson and Pieter Devos (BEL) with Jade vd Bisschop - four clears on the board out of four riders to compete.

Georgina Bloomberg (USA) and Quibelle looked on song to join those in the jump-off, but they had heartache at the last as the final oxer fell, dropping them out of the running. Home favourite Penelope Leprevost (FRA) clipped the RMC Sport oxer with Varennes du Breuil, they too without a chance of the win today.

The final liverpool-lined oxer would quickly become the bogey fence of the class, with Shane Sweetnam (IRL) and Kirschwasser SCF, Kim Emmen (NED) with Flock, Leopold van Asten (NED) with VDL Groep Elexia and Marco Kutscher (GER) with Boeckmanns Lord Pezi Junior all denied a place in the jump-off as it tumbled to the ground.

There would also be surprise retirements from the experienced combinations of Michael Whitaker (GBR) and El Wee Widge and Pius Schwizer (SUI) with Balou Rubin R.

First to return was young American rider, Spencer Smith (USA), and he and Theodore Manciais looked determined from the get-go. They kept it tidy and tight throughout the course, and took a daring sprint to the last - flying down the long gallop to cross the line clear in 40.57s.

William Whitaker (GBR) knew he had a slower horse with RMF Charly, so chose his lines carefully, opting for the tightest turns he could. But the pink and black vertical fell, with William backing off and giving RMF Charly a smooth and confidence building finish.

With the impressive dark bay gelding Carlson, Yuri Mansur (BRA) took his chance around the track. With his bright yellow jacket blazing in the sun, they built momentum throughout the course. Mansur steadied his horse to the double, before taking a tight turn back to the penultimate fence. A push to the last saw them close, but they couldn’t better Smith’s time, finishing in 41.54s.

On-form Pieter Devos (BEL) returned with his flashy chestnut mare Jade vd Bisschop, the 10 year old horse responding beautifully to his requests. They took the first on an angle, with Devos cleverly positioning the mare to the fences to make up time. They took a brave nine strides to the double, and rocketed up a gear to the final line, timing his strides perfectly to knock an impressive two seconds off the time. The new time to beat would be 38.94s.

Michael G Duffy (IRL) and Chappo Chey knew the pressure was on, but both parts of the double came down, ruling them out of contention today.

First of the French riders to fly the flag in this afternoon’s jump-off was speed demon Julien Epaillard (FRA). Returning to the ring with his chestnut stallion Virtuose Champeix, the Frenchman had a lucky rub at the start. They were up in the split time, but they took the penultimate turn too tight - groans from the crowd as the fence fell along with his hopes of a win today.

Michael Duffy (IRL) and Egalini took the handbrake off as they galloped to fence one. But they too were a touch too tight to the vertical, the pole falling to add four faults.

American star Margie Goldstein-Engle (USA) returned with her experienced 15 year old stallion Royce, the impressive bay horse gleaming in the sun. The big striding horse covered the ground, but couldn’t match the tight turns. The penultimate vertical fell for the duo, and they too would miss the chance of a win today.

Gerco Schröder (NED) and Davino Q had the LGCT vertical down, with Schröder settling his horse to give a confidence-boosting round, ready to come back stronger another day.

The final French hope for the win was Pierre Alain Mortier (FRA) and Uruguay Courcelle, the crowd cheering as they entered the grass arena. They took a tight turn to the Longines oxer, but were down at the split time by almost two seconds. Despite a brave gallop to the last, they finished in 44.81s.

Mark McAuley (IRL) and the grey Miebello had the LGCT vertical down, and another added to their woes, meaning they couldn’t fight for the win today.

Edwina Tops-Alexander (AUS) was the penultimate rider to challenge Devos’ time, with the 10 year old Casquell fresh and raring to go. They flew through the first part of the course, but were slower at the split time. A wider turn to the penultimate vertical didn’t help their attempt to clear it, the pole falling and the pair dropping out of contention today.

Final rider to go, Longines Ambassador of Elegance Jane Richard Philips (SUI) had all the pressure on her shoulders with Clipper du Haut du Roy. They flew around the course, the horse expressive in the air, but they too were down at the split time. The second part of the double came down, handing the win to Pieter Devos this afternoon.

The Championship race now gallops to Berlin, for the 13th round of action in the 2019 Longines Global Champions Tour and GCL season.