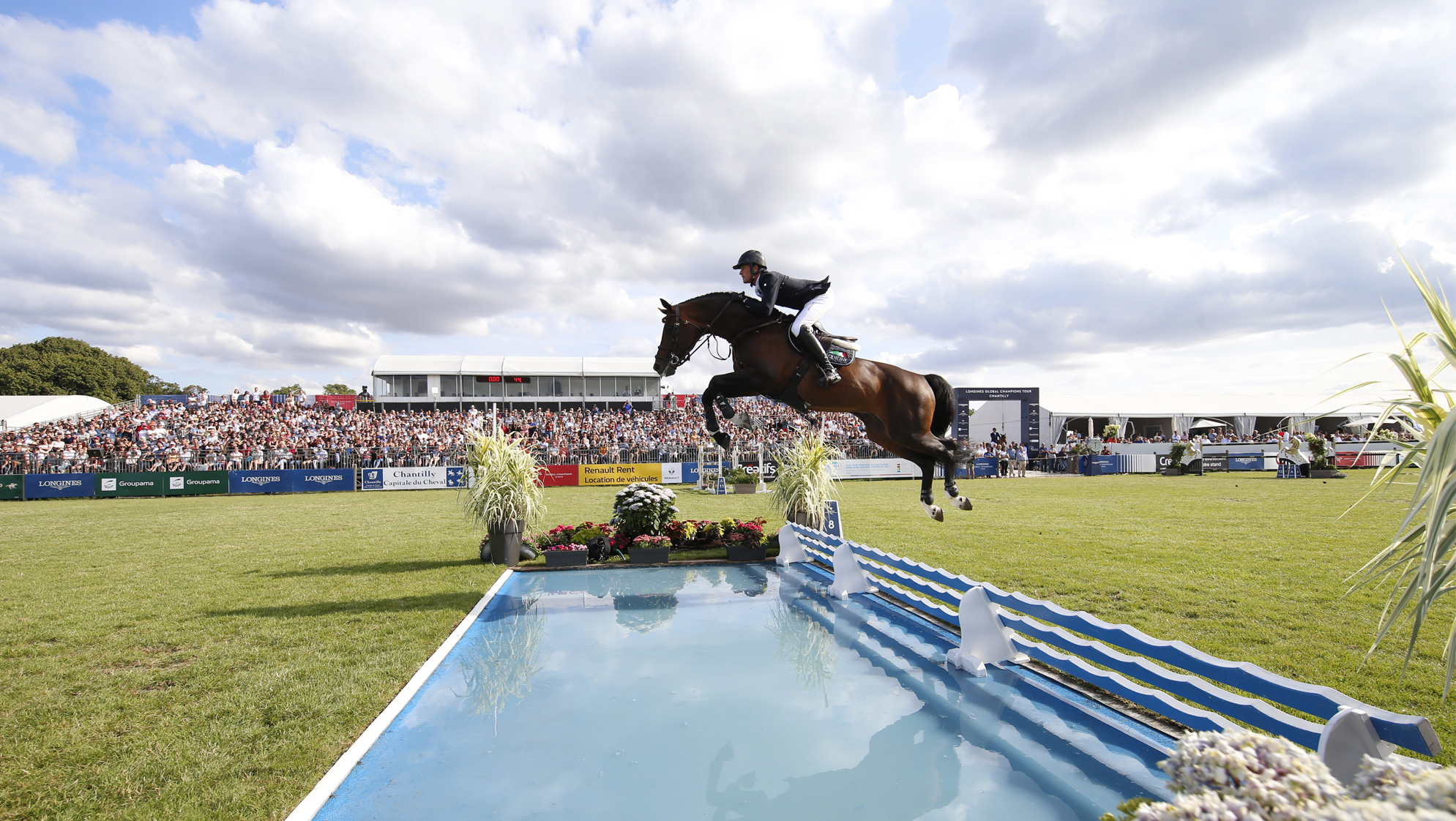 A beaming Darragh said: “I knew I had to be really fast with so many good riders after me. He (Balou) is very careful so I knew I could trust him. He is an incredible horse and he always wants to be clear and tries so hard and my owner was here, she's an amazing owner.”

Darragh’s win secured his golden ticket to the LGCT Super Grand Prix at the GC Playoffs in Prague in November, and he said: “I am definitely very relieved. The qualification for Prague is amazing. I really wanted to win it. Prague was an incredible event, one of the best shows I have ever been to. It was run fantastically. To have the opportunity to compete for that kind of prize money and prestige is amazing.”

French favourite Penelope Leprevost was a whisker from victory but ultimately could not match Darragh’s time and finished second on the podium with last year’s LGCT Grand Prix of Chantilly winner Nicola Philippaerts (BEL) and H&M Chilli Willi in third.

Penelope said: "I am very happy with my horse today. Last year he jumped his first five star Grand Prix here and I had one down, so this year he really has improved. I used to be so slow but now I’m not so slow! I am very happy but I didn’t do one less stride as it was a combination. If I could do it again I would try!"

Nicola Philippaerts said: "My horse jumped very good over all three rounds -  I tried to give my everything but it was such a quick jump-off. Chilli really likes the ring here, he loves the big arena and grass. I always love coming here, it really is a fantastic event. I went early on, I got to see Darragh jump and I tried to leave a few strides out to be able to go as quick but naturally I think my horse is a little slower in nature."

Packed grandstands flanked the stunning and expansive grass arena as the LGCT Grand Prix got underway with fans enjoying top-level sport next to the enchanting Chateau de Chantilly and Royal Stables in the centre of the famous racetrack.

It was a sublime setting for the 12th LGCT Grand Prix of the 2019 season with guests from around the world, including the US fashion designers Mary-Kate and Ashley Olsen, watching from the elegant hospitality lounge.

LGCT Founder and President Jan Tops said: “I thought this year the ground was amazing. You could go faster and the horses were very comfortable and jumping very good. It was a great win for Darragh.”

Chantilly was celebrating its 10th year on the LGCT series and Gerard Manzinali, President Chantilly Jumping, spoke of his “honour” at being on the circuit for a decade and said: “It was a very good day of sport and it was an exceptional jump off. Beautiful weather and a great public.”

Uliano Vezzani’s course featured a troublesome Longines treble, a bright blue water jump followed by a wide oxer. The delicate GC Plank vertical, which caused so many problems in the previous competition, once again made an appearance. The final line set along the grandstand and towards the in-gate would also claim a few victims with the big wide RMC Sport oxer requiring plenty of horsepower to complete the course.

Michael Whitaker (GBR) was the pathfinder for today’s LGCT Grand Prix, the British Olympic rider piloting the nine-year-old grey mare For Fun. But they were a little tight on the corner into the final fence collecting 4 faults at the RMC Sport oxer.

Leopold van Asten (NED) and VDL Groep Miss Untouchable looked on flying form, the elastic mare making beautiful shapes over the fences. But with faults at the delicate vertical in the second part of the triple combination and one of the many imposing oxers they were out of contention.

There were gasps from the crowd after Henrik von Eckermann (SWE) and Best Boy 2 miscalculated their distance and splashed into the water to ending their hopes. Michael G Duffy (IRL) had an unusually high scoring round with Lapuccino. And home hero Roger-Yves Bost (FRA) and his flashy chestnut Vino d’Espinet clocked up a raft of faults and exited the arena in disappointment.

Darragh Kenny (IRE) was on flying form with his 13-year-old bay stallion Balou du Reventon, delivering the first clear round of the competition in a spell-binding demonstration of horse and rider harmony.

Fresh from his GCL Chantilly win for the Berlin Eagles, Christian Kukuk changed to his other horse Quintino for this competition. But the horse spooked on landing at the first part of the Longines triple, Kukuk having to pull out of the second element at the last moment.

Last year’s LGCT Grand Prix of Chantilly winner Nicola Philippaerts (BEL) and H&M Chilil Willi powered around the arena with confidence, Philippaerts tempering his enthusiasm to place the stallion with pin-point precision to the fences. The crowd erupted in celebration as they flew over the final RMC Sport oxer, triggering a jump-off.

Another rider high on the momentum of a recent win was Christian Ahlmann (GER) and Take A Chance On Me Z, the duo hoping to repeat last weekend’s LGCT Grand Prix of Paris victory. But the first part of the Longines triple hit the ground, before they ground to a dramatic halt down the penultimate line.

New face on the Tour Christophe Vanderhasselt (BEL) guided the 11-year-old bay mare Identity Vitseroel carefully around the arena, the pair flying to the final fence to clear it in style and add their names to the jump-off.

Michael Duffy (IRL) and Egalini had a scary moment at the water, but the young Irish talent was able to keep control of the 10-year-old bay horse. An unlucky pole at the yellow and green gappy vertical would drop them out of a chance for glory today.

Gregory Wathelet (BEL) kept MJT Nevados S nice and tidy around the course, the winner of this LGCT Grand Prix in 2015 hoping to repeat his success in the ‘Capital of the Horse’ again. They too flew over the final fence, the Belgian clearly delighted with his stallion’s performance as they added their names to the jump-off.

British Olympian Scott Brash (GBR) brought out his talented 10-year-old Hello Jefferson, the fiery bay gelding attacking the fences with energy and enthusiasm. But there was heartache at the last, the back rail of the RMC Sport oxer falling as the crowd groaned in disappointment.

Simon Delestre (FRA) set off with his punchy grey gelding Filou Carlo Zimequest, the 10 year old horse leaping the fences with an expressive swish of the tail. But they took the angle a touch too tight to the skinny vertical, and a fence in the penultimate line would drop them down to 8 faults. He was joined by Nicolas Delmotte (FRA) with Urvoso du Roch, who also collected 8 faults.

But home spirits were lifted after Kevin Staut (FRA) pulled off an electric round with his 11 year old mare Urhelia Lutterbach - there would be a French chance in the jump-off.

Following a flawless previous class, Georgina Bloomberg (USA) unluckily had front rail of the early LGCT oxer down, and the second part of the penultimate double meant that she and Chameur wouldn’t be able to fight for a podium today.

Silence filled the arena as Penelope Leprevost (FRA) took to the track with Vancouver de Lanlore. They kept absolute focus to the last, and soared over the RMC Sport oxer, crossing the finish line to rapturous applause and with a huge smile beaming across her face.

Ben Maher (GBR) would have to finish 28th or higher to score enough points to take the LGCT ranking lead today, and set off with determination aboard top gelding Explosion W. They cleared the water in impressive style, before Maher quickly gathered up the big horse to make the fast-coming over look simple. But a fence at the penultimate double, and then the final RMC Sport oxer would mean they couldn’t contest the win today - however they would take the overall lead.

Bertram Allen (IRL) took an extra stride down the penultimate line, Molly Malone V just punching out the rail at the double of verticals.

Final rider to go Marcus Ehning (GER) brought out star horse Cornado NRW, but the troublesome Longines triple caught them out, as did the penultimate double of verticals - it would be a six rider jump-off.

First to return to the ring was Darragh Kenny (IRL), the Irish rider determined to stand on the top of podium this season, so close already this year but denied at the final moment. They set off at a pace, the pair galloping the seven strides to fences one to two. They jinked on the long gallop to the final Longines oxer, Kenny taking a pull to the last but flying clear to finish in 37.54s.

Keen to keep the LGCT Grand Prix of Chantilly title and secure his ticket to the LGCT Super Grand Prix at the GC Prague Playoffs, Nicola Philippaerts (BEL) and H&M Chilli Willi flew to the start. At the split time they were slightly slower, and despite a valiant effort down the final line they finished just shy of Kenny’s time, finishing in 38.13s.

Christophe Vanderhasselt (BEL) and Identity Vitseroel clearly opted for a steady final round, looking to finish their challenge today with another clear. They crossed the line in 39.80s, unable to contest for the win, but clearly delighted with their performance today.

Former winner here Gregory Wathelet (BEL) knew what it takes to win in Chantilly, and flew through the starting gates with his powerful grey stallion MJT Nevados S. But there was drama as they took a turn too tight into the pink and black oxer - the horse refusing at the final moment for 4 faults.

The expectant crowd burst into thunderous applause as the first of the French riders Kevin Staut (FRA) returned to the arena with Urhelia Lutterbach. The duo were down on the split time after the Longines double, but took a brave turn to the penultimate fence. A push down the galloping final line saw them back in touch, but it wasn’t enough - they finished in 38.38s and behind Nicola Philippaerts.

Final rider to go Penelope Leprevost (FRA) had all the pressure on her shoulders with Vancouver de Lanlore. They were slower at the split time and despite a valiant turn to the penultimate fence and a galloping chance at the final fence they could not beat Darragh Kenny’s time. They would finish in second, with Nicola Philippaerts taking third today.

The Tour now looks to Berlin for the 13th round of action, with the fight for the overall rankings at the forefront of the riders' minds in their quest for supremecy.