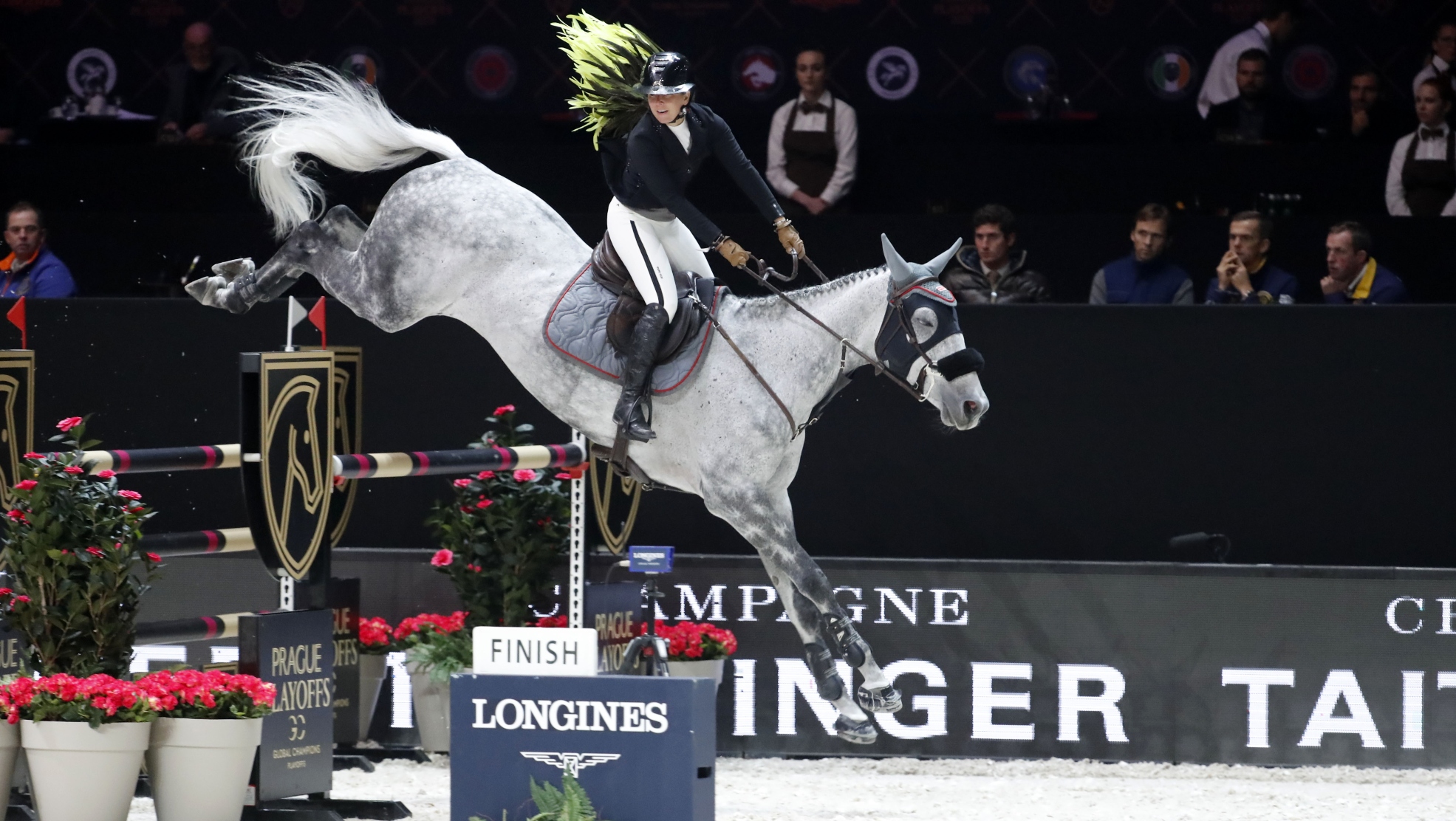 Dani G. Waldman (ISR) and her 10-year-old grey mare Jativia stole the show in a thrilling curtain raiser for the GC Prague Playoffs, throwing down the gauntlet to the rest of the field for the weekend ahead.

A delighted Dani said: “I don’t even know how that happened, we ended up two seconds faster than anyone else, but it’s great! It couldn’t be a better start and I’m thrilled to be here, and so far our plan is working. It’s one of the biggest purses in the whole sport so we’re here to play ball."

Uliano Vezzani’s first course of the weekend was a cruising, flowing challenge - the 1.45/1.50m class set against the clock. The track featured a brightly coloured double featuring historic Czech houses, another Czech Equestrian team double, a wide Longines oxer, a delicate BMW vertical with a water tray, a yellow Bohemia Energy oxer, and a life-like guard flanked vertical to catch the horses’ eye.

Pathfinder Jérome Guery (BEL) put in a strong round with Garfield de Tiji Des Templiers, the pair flying to the first clear of the weekend in 53.92s. He was quickly followed by a series of his Longines Global Champions Tour Super Grand Prix contenders, Marlon Zanotelli (BRA) with VDL Edgar M, Peder Fredricson (SWE) with H&M All In and Pieter Devos (BEL) with Jade vd Bisschop who all opted for quiet steady rounds, clearly saving themselves for the competitions ahead.

Another big contender this weekend was Maikel van der Vleuten (NED) who piloted a bouncing Verdi TN around the course, the 17 year old stallion bucking and skipping his way around the arena. One fence down put them out of the running today, but the experienced pair left the ring with smiles on their faces, ready for the challenges yet to come.

Abdel Saïd (EGY) soon rocketed to the top of the time sheets after a convincing round with Arpege du Ru, shaving milliseconds off Guery’s time to set the new time to beat at 53.77s. U25 rider Emily Moffitt (GBR) also pulled off a clear on Winning Good swiftly correcting the bay gelding after a wobble approaching an upright.

Dani G. Waldman (ISR) courageously left out a stride to the Longines oxer with her 10 year old grey mare Jativia, the duo clearly going for the win today and swiping an impressive two seconds off the leading time to take the lead in 51.99s.

There was early drama for Simon Delestre (FRA) with his 9 year old Qopilot Batilly Z, after the bay gelding put in a last minute stop at the GC oxer, slamming on the brakes to collect 4 faults. It would be a round to forget for the pair, finishing on 14 faults today.

Unusually the first fence fell for Harrie Smolders (NED) and Don VHP Z, but they completed the rest of the course tidily, setting for 5 faults in total in this afternoon’s opener.

The GCL Super Cup Quarter Final will kick off this evening at 20:00 with the Opening Ceremony, presenting the teams to the spectators, taking place at 18:05 local time. Tune in via GC TV (www.gcglobalchampions.com) to watch live.