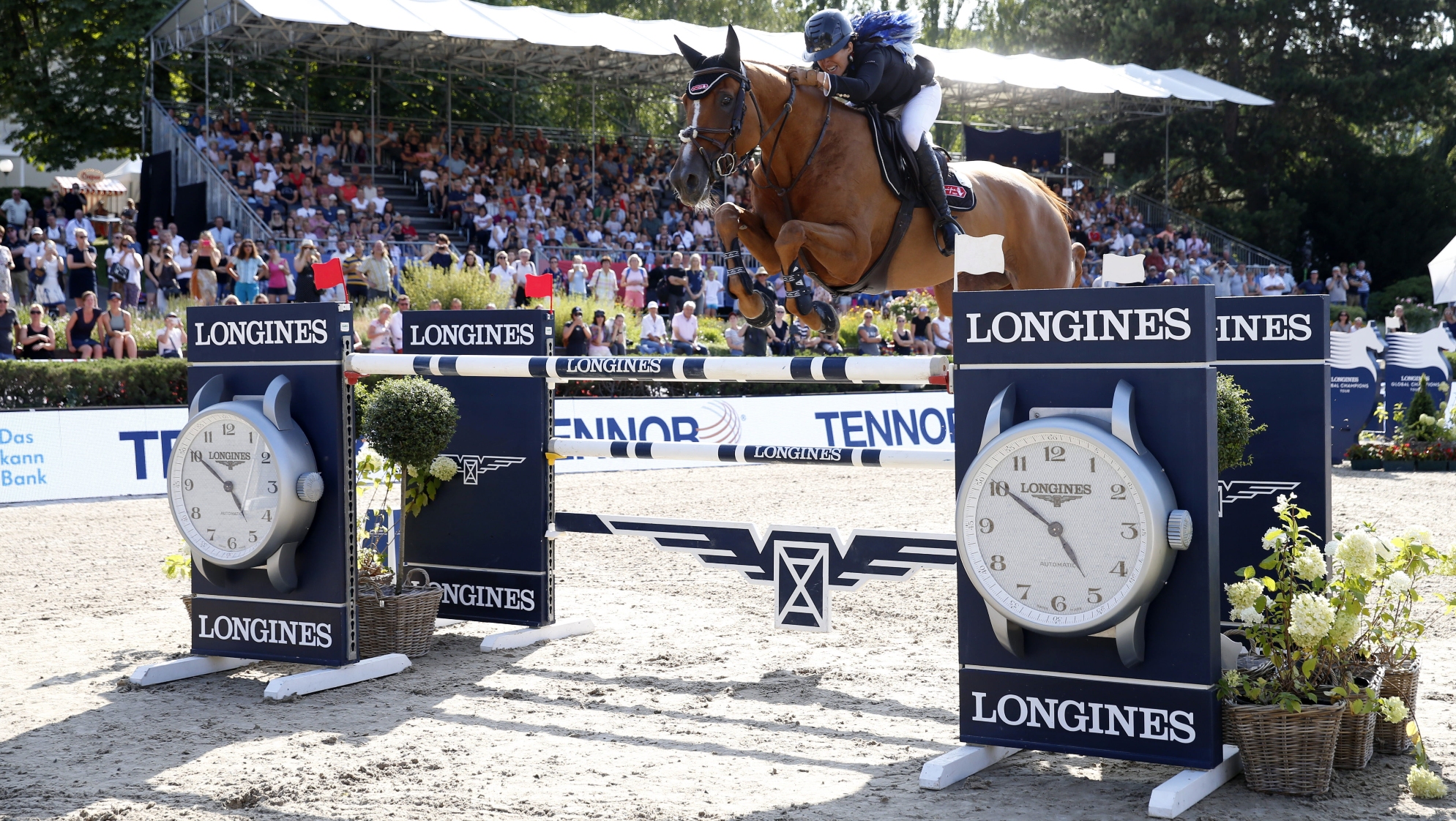 Dani G Waldman (ISR) and Lizziemary scooped their second LGCT Grand Prix win of 2019 in spectacular style in Berlin producing one of only two double clears on her “incredible” horse in the prestigious competition presented by Tennor.

With Dani already qualified for the LGCT Super Grand Prix at the GC Prague Playoffs in November the golden ticket went to a delighted Ludger Beerbaum (GER) who finished second in today’s big class on Cool Feeling to the delight of the home crowd. Dani admitted that her earlier win in Shanghai meant the pressure was off today to qualify for the GC Playoffs at Prague’s O2 Arena.

She was full of praise for her ultra-consistent chestnut mare, Lizziemary: “I like to think she’s one of the best in the world. She tries so hard and there isn’t a single day that she doesn’t lay it all out. The only time that I don’t do well is if I screw up, so as long as I do a good job she’s always there for me. It’s a privilege to ride her and she’s an amazing animal. Every time I go out there, she’s unbelievable.”

Ludger Beerbaum decided in the warm-up that he would go for a steady clear for second place and his ticket to Prague, but by the time he had walked down to the ring, he had changed his mind and decided to try to challenge Dani. He said: “If someone this morning would have said to me that I’d win the qualifier and come second in the grand prix then I would have signed straight away,” said Beerbaum. “The peak is qualification for Prague, and respect to Danielle as she really deserved to win today. But it’s like taking an old dog to the hunt again; you smell a bit of blood and you kind of get really excited and that’s how I feel.”

Jan Tops, Founder and President of Longines Global Champions Tour praised the course-building, saying: “I am very happy that all four riders here all qualified for the LGCT Super Grand Prix in November which is a very prestigious class. Pieter Devos is still in the lead of the ranking but everything is still possible to the end and that is what every top sport dreams of.The beauty of our circuit is that everything is still open on the rankings. We keep the tension and everything is still so exciting until as late as possible.”

Pieter Devos (BEL) has the LGCT ranking lead on 249 points and is 17 points ahead of Daniel Deusser (GER) with Ben Maher (GBR) in third on 224 points.

Volker Wulff, of Berlin Equestrian Events said: "Frank Rothenberger did a really good job again. It was really good to have that kind of sport we saw today and the crowd loved it very much.”

Six riders of the 33 starters managed to pull off clear rounds inside the time over Frank Rothenberger’s twisting, delicate and intriguing track in the Sommergarten in the German capital. The course of 13 obstacles, with 16 jumping efforts, saw problems evenly spread around the egg-shaped arena, with the skinny plank atop the first part of the double turning away from the in-gate causing the most faults and the curving lines necessitated by the arena’s oval shape prompting some inventive riding.

The first round claimed some high profile scalps, with poles falling generously, even for some seasoned combinations. A third of the field had already jumped before Harry Charles (GBR) produced the first clear inside the time. Bassem Mohammed (QAT) and Bart Bles (NED)  both cleared all the fences, but couldn’t make the time, so agonisingly missed out on the jump-off.

The course was a real five-star test, with some superb horses languishing well down the order, and three combinations, including Harrie Smolders (NED) with the mighty Don VHP Z N.O.P., retired.

Harry Charles (GBR) - who has qualified for the LGCT Grand Prix in every show he has ridden at this season - was the first to go. He and Borsato tried the brave inside six strides but lowered the black and white GC vertical and the last fence to finish on eight faults in 39.10 seconds.

Next in was home rider Christian Ahlmann (GER), a previous winner here back in 2017 and second last year. He and Take A Chance On Me Z started confidently, but clattered through the top rail of the double turning away from the in-gate, even though the lightweight plank had been replaced by a pole for the jump-off. They finished on four faults, but in a speedy time of 38.56 seconds.

Nicola Philippaerts (BEL) was hoping to challenge for the top step of the podium riding Katanga v.H Dingeshof. The neat and nimble horse’s quick feet helped him out with some of the tricky distances. But they came unstuck when the horse couldn’t quite reach the back rails of two of the oxers and landed on them both to finish on eight faults in 41.63 seconds, which put them behind Harry Charles.

Frank Schustert (NED) was looking for a podium place - and a ticket to the Playoffs as qualification time is running out - with Queensland E, but after climbing over the first part of the tricky double at 8b, the distance was just took great and they took down the second part to finish on four faults in 40.68, the slowest of the four-faulters.

Dani was the first to produce a clear round on the powerful and careful Cabri D’Elle daughter Lizziemary, with a tight roll-back, a heart-felt leap from the mare at the double and a proper gallop to the last fence. They clocked a time of 39.46 seconds.

It was all down to the last to jump, Ludger Beerbaum (GER). Cool Feeling answered every question asked of him, and was faster than Dani right up until the final metres of the course. But although all the jumps stayed up, Ludger broke the beam a third of a second slower than the eventual winner, in 39.81 seconds.

Another day of five-star action from Berlin on Sunday before the tour moves on to London for the 14th show of the season next weekend.