Countdown Is On As 2020 Calendar Revealed! 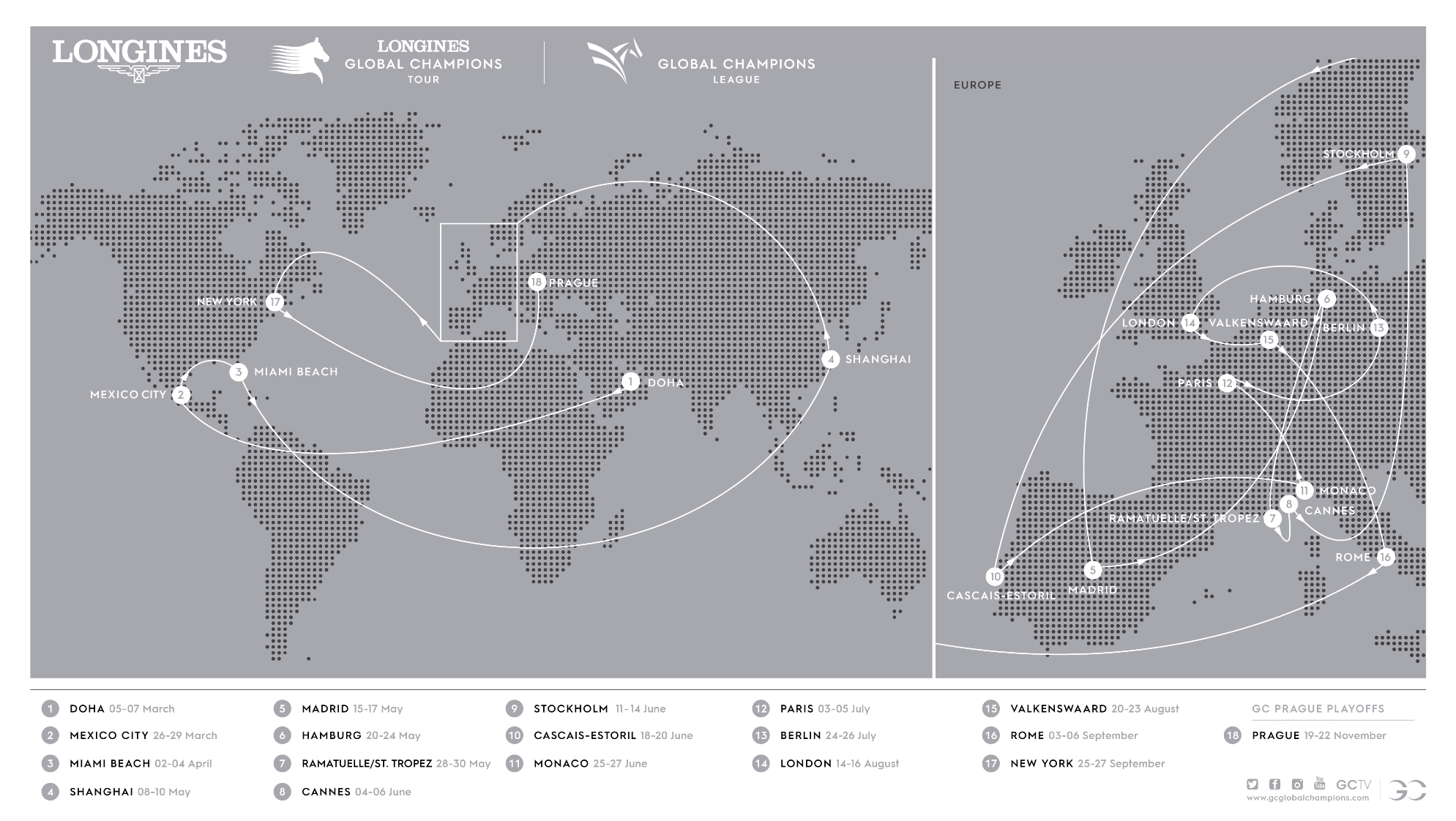 The countdown is on to the launch of the Longines Global Champions Tour and GCL 2020 season with the spectacular curtain raiser in Doha, Qatar, kicking off in under six weeks.

The LGCT and GCL global circuit has continued to take the sport of show jumping to new heights and once again fans worldwide will be able to enjoy thrilling competitions across a total of 18 events at the highest level building up to the Finals in New York and the Playoffs in Prague.

In 2020 the individual LGCT series and the GCL team championship races will again span continents from the Middle East to The Americas before moving to Asia and Europe cementing the circuit’s powerful global footprint.

The opening leg in 2020 will take place from 5 - 7 March at the stunning AL SHAQAB in Qatar's capital, Doha. The high profile first event at this world class equestrian facility will ensure an exciting kick off to the new LGCT and GCL season.

All season riders will be battling to secure their golden ticket for a coveted spot in the ultimate individual showdown, the Longines Global Champions Tour Super Grand Prix at the GC Prague Playoffs. And motivation will be high among team owners, managers and riders to deliver maximum performance to put them in a strong position for the high pressure knockout stages of the GCL Super Cup at the O2 Arena in Prague.

A new partnership with global investment holding company Tennor was announced earlier this month as part of plans to accelerate future expansion on the back of the growing popularity of show jumping.

Jan Tops, President of LGCT and GCL said: “We are delighted to announce our calendar for 2020 featuring some of the world’s greatest cities and iconic destinations. We are committed to growing our sport with our new partner Tennor and to attracting new audiences on digital and TV to show jumping. The competitiveness of teams and individual riders through the season will no doubt be as intense as ever in the race to the Finals and the Playoffs where record prize money will be on offer.”

Millions of fans followed the LGCT and GCL season in 2019 as sporting excellence reached new levels with the world’s best riders and horses guaranteed at every event. Fans watched live at the venues or on GCTV live streaming, as well as following all the excitement on social media. The series will aim to expand its audience further during 2020 focusing on digital and broadcast coverage including CNN and Eurosport, and other TV channels around the world.

During the regular season last year, Great Britain’s Ben Maher and Explosion W dominated the LGCT championship again and were pivotal to the second consecutive victory of the GCL team London Knights. At the GC Prague Playoffs Maher rounded off his dream season by winning the LGCT Super Grand Prix and Shanghai Swans came to the fore after a tough series of qualifying rounds to take the title in the final of the thrilling GCL Super Cup.

Title Partner and Official Timekeeper Longines will once again have a strong presence throughout the 2020 season continuing the long-term partnership.

Stay tuned for the new line up of teams for the 2020 GCL championship as fans across the world get ready for the start of another epic season. All the action, including the GCL R1 & R2 and the LGCT Grand Prix, will be streamed live on GCTV at every event.

The 2020 LGCT and GCL Calendar