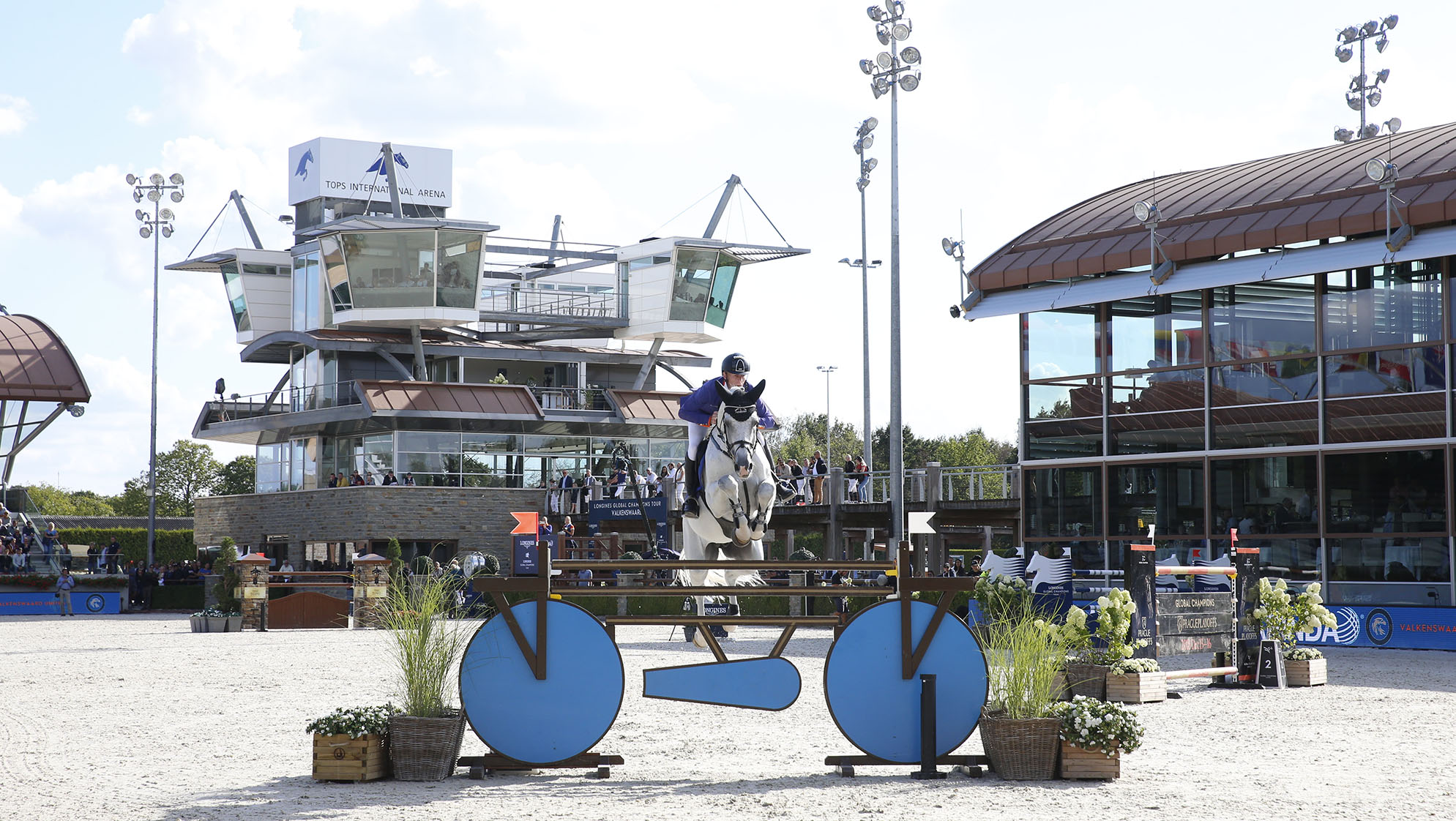 A dramatic first round of GCL Valkenswaard saw thrills and spills at Tops International Arena as the home team - Valkenswaard United’s Marcus Ehning and Alberto Zorzi - claimed the top spot and pole position for Saturday’s showdown.

Second ranked team United have their strongest chance of the season to close the gap to overall leaders London Knights, after they delivered a flawless double clear while the Knights scored their lowest result of the season so far. With every point counting in the race to the finals in Doha, and the GC Playoffs, United are hungry to convert their pole into a win on Saturday and boost their campaign to take back the overall Championship lead.

A total of five teams will kick off tomorrow with a score of zero, with the top three separated by just three tenths of a second on their combined scores - remarkable considering the large arena and very different types of horses used in today’s competition.

Speaking after their round, Marcus said: “So far we are in a good way, but we still have to take on tomorrow. I had a good round today and a super horse in Cornado.” Teammate Alberto agreed, “we are in good shape, but we are only half way in the competition. We will do our best!"

Uliano Vezzani made full use of the sweeping 125m by 85m sand arena, with the spectacular Tops International Arena venue celebrating it’s 25th anniversary this year. There was plenty for the horses to look at, a bicycle fence making an appearance as well as an eye-catching mini windmill, a scopey Longines oxer, and an open distance to a spooky looking liverpool set along the forest hedge-line. The vertical going into the combination caught out a few, and the final line  - a GC plank followed by a wide LGCT oxer - required pinpoint focus and precision right to the final stride.

First team to go Paris Panthers were the pathfinders for the teams to come. Four faults apiece from Yuri Mansur Guerios with Inferno and Jennifer Gates with Dolinn put the team on a score of eight, with a long wait to see where that would leave them ahead of Saturday’s showdown.

Bassem Hassan Mohammed of Doha Fursan Qatar trains at the Tops International Arena, the Qatari rider pulling out all the stops with Gunder to deliver the first clear. Teammate Michael Whitaker swiftly backed him up with El Wee Widge, jumping clear but picking up one heartbreaking time fault to keep the team on a score of one - only time would tell how costly that would prove to be. Speaking after his round a delighted Bassem said: “It’s an interesting course, like always from Uliano. It’s an amazing track, but very serious. There are many good horses and good riders here, so it’ll be interesting but I think we’ll see a few clears.”

Once again Valkenswaard United kept the pressure on overall leaders and closest rivals London Knights - anchor Marcus Ehning and Cornado NRW riding a fast tempo throughout the course to jump clear before passing the mantle to Alberto Zorzi and top horse Fair Light van't Heike. The epitome of grace under pressure, Alberto delivered a focused and flawless round, the team shooting up to the top of the leaderboard on home turf.

At the lower end of the rankings there is currently an intense battle for a place in the GC Playoffs, three teams dangerously close to missing out on a ticket to the GCL Super Cup where only 16 qualify. Cannes Stars currently take 15th position with their tally of 111 points, and know that a strong result today could boost their chances of moving up the rankings and away from the 17th place relegation zone. Just one point away on 110 sit Chantilly Pegasus in 16th, and New York Empire just two points behind in 17th and currently outside the qualification zone. Chantilly Pegasus took to the arena first, with Roger-Yves Bost and Carlos Lopez picking up just four faults - throwing the challenge to the Stars and New York Empire.

Cannes Stars pulled out top strikers Sergio Alvarez Moya and Karel Cox with top horses Carlo 273 and Dublin van Overis, and the pair delivered a double clear - putting them in the best chance possible to distance themselves from the drop zone.

There was disappointment for New York Empire after David Will collected eight faults with Forest Gump, before Scott Brash and Hello Shelby picked up another four to put the team on a score of 12, the Empire falling down the order and with everything to do in tomorrow’s competition.

Further drama ensued after St Tropez Pirates were eliminated when Edwina Tops-Alexander and Cinsey had a double refusal at the triple combination. This meant the team would not be able to take part in tomorrow’s competition, the team unable to collect valuable points in their ranking battle.

Nicola Philippaerts took centre stage for the overall leaders London Knights, this time mounted on H&M Harley vd Bisschop. But the grey gelding clipped the liverpool with the tip of his hoof, before the pair took an extra stride to the final fence, the grey hung in the air at the final oxer, and came down on the back rail putting the team on a score of eight. Teammate Martin Fuchs had all the pressure on his shoulders, knowing he would have to deliver a fast clear with Clooney to keep the team within touching distance of rivals United. But there was further dismay for the team as the first part of the combination came down, adding another four faults to put the team on an unusual score of 12 in total - their biggest score of the season so far.

So it would be Valkenswaard United who claim the lead on home turf, with five teams on a clean score, and a further 9 within a pole of those up front. The GCL Valkenswaard final will kick off at 14:30 local time, tune in LIVE via GC TV and on the official Facebook Page.