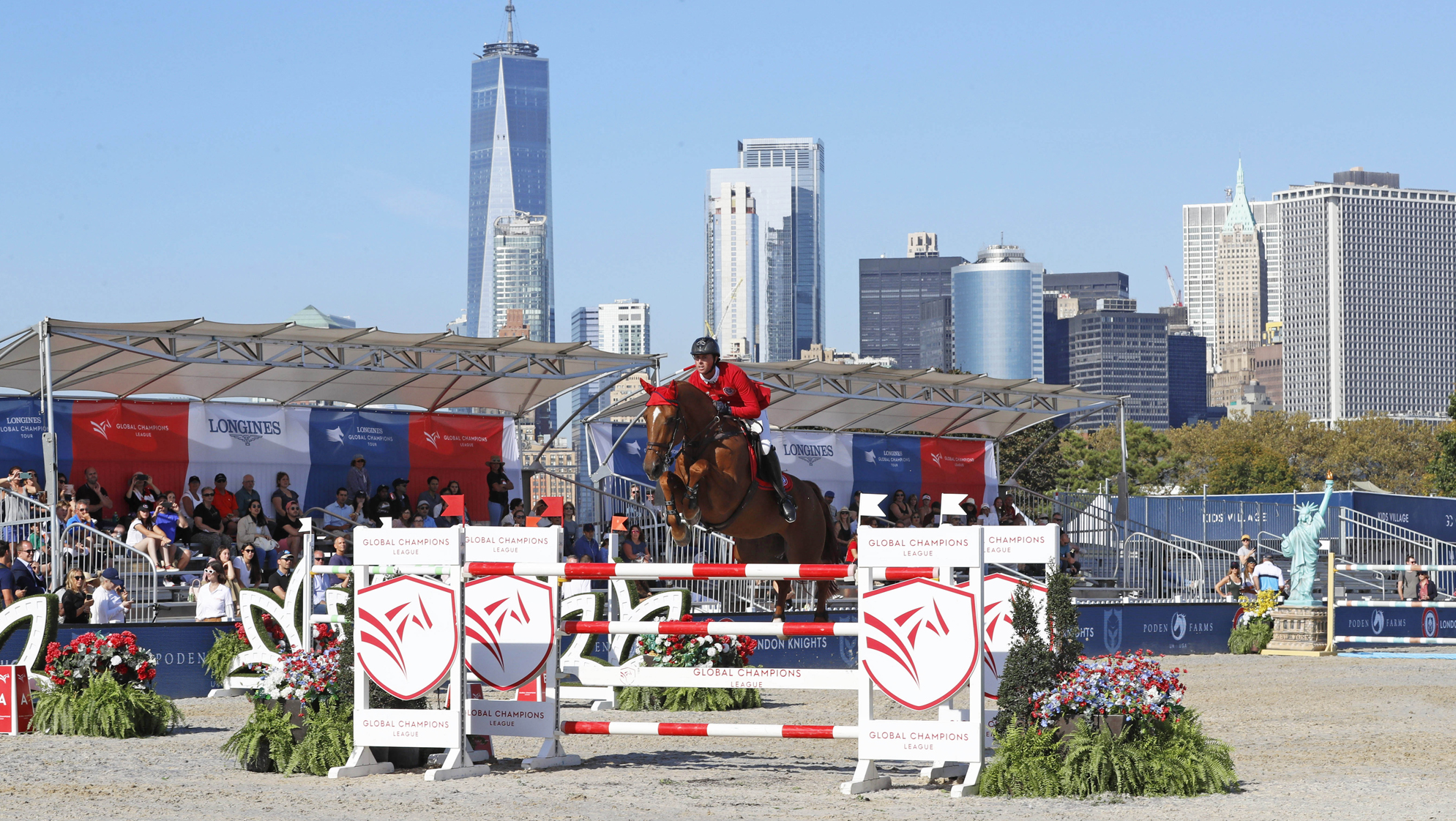 In a script worthy of the Broadway stage, today’s GCL New York R1 saw the London Knights claim pole position - propelling themselves back into the 2019 title fight as Saturday’s Championship decider rests on a knife edge.

London Knight’s formidable combination of Martin Fuchs with Clooney 51 and Ben Maher aboard Explosion W blew away the competition in a jaw-dropping class today, taking pole position and every advantage possible heading into Saturday’s showdown.

However, just one rail away after today’s results are the current ranking leaders St. Tropez Pirates, with Pieter Devos and Dani G. Waldman collecting just 4 faults in the complex class to put them within touching distance of a podium - and the Championship title - tomorrow.

In a drama-fuelled day, the Shanghai Swans - who were placed second in the overall rankings so far - were eliminated from the competition after Peder Fredricson and Zacramento unexpectedly parted ways during today’s first round of action. Their elimination would mean the team cannot improve on their score this weekend, dropping the Swans out of contention for the title.

Martin Fuchs spoke after their round: “It helped that we have two of the best horses in the world and are in great shape, so it’s a great start. My horse Clooney is in the best shape he’s ever been now.”

Teammate and team manager Ben Maher revealed the team’s tactics: "Martin and I sat down and we had a plan this week. We have our two best horses here, and it's the first time we’ve teamed them up together.”

But the experienced British Olympic gold medalist remained clear-headed: "One minute you can be winning, the next you can be out, and every score counts. We’ve come with one of the best teams possible this weekend to put pressure on the others, so we’ll hope to produce more clear rounds tomorrow."

With clear blue skies and picture-perfect weather, the first part of the conclusion to a roller-coaster GCL season kicked off in the spectacular city of New York. For the first time in history, Governors Island played host to the world’s best horses and riders, with spectators and VIPs enjoying unprecedented views of Manhattan’s downtown skyline and across the water to the Statue of Liberty.

Uliano Vezzani produced a cracker of a course, with the beautiful purpose-built fences showcasing many of New York’s greatest images. A Statue of Liberty and Empire State Building-flanked vertical caught the eye of many, and a NY silhouetted pair of verticals gave the horses plenty to look at. Vezzani’s 1.55m course was a test for the riders, with options on strides and careful decisions to be made on whether to take the inside, or outside turns. A light-to-touch GC plank would claim the most victims, as would a delicate green-and-white double set just off the in-gate.

London Knights
Third in the Championship and 8 points behind the leaders, St Tropez Pirates, the London Knights pulled out the big guns for this round of action. First in was Martin Fuchs with his top horse, the 13-year-old grey gelding Clooney 51. The pair flew round in perfect harmony, the talented stallion jumping his heart out for the young Swiss rider - clearly fresh and enthusiastic at they attacked the course. They delivered the clear, passing the baton to teammate Ben Maher and his top horse, Explosion W. With Martin watching on, Ben and Explosion threw down the gauntlet, delivering a second powerful clear to keep their Championship title hopes alive.

St Tropez Pirates
Current leaders, St. Tropez Pirates brought out Dani G. Waldman with her top mare, Lizziemary, and they set off with determination. But they drifted a little to the GC plank, just slicing the corner and the top rail fell - the team would drop to 4 faults. As teammate Edwina Tops-Alexander watched on from the kiss and cry, the Pirates sent in Pieter Devos who bought out his experienced gelding Espoir. Knowing another fence could cost them a chance of the title this season the pressure was truly on, but Pieter kept cool and brought home the clear. The team would be just 4 faults away from a podium tomorrow and in a fight that will see the Championship go down to the wire.

Doha Falcons
There was drama for the Falcons after Jur Vrieling and KM Chalcedon had a sticky moment at the gappy double of NY verticals, the Dutch rider having to circle back to attempt the combination again. They finished the rest of the round clear, but time faults after their stop would put the team onto 6 faults. Bronislav Chudyba brought out the aptly named New York, but two fences down - including the troublesome GC plank - put the Falcons on 14 so far.

Chantilly Pegasus
A steady and careful clear from Chantilly Pegasus’ mid-season transfer Francois Mathy Jr. and Uno de la Roque put the team in the mix. However an unlucky fence for U25 rider Constant van Paesschen and his chestnut stallion Verdi Treize would mean the Pegasus team would finish R1 on 4 faults.

Cannes Stars
Abdel Saïd was first to go for the Cannes Stars, piloting Etos HBC around the flowing track. But one unlucky pole cost them the chance of a clear today, with teammate Margie Goldstein-Engle next to go. The popular American rider took on the course with determination aboard the big striding Dicas, but another dropped pole would see the Stars fall to 8 faults overall.

Monaco Aces
Julien Epaillard’s round came undone at the GC Plank, the fence falling and unsettling his 10-year-old chestnut stallion Virtuose Champeix. The Statue of Liberty flanked vertical also came down, meaning the Aces would land 8 faults. U25 rider Jos Verlooy piloted his 14 year old stallion Caracas around the course, but as they pushed on to meet the time allowed the fences started to tumble - three falling and the team dropping to 20 faults.

Madrid in Motion
Michael G Duffy brought out his top horse Lapuccino 2, but the 11-year-old grey gelding kicked out at the blue water-tray lined oxer picking up 4 faults. The second part of the green and white double came down, the duo finishing their round on 8 faults. Teammate Maikel van der Vleuten knew he couldn’t afford a fence with Beauville Z, and the Dutch rider did everything possible to allow his 9-year-old horse the best chance of jumping clear. Despite a moment in the NY double, they delivered - keeping the team on 8 faults and in touch with a chance tomorrow.

Shanghai Swans
Second in the overall ranking coming into this weekend, the Shanghai Swans knew they needed to pull out all the stops today. First in was Daniel Deusser, the German rider taking the longer routes with Calisto Blue to ensure they had the best chance of a clear today. And their strategy paid off - the duo left all the poles up, passing the reins to teammate Peder Fredricson and Zacramento. The pair looked cool under the pressure, but as they approached the GC Plank the 14-year-old gelding put in a last-minute stop, unseating Peder as spectators gasped in shock. The fall would mean the Swans team were eliminated and unable to progress to Saturday’s second round - in essence their 2019 Championship hopes were over.

Valkenswaard United
Marcus Ehning brought out his experienced stallion Cornado NRW, the one-eyed horse absolutely flying around the arena as they took on the track. They produced the much-needed clear, passing the baton to teammate Alberto Zorzi and the slower-striding Cinsey. Alberto made the smoothest of turns around the arena, and the duo crossed the line clear - the dark stallion kicking out in excitement as they flew through the finish.

Paris Panthers
Darragh Kenny allowed Romeo 88 plenty of time to the fences, letting the horse travel around the arena but meeting each fence perfectly in their stride. With teammate and owner Jennifer Gates watching on from the kiss n’ cry the pair produced the clear, passing the pressure to Harrie Smolders and Cas 2. But the black and white oxer fell, 4 faults added to their score, as did the first part of the green and white double - the Panthers would finish on 8 today.

Berlin Eagles
U25 rider for Berlin Eagles Emil Hallundbaek piloted Chalisco, but the 12-year-old bay gelding just stuttered around the corner by the in-gate, having both parts of the green and white double down. Malin Baryard-Johnsson followed up with her top mare, H&M Indiana, the horse keen and enthusiastic to the fences. The Eagles would keep their score of 8 faults today.

Prague Lions
Marco Kutscher and Boeckmanns Lord Pezi Junior made a tight turn to the stone wall flanked double, the back rail of the oxer falling after they took it a touch too short. Marc Houtzager brought out his 11-year-old mare Sterrehof's Dante, and they looked to be opting for a steady approach. They survived a lucky rub at the green and white double, but the Statue of Liberty vertical came down - the Lions would finish on 8 today.

Miami Celtics
American star Jessica Springsteen brought back RMF Zecilie - her LGCT Grand Prix of St. Tropez winning horse. They elected for a steady, calm approach, the mare floating over the fences with ease. The duo produced a flawless clear, spectators cheering in delight. U25 teammate Harry Charles took over the reins with ABC Quantum Cruise, but they had a sticky moment at the blue oxer - the back rail falling. It started to unravel, the pair picking up 12 faults and dropping the Celtics out of the mix today.

Hamburg Giants
First to go for the Giants, Simon Delestre brought out his fiery grey gelding Filou Carlo Zimequest. The Frenchman dared the small horse to the fences, but it wasn’t to be after the first part of the green and white double fell, as did the delicate Longines vertical. U25 rider Titouan Schumacher piloted his 12 year old gelding Atome Z, taking the longer routes around the track. But they put in an extra stride to the Statue of Liberty vertical, another 4 faults added to the score and putting the Giants on 12 faults.

Scandinavian Vikings
Geir Gulliksen was the first to go for the Vikings, riding his top gelding VDL Groep Quatro. However there was dismay for the pair as the GC plank came down again, the duo finishing on a score of 4 faults. Leopold van Asten brought out his top mare VDL Groep Miss Untouchable and they too opted for the steadier strategy, taking every longer route available to give the horse space to jump clear. They pulled out all the stops, finishing clear and keeping the Vikings on 4 faults.

New York Empire
Home team New York Empire were the last to go, the squad bringing out GCL Valkenswaard winning combination of Daniel Bluman and Georgina Bloomberg. First up, Daniel rode top horse Ladriano Z, the scopey gelding leaving plenty of air above the fences. With teammate Scott Brash watching on, the pair delivered the clear - heaping the pressure onto the shoulders of Georgina Bloomberg and Quibelle. Groans rose after the third fence - a wide black and white oxer - fell, an unlucky touch just dropping the team to 4 faults. But the pair followed through with a foot-perfect performance; New York Empire would finish on 4 faults and within touching distance of a podium on Saturday.

The conclusion for GCL New York, and the 2019 season Championship, kicks off at 12:30 on Saturday local time. Tune in LIVE via GC TV (www.gcglobalchampions.com) and don't miss a minute.