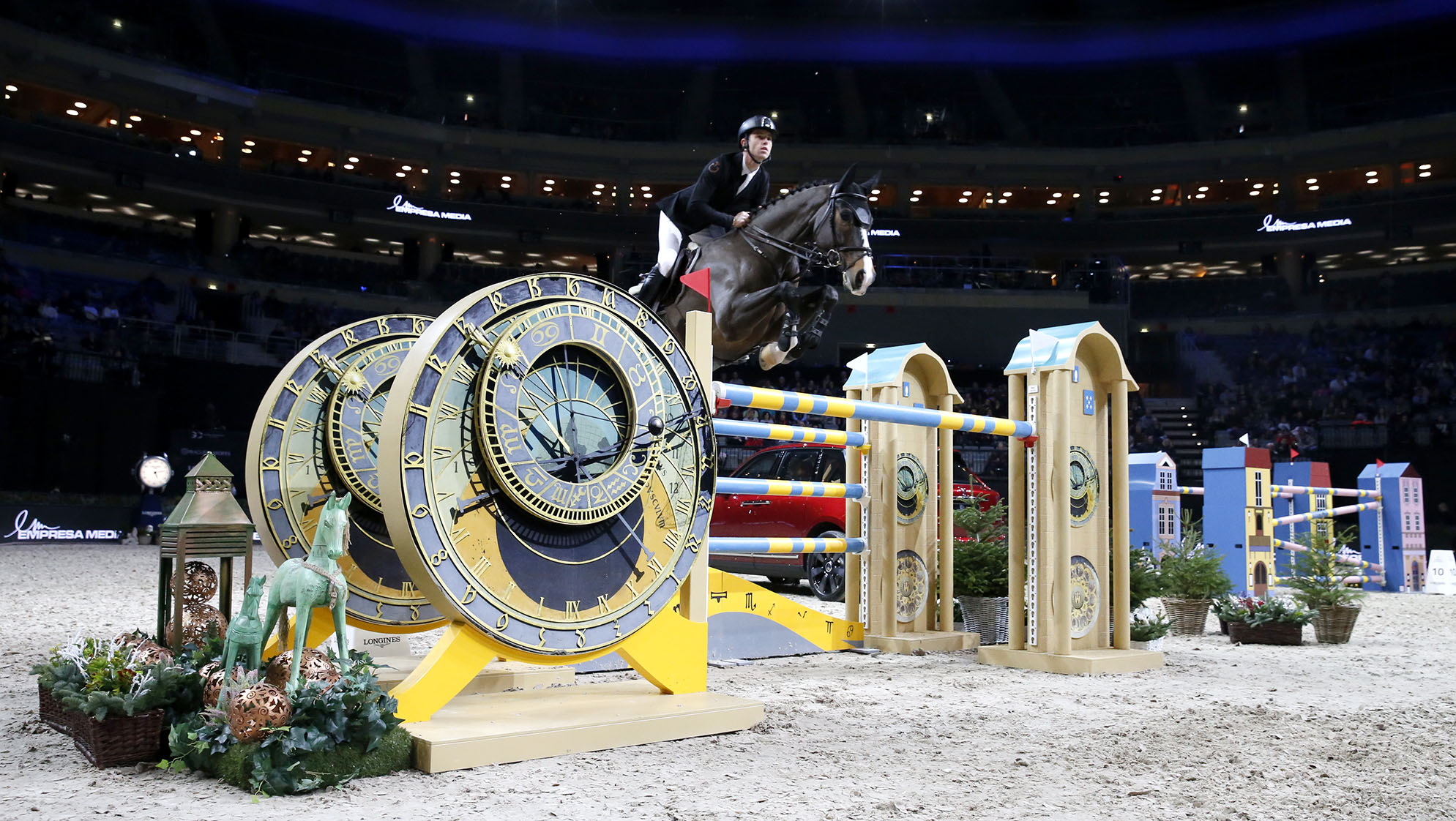 Scott Brash (GBR) and Hello Shelby effortlessly flew to the top of the leaderboad in this evening’s CSI5* speed class setting the winning pace of 56.36s. Hot on their heels was fellow compatriot Ben Maher (GBR) alongside Winning Good crossing the line in 57.14s, and only 0.52s behind Ben, David Will (GER) and Forest Gump took our third place.

31 international starters took to the arena’s 14 architecturally placed fences for the second speed class of the GC Prague Playoffs. No turn was spared as riders, now familiar with the O2 Arena, tested Uliano Vezzani’s course to its limits.

First rider to go Scott Brash (GBR) was the pathfinder for the field, piloting Hello Mr President around the arena in 67.99s to set the time to beat.

Marlon Zanotelli (BRA) and VDL Edgar M scorched around the track, blindingly quick in the turns. But a fence fell, knocking them out of the running. Zanotelli will now focus on tonight’s class, the GCL Super Cup Semi Final: ‘’I’m looking forward to tonight, yesterday was a really exciting class and Uliano did a fantastic job. It’s unbelievably exciting – with the new format, having three riders with all score counting adds all the tension.’’

Speed demon Simon Delestre (FRA) soon took over the lead with the dark bay Chadino, setting the time alight in 59.31s, throwing down the guantlet to the rest of the field to come.

Harrie Smolders (NED) and Zinius were keen for redemption after their refusal yesterday, however the first fence fell ruling them out of the chance for the win.

With her phoenix-feathers flying, Danielle Goldstein and Cooler Than Me tackled the tight course, with the crowd cheering their approval as they crossed the line. The pair got quicker and quicker as the course went on, but couldn’t better Delestre’s time.

The Longines plank fell for Sameh El Dahan with Electric Z, and the penultimate fence despite a valiant effort of 58.45s.

But there was redemption for David Will (GER) tonight with Forest Gump, after their double refusal yesterday meant their team, New York Empire, was eliminated. The duo flew around the sand arena with clear agility, stopping the clock in 57.66 to take the lead.

‘’Forest redeemed himself today, even though I still very bad for the team that we had a bad performance. He caught me by surprise, it’s not happened before so I didn’t expect it. But today it’s always good to still be in the lead after Julien is behind you!’’

But it was Scott and his second mount Hello Shelby who took over the lead. The pair, last to go, shaved milliseconds off corners and blazed around the arena with clear focus to take the win, just moments ahead of Olympic Gold Medal teammate Ben Maher (GBR).