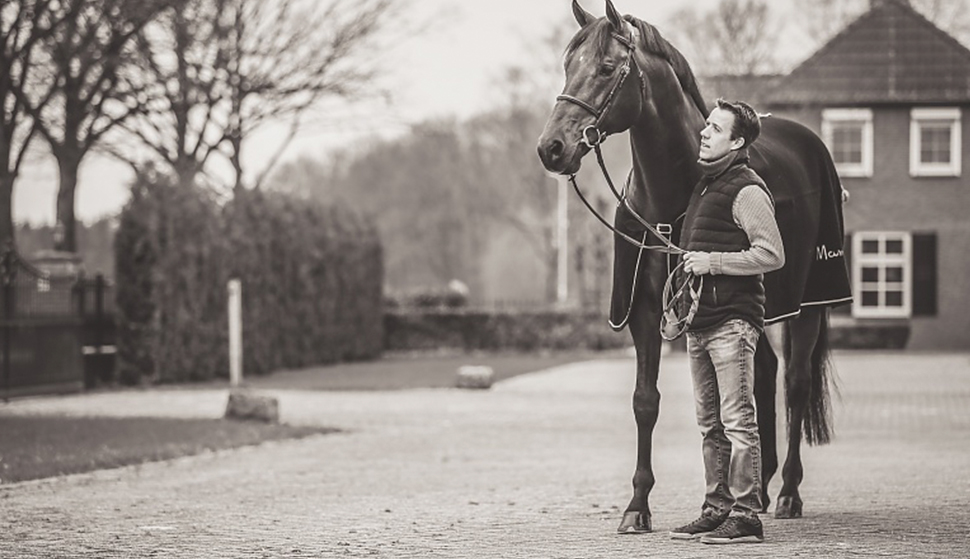 He’s 1,72m high, full of a special kind of horsepower and can rival Usain Bolt with his own celebration after finishing a round… Dutch Olympic rider Maikel van der Vleuten’s Verdi is undoubtably one of the most consistent stallions on the Longines Global Champions Tour and GCL circuit, with the 16  year old horse a prominent figure in the sport he’s competed in for over 12 years. We caught up with the show jumping superstar at his home in The Netherlands, where Maikel gives us an exclusive insight into the secret life of the very vibrant Verdi.

Verdi likes to take the mornings slow… "He starts off with a gentle stretch. 30 mins on the walker [almost like a treadmill for horses] first thing is enough to wake his body up."

But he gets his heart rate going at least once a day… “Depending on his competition schedule it might be we ride out into the forest, or work on some fitness training on the canter tracks or a gentle lunging session."

If the weather is good Verdi gets turned out in the field at the end of the day like every normal horse... "If the weather isn’t good, the grooms hand walk him around the yard for a nibble on grass."

Maikel believes careful management is key to Verdi’s success. “I know what I need to work on with him. We have a plan and a routine that has developed over the years. We know each other inside out."

Verdi is a yoga kind of guy… “I never do big jumping at home - he knows what to do already! Instead I focus on gymnastics with him to keep his body loose. It’s important that his body stays athletic - he’s very supple naturally and it’s important to keep it in top condition."

But it all starts and ends with the mind… “What’s most important is to keep him clear in his mind, and happy. So that’s why we often go for walks in the woods after a show, or take time to graze him in-hand.”

It’s taken years of practice… “We grew up with this routine together, since he was four years old and I was 17. It helps that he has an athletic body, but it’s my job to help him stay that way and keep him happy.”

Maikel reckons if Verdi was a human, he’d be the David Beckham of the horse world… “He’s very honest. He’s quiet but very focused... Good looking! He’s an easy person who likes to work, loves his sport and loves his job.”

But he’s also a master of getting it just right… “Under saddle he knows what he has to do - he’s never a horse who is aggressive or wild, he saves his energy for the show ring. I’ve been in all different kinds of situations with him; sand, grass, rain, sun... And he’s always consistent which is what makes him very special.”

He likes to communicate… “It’s funny, when I give him an easy day on the lunge and he thinks he’s finished, he’ll always give a small whinny at me as I walk to him. I do ten minutes on the left rein, ten minutes on the right and then I walk over to pat him and he always gives a nicker, as if to say “Great, I’m done!”… Every time. It’s as though he’s talking to me.”

Verdi might be gentle but he likes to think he’s in control… “I have to let him think everything is his idea. He’s quiet but if I ask too much of him for things that are not needed, he can get mad. He’s very clever, you never need to over-ask him.”

He eats like the absolute athlete he is… “Verdi has three meals a day. In the morning, afternoon and evening he gets 'Red Mills Horse Care 14' - a combined mix of an oat based formula, antioxidants and pro balance vitamins and minerals. He also gets hay of course. I try to keep it simple and very easy.”

He’s become famous in the equestrian world for his celebratory leap and buck at the end of each round - his own signature celebration display a la Usain Bolt or Mo Farah… “It’s become his “thing”, to leap once the round is over. It’s always after the last jump. It’s nice that he does it because he know he’s finished, he can feel it, but he has to be careful he doesn’t kick the fence out!”

He’s the epitome of a perfect LGCT and GCL competition horse… “If you want to be in the top three in the Championship -  which is very, very tough, because it's always the best riders and best horses - you have to be able to compete at all the different types of arenas on the circuit, and it’s the same for your horse. Verdi is a top horse because he’s so consistent. I can bring him everywhere, and he's brilliant. This year the LGCT and GCL title will be our focus.”