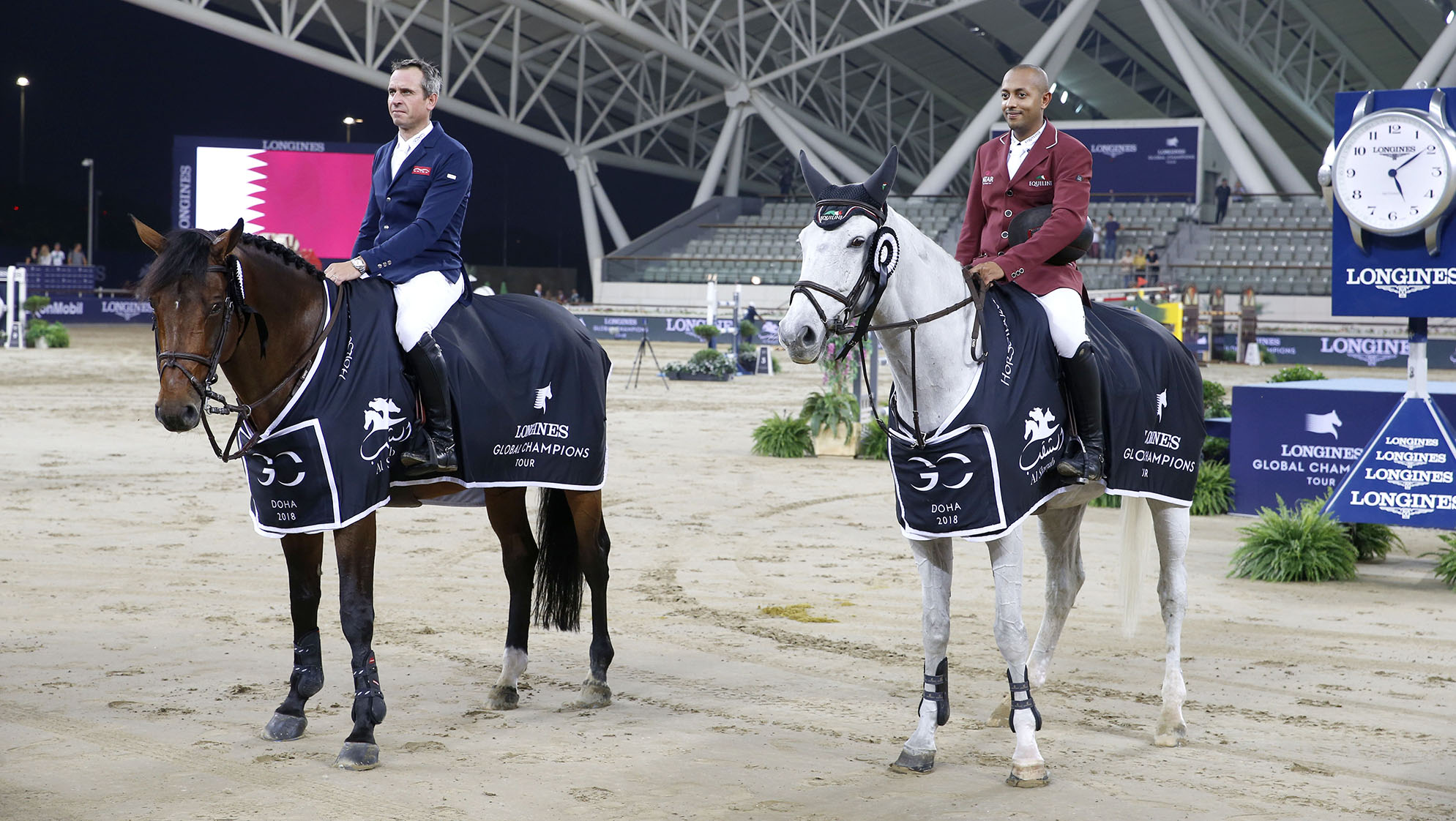 In a remarkable first class of the Longines Global Champions Tour of Doha, home hero Bassem Hassan Mohammed (QAT) and Julien Epaillard (FRA) matched the top time of the class finishing in 24.85 seconds.

Bassem spoke after his joint win: “It’s very nice to start the weekend with the win. I know Julien is fast and I saw him before I went in. I tried my best and ended up with the win.”

Set in the magnificent AL SHAQAB arena, the world’s top riders were evenly placed throughout the draw in the first class of the weekend, and were holding no punches in the speed class. Whilst walking the course, Ben Maher observed the tight line from fence 10 to fence 11: “I definitely think everyone will try to come inside this jump (fence 5) to this one (fence 11).” This was certainly the case for 90 per cent of today’s riders.

Marc Houtzager (NED) on board Sterrehof’s Baccarat took an early lead with a handsome time of 30.33 seconds only to be beaten three riders later by Ben Maher (GBR) and Madame X whose time of 26.22 seconds was challenged by Lorenzo de Luca (ITA) and Jeunesse van T Paradijs. Unfortunately it wasn’t Lorenzo’s day because taking one stride out to the last fence cost him a rail despite a record time of 24.62 seconds.

The second half brought most of the action as riders gleaned from their fellow rider’s performances. There was drama at fence 11 for Great Britian’s Emily Moffitt. Known for their class and speed, Don Vito decided today wasn’t the day leaving Emily to graciously exit the arena on two feet.

Geir Gulliksen (NOR), the 40th rider to enter the ring, knocked Ben back to second place by setting a snappy time of 25.45 seconds on VDL Groep Quatro. Geir would soon be beaten by French speed demon Julien Epaillard and Safari d Auge who edged infront by successfully completing the last line in 8 strides  passing the finish line at 24.85 seconds.

Astonishingly, two riders later, Bassem Mohammed (QAT) and Argelith Squid levelled the field by equalling Julien’s time, a rare occurance at this level of the sport. Second last to go was Bertram Allen and GK Casper, who perfected his second round of the day and slotted into third place with a time of 25.16 seconds.

The next class, the GCL Doha will kick off at 17:45 local time, with the high stakes battle for the Championship taking centre stage.