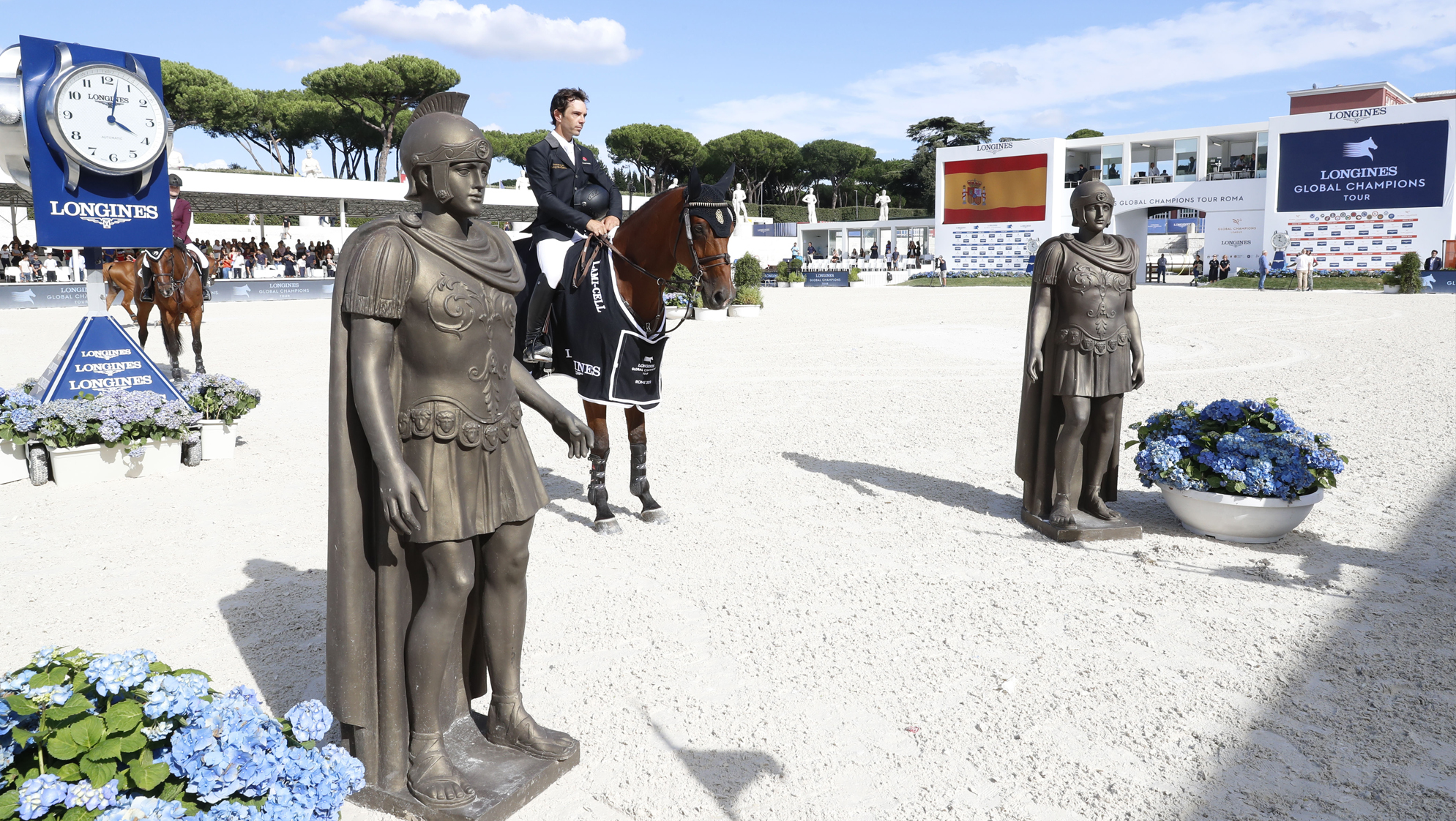 In a flat-out race to the last, Eduardo Álvarez Aznar (ESP) took the closing victory of the Longines Global Champions Tour of Rome aboard his trusted horse Rokfeller de Pleville Bois Margot.

With a grandstand finish, the Spanish rider was last to go in an electric jump-off which had the crowd on the edge of their seats. Aznar took the win despite a valiant attempt by Mark McAuley (IRL) piloting Valentino Tuiliere, who in turn finished just milliseconds ahead of yesterday’s LGCT Grand Prix of Rome winner Ben Maher (GBR) and F One USA.

A smiling Aznar said: “It’s been a fantastic weekend, not just in the results but this venue is fantastic - the atmosphere and the place, it’s a dream to be jumping here.”

Uliano Vezzani’s course was a technical challenge, the designer playing with the distances to give riders options and plenty to think about. A formidable triple combination claimed a few victims, the distance in the middle a little short, and the final line - set down the bustling grandstand - was a wide oxer with a galloping four strides to a delicate, gappy vertical.

Fans once again packed the grandstand to catch a last glimpse of their show jumping heroes in action at the Stadio dei Marmi, as 41 international starters took their chances at the 93,000 euro prize purse.

First round
First to leave all the poles up was U25 talent Emily Moffitt (GBR), the young rider piloting the 12 year old Tipsy du Terral beautifully around the track to take a convincing clear. Simone Blum (GER) brought out DSP Cool Hill, the lovely dapple grey gelding producing a calm and collected round. They finished a touch over the time allowed of 76s, one costly time fault ruling them out of a chance of a win today.

There was disappointment for the Italian fans after home hero Alberto Zorzi (ITA) and Vauban du Trio had the red and white combination down, the crowd groaning as the pole hit the sand. His compatriot Emanuele Gaudiano (ITA) and Carlotta agonisingly had the first fence down, much to the dismay of his fans, ruling himself out of a chance of a home win in Rome.

Gerco Schroder (NED) and Glock's Cognac Champblanc had an unusual stop at the gappy Colosseum silhouetted vertical - a miscommunication dropping them out of a chance of a win today. Pieter Devos (BEL) also elected to retire with Jade vd Bisschop after they picked up 8 faults, as did Marcus Ehning (GER) with his mare Cristy.

There were plenty of hard luck stories today, as faults fell all around the course. Jessica Springsteen (USA), Alexandra Thornton (GBR) and Simon Delestre (FRA) all dropped just one unlucky pole, and there was heartache for Michael Whitaker (GBR) and his 9 year old mare For Fun as the final fence fell to the groan of the crowd. The same happened for Abdel Saïd (EGY) with Arpege du Ru - proving that absolute control must be kept to the final moment.

Jump-Off
Vezzani’s final jump-off track of the weekend featured long galloping distances and two tight roll backs allowing the most agile of horses to make up time. First to return to the ring came Emily Moffitt (GBR), the young British rider galloping in with determination aboard Tipsy du Terral. Moffitt made a good turn back to the Longines vertical, and again to the GC plank before the pair flew down the final line, soaring over the oxer to finish clear in 41.92s.

Ben Maher (GBR) and F One USA were a touch slower at the midway point but managed to take a stride out after the Longines plank. Another good turn to the GC plank made up time, and they galloped to the last fence taking 11 strides to the final oxer. They shaved time off, setting a new time to beat of 40.36s.

Christian Kukuk (GER) gave his young 8 year old horse Creature a smooth round, but the German didn’t push the up-and-coming grey gelding too hard. They delivered a beautiful clear, finishing in 42.91s and behind Moffitt.

Australian rider Amy Graham (AUS) piloted Coleraine des Bergeries around the course, the horse a naturally slower mover across the ground. They kept the pace forward but the final fence fell, dropping them out of a chance of being placed in the top three today.

Mark McAuley (IRL) and Valentino Tuiliere started off quietly, but made a phenomenal turn on both roll backs. Their momentum built throughout the course, and this made all the difference as they flew to the finish, just pipping Maher to the lead in a time of 40.08s.

The pressure was on for Hans-Dieter Dreher (GER) and Prinz, but it tripped them up with the duo finishing on an unusual 10 faults.

All eyes were on Denis Lynch (IRL) with his new ride Rubens LS la Silla. While the chestnut was not the fastest across the ground, Lynch made a stunning turn back to the GC plank and flew to the final oxer on the forward stride. They finished clear in 42.35s, the combination clearly ones to watch for the future.

Final rider to go Eduardo Alvarez Aznar (ESP) and Rokfeller de Pleville Bois Margot looked to have a clear strategy for their jump-off round, the Spanish rider executing every stride, turn and jump to perfection. A stride out at the GC plank with Aznar landing on Rokfeller’s shoulders to push on for the gallop to the last would make the difference. It would be a class act from Aznar and his top - and most loved - horse Rokfeller, as they shaved milliseconds off the McAuley’s time to take the win in 39.71s.

The Championship now looks to St Tropez, Ramatuelle, for the 17th round of action in the 2019 season, kicking off next Thursday 12th September.