Ahlmann Triumphs Ahead of Super Saturday 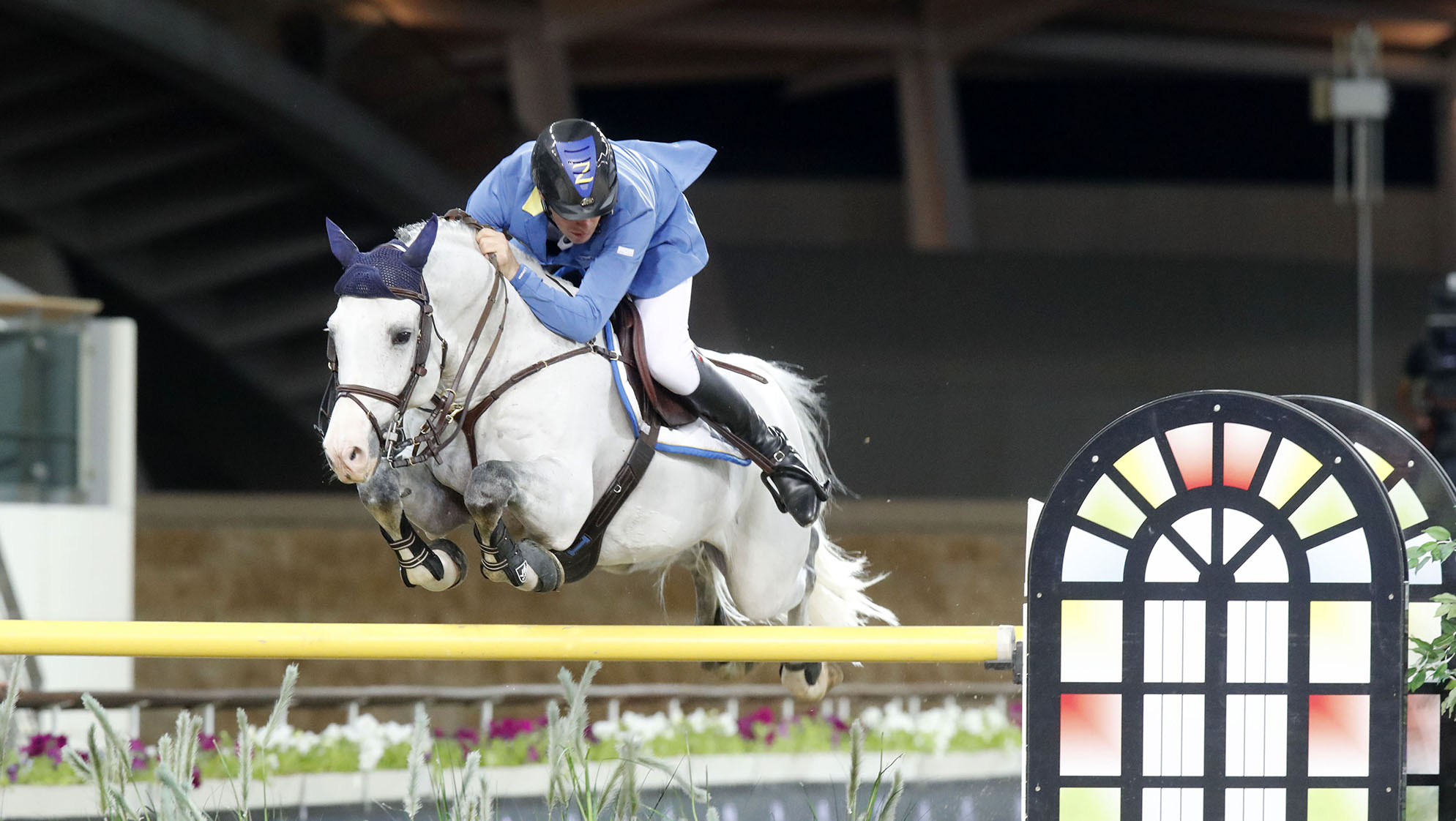 Christian Ahlmann and Caribis Z triumphed in a star-studded jump off in Doha tonight setting hearts racing ahead of the LGCT Grand Prix and GCL finals on Super Saturday.

With huge anticipation building for tomorrow’s blockbuster, fans were treated to a mouth-watering curtain raiser from a world class line up of 16 combinations in tonight’s jump off in the 1.55m class at AL SHAQAB.

It was a chance to see who was on top form as final decisions are made on which horses to field in tomorrow’s final LGCT Grand Prix and GCL of the season, before the premier of next month’s first-ever GC Playoffs in Prague.

Spectacular images of the soaring architecture of AL SHAQAB and the skyline of Doha City beyond ensured viewers around the world were witnessing another incredible stage for top-level show jumping. Uliano Vezzani’s course had its fair share of difficult distances and deceptive obstacles. The red and white Exxon Mobil vertical crushed the chances of several combinations including Edwina Tops-Alexander and Inca Boy who delivered an otherwise superb round. Delicate verticals outfoxed other riders including Jos Verlooy, Maikel van der Vleuten, while Nicola Philippaerts on J’Adore came unstuck at the penultimate fence.

Gregory Wathelet and Qualido 3 delivered the first clear round in impressive fashion and a jump off was guaranteed as Christian Ahlmann and Caribis Z turned in a beautifully balanced clear. A stellar cast joined them for the jump off including Harrie Smolders and Emerald, Pieter Devos and Claire Z, Scott Brash on Hello Senator, Marucs Ehning riding Mill Creek Filippa K and Laura Kraut on Deauville.

After their successful rounds Smolders and Kraut both predicted “a fast jump off” and so it was to be a cracking display of speed, precision and split-second times. As riders limbered up there were bustling scenes on the edge of the arena as families enjoyed the balmy summer evening at AL SHAQAB.

Wathelet and his bay gelding were super quick from the start, but they were the first to fall victim to the troublesome black and white GC vertical.

Ahlmann duly took note and went out all guns blazing to pull off a powerful clear round on Caribis Z in 45.06 forcing the following combinations to make mistakes if they were to have any chance to beat him.

Michael Whitaker, Marlon Manolo Zanotelli and Peder Fredricson were all casualties of the GC vertical and Ben Maher, who will be crowned 2018 LGCT Champion of Champions tomorrow, suffered an unusual 8 faults on Madame X.

Pieter Devos riding Claire Z put in a tremendous effort but finished 5th in 45.82. Karel Cox and Dublin van Overs gave it their all just beating Devos to stop the clock in 45.81 to take 4th place. Amazingly Shane Sweetnam riding Main Road flew round the course and went clear to finish in 45.80 for third - all three riders within a fraction of a second apart.

Last year’s LGCT Champion and current World No1 Harrie Smolders and Emerald hit the accelerator with incredibly tight turns and taking a stride out at the penultimate fence to finish in 45.61. There were valiant efforts from Laura Kraut, Jessica Springsteen and Scott Brash but all ended in faults.

Ahlmann had triumphed and said: “I didn't expect to win to be honest, with the line up behind me. But I believe I won it at the last and my horse was super today. Tomorrow is the LGCT Grand Prix and the GCL Final so I'm hoping for another good result."

Now the focus turns to the GCL Final at 14:30 local time, followed by the LGCT Grand Prix of Doha at 17:45 all streamed live on GCTV.