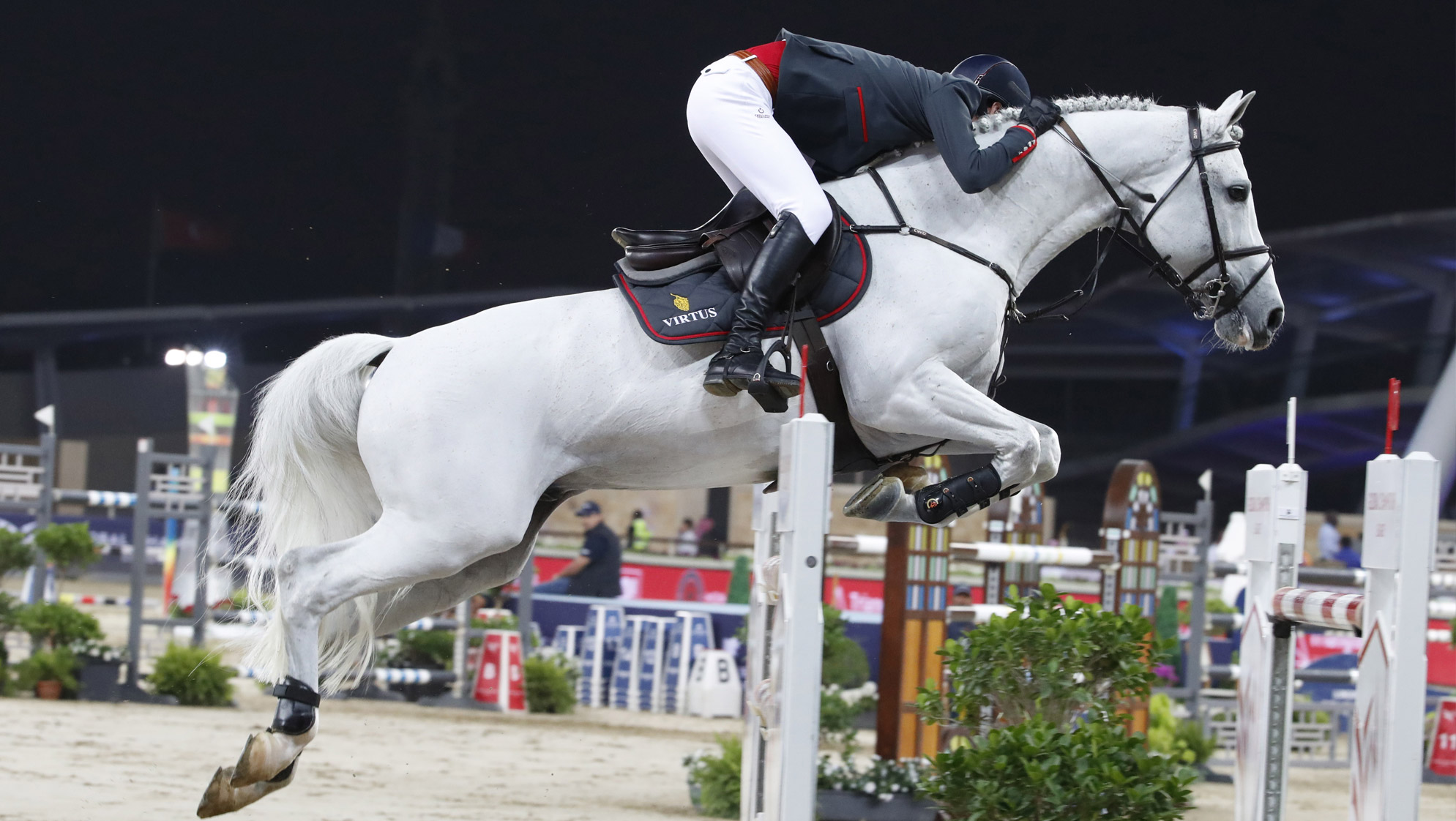 Monaco Aces kicked off their 2019 GCL campaign in determined style combining speed and pinpoint accuracy to take the lead going into Saturday’s showdown.

New signings Marlon Zanotelli and Jos Verlooy teamed up for the first time for the Aces in Qatar, and the team's strategy paid off. A delighted Jos said: "I think we had a very good plan. I am happy to have Marlon next to me - if I need something or help he is always there, so it is great to team up with Marlon."

Ten out of the 16 teams jumped double clears with motivation running high among team riders, owners and managers from Day One of the GCL team championship at the opening event at AL SHAQAB in Doha.

This season’s teams are packed with more strength and depth than ever after a busy off-season. Teams have been beefing up their firepower with rider transfers and new riders and horsepower coming into the GCL teams for the first time.

The Aces duo of Jos Verlooy and Marlon Monolo Zanotelli, teaming up for the first time after transferring from other teams, were almost three seconds faster than Hamburg Giants in second position.

It was clear from the start that the influential first leg was being tackled with deadly determination. The high calibre combinations in GCL Round 1 delivered steady clear rounds, piling pressure on the later teams to jump clear and faster to stand a chance.

Every fence made a difference and there was no room for error in a sign of how tough the new season will be. In the easy to follow format each team has six riders and the two selected for the team compete one after the other, meaning the team score is immediately clear and the tension never lets up.

Valkenswaard United
Bertram Allen and Harley vd Bisschop navigated the expansive course in steady style with the young Irishman keeping his horse in check for an accurate clear.

Frank Schuttert, making his debut in GCL and riding the scopy Chianti’s Champion, put in a smooth round powering the team to a double clear in a combined time of 170.58.

Bertram said: ”My horse jumped well, it’s a nice class - a nice opener. Harley will be my main horse this year. We needed to set the marker today. It’s a good start but it’s a long season.” The team finished in 7th place with the faster results that followed.

Ludger set off round Uliano Vezzani’s sweeping course in AL SHAQAB’S 120m x 80m sand arena beneath soaring architecture. The maestro and his gelding Cool Feeling kept it cool and went clear but their pace left them in 12th position.

Doha Falcons
The Falcons benefitted quickly from their new signing Jur Vrieling, a significant new recruit to the team and delivering a debut clear with VDL Glasgow.

Bassem Hassan Mohammed on Gunder, riding in his team’s home city, looked on form but went deep to the GCL Liverpool and had the front rail down for 4 faults knocking the team down the order.

Shanghai Swans
The Swans looks serious from the word go with Daniel Deusser and Callisto Blue going fast and clear. Pius Schwizer showed his experience and piloted Cortney Cox to a follow up clear propelling them into third position in a combined time of 164.94.

Daniel said: “It’s important to understand each other well within the team. It was a good start which is also necessary if you followed the last couple of seasons as it was very tight.”

St Tropez Pirates
Edwina Tops-Alexander with California and teammate Pieter Devos riding Claire Z were on strong form and polished off two clear rounds in a total time of 169.87 putting them in 6th position.

Edwina spoke of the importance of the first round of the first leg of 2019: “It is super important and from the beginning Day 1 counts a lot as we saw in the last year before. The plan was to jump double clear - we were not planning on going fast, just to finish on a good result and to put ourselves in a nice position for Saturday.”

Prague Lions
The Lions did not have the start they planned for with a total of 8 faults after Niels Bruynseels and Delux van T & L clipped the back rail of the GC upright and new GCL team rider Wilm Vermeir, riding Iq van het Steertje, also clocked up four faults putting the team at the bottom of the pack.

Miami Celtics
The U25s pairing for the Miami Celtics campaign delivered in style as the youngsters were given a chance to shine on the world stage.

Harry Charles on ABC Quantum Cruise and Michael Duffy with Quintano both pulled off impressive clear rounds to the delight of the team entourage watching from the touchline.

Michael said: “It’s incredible to compete on this level (in the GCL). The opportunity to get here and showcase ourselves is life changing.”

Cannes Stars
There was disappointment for Jane Richard Philips, riding Foica van den Bisschop, as they clocked up 8 faults at the final part of triple combination and at the Longines upright.
Karel Cox’s superb fast clear round on Dublin van Overis could not salvage their position in a strong field of finishers.

Hamburg Giants
The team have five new faces bringing a fresh injection of horsepower and rider experience. New rider Simon Delestre, a big name transfer in the off season from Monaco Aces, set off at a blistering pace on Chesall Zimequest and stayed clear.

Madrid In Motion
The winners of the first-ever GCL Super Cup Final in the debut GC Prague Playoffs last December kept themselves in contention with business like double clear rounds from Maikel van der Vleuten on Idi Utopia and Michael G Duffy on Lapuccino.

Chantilly Pegasus
Roger-Yves Bost delivered the clear round the team needed on Vino d’Espinet but teammate Carlos Lopez and Admara came home in 4 faults pushing the team down into 11th place.

Monaco Aces
After a big shake up over the winter off season the team now boasts new headline names including Laura Kraut.

It was the new young guns Jos Verlooy and  Marlon Modolo Zanotelli that threw down the gauntlet to the other teams in the opening leg R1 with the fastest double clear in a combined time of 160.43.

London Knights
The defending Champions of the 2018 GCL season were under the spotlight with high expectations. After a dominant performance last year the team is unchanged going into 2019.

U25 rider Emily Moffitt and Tipsy du Terral finished on 5 faults with a time penalty.

It was up to team compatriot Ben Maher, on the equine superstar Explosion W, to deliver and he pulled off the clear they needed.

New York Empire
One of the most formidable teams on the starting grid has added strength and depth and it paid off today.

His new teammate Hans-Dieter Dreher and the 11-year-old Berlinda were under pressure to hold firm and they notched up a double clear finishing in 5th position ahead of the final round on Saturday.

Geir Gulliksen and VDL Groep Quatro delivered a punchy clear round full of spirit putting the team into a healthy 4th positive for crunch time for GCL on Saturday.

Paris Panthers
With new Team Manager Rob Hoekstra watching on the Panthers were determined to build on their fantastic third place in the GCL Super Cup Final at the GC Prague Playoffs.

It was up to the seasoned champion Gregory Wathelet to keep up the momentum and he duly delivered with a careful clear round on Qualido leaving the team in 8th place halfway down the grid.