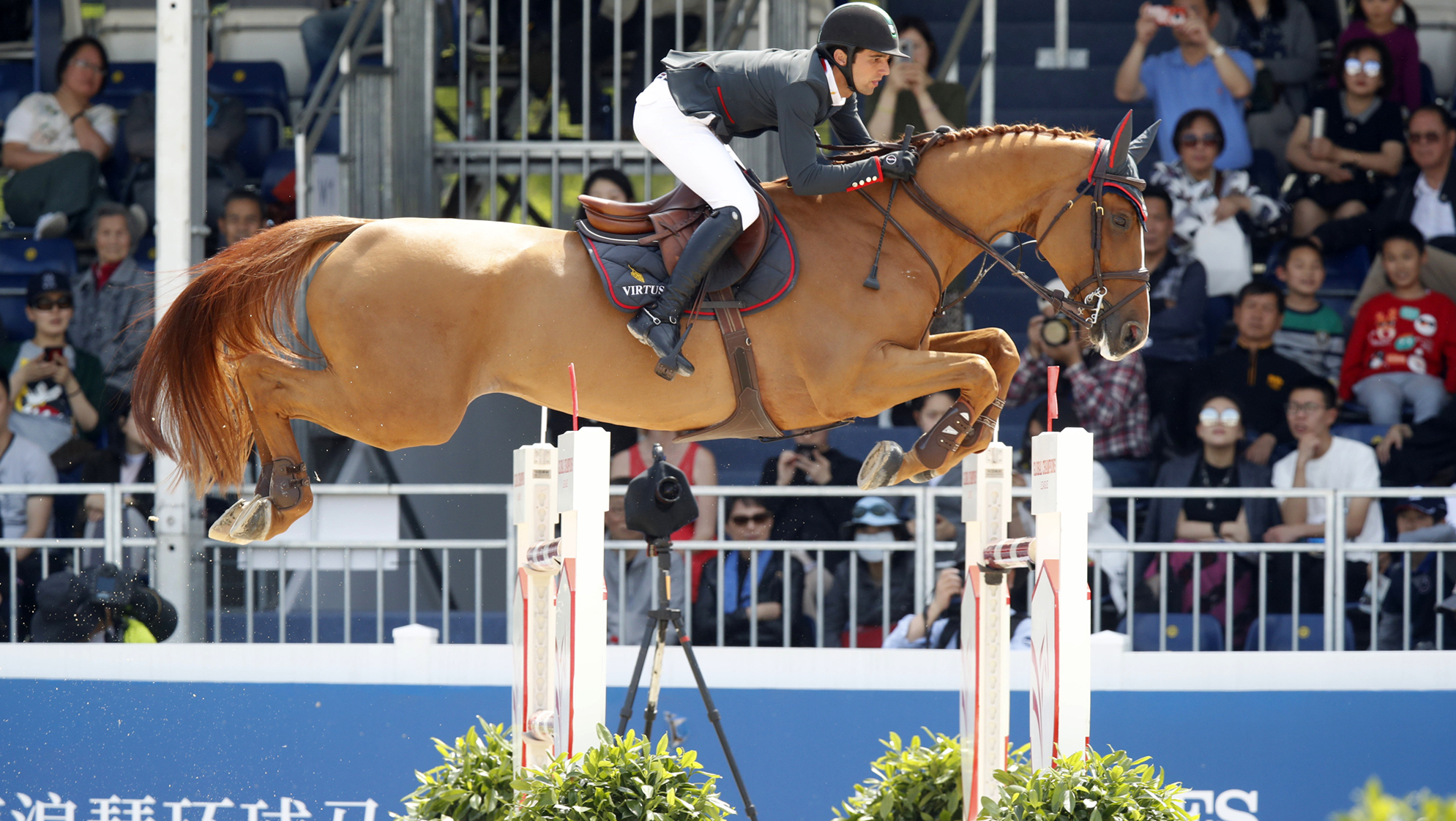 Monaco Aces pulled pole position out of the hat under blue skies in Shanghai, in a sizzling opening class for the GCL team competition and the coveted top spot of last to go in Sunday’s final round.

This imposing venue set in the heart of the colourful and vibrant city of Shanghai’s Pudong district is hosting three days of top class jumping and anticipation mounted as the curtain raised on a day of non-stop action.

Enthusiastic Chinese fans dressed in their beautiful outfits and hats, reminiscent of Royal Ascot, were captivated by top sport featuring global equestrian superstars, as the country commits to new investment and support to grow equestrian sport.

The formidable teams lined up for the fourth leg of the Championship all with their eye on the GCL Super Cup at the GC Prague Playoffs in November and five teams scorched home with a double clear today. But the winning performance came from last-drawn Monaco Aces. The naturally fast duo of Julien Epaillard and Marlon Modolo Zanotelli came home with breathtaking pace to top the leader board after round one.

“I was super happy for today — It’s only half of the job done, but a good day for the team,” said Frenchman Julien Epaillard, who piloted Virtuose Champeix to the team’s opening clear.

His team-mate Marlon Modolo Zanotelli added of his mount VDL Edgar M: “He’s a fantastic horse and just gets better and better — I’m very lucky to have him.”

Also part of the Monaco Aces squad and watching on from the sidelines today was Jerome Guery, who said: “They are both super good riders so I just told them if they could do the same again tomorrow, it would be perfect!”

According to Julien, no tactical team plans had been made ahead of Sunday’s decider.“I think we’ll stick with the same horses though,” he said.

Of the four other teams completing on a zero score, Valkenswaard United sit poised just behind the leaders, with Prague Lions, Hamburg Giants and Paris Panthers hot on their heels with everything to play for in tomorrow’s decider. Even sixth-placed St Tropez Pirates remain firmly in the mix on a team score of four.

Uliano Vezzani designed a technical course of 15 jumping efforts, including three sets of double combinations, around this spacious arena, providing an enticing, up-tempo challenge for this elite field of squad riders. Despite setting what looked to be a relatively tight time allowed, he’d provided plenty of options for snaking inside turns, so the ticking clock played little part but rails fell thick and fast around the track, producing a real mixed bag of scores.

The scores carry through to Sunday’s final round and determine the starting order for what is set to be a thrilling decider.

Here is how the action unfolded…

Miami Celtics
Fresh from their home win the previous week, Miami Celtics had opening draw and it was Shane Breen who launched proceedings with the forward-going Ipswich van de Wolfsakker, bagging a smart clear. Hot on their heels, the relatively new partnership of William Whitaker and RMF Echo succumbed to two rails through the combinations, putting the team on a score of eight.

Shanghai Swans
Representing the league leaders, Pius Schwizer carefully steered the mare About A Dream round the track’s twists and turns, but the planks fell for a four-fault round. An unexpected round followed. Daniel Deusser brought out the 11-year-old Scuderia 1918 Tobago Z and a shock refusal at an early oxer followed by a rail down coming out of the Longines combination, plus a time-fault produced a 13-fault team total.

Doha Falcons
Unfortunately the rails fell around the course for Michael Whitaker and Billy Z producing a hefty score of 21. Second to go, Jur Vrieling and VDL Glasgow v Merelsnest fared a little better, adding just four to make a team total of 25.

Paris Panthers
Under the watchful eye of team manager Rob Hoekstra, Gregory Wathelet rode a careful, steady round on Iron Man van de Padenborre and the tactics paid off, as they nailed a superb clear within the time allowed. Darragh Kenny and Balou du Reventon mirrored the round of his team-mate, surviving a lucky rub of the planks. Another zero score put the Paris Panthers into pole position at this stage with the first double clear of the competition.

Hamburg Giants
Simon Delestre and the tail-swishing grey Filou Carlo Zimequest showed real athleticism round the track for a fast clear. Taking things slightly more steady, his team-mate Bart Bles rode the 11-year-old mare Israel vd Dennehoeve with careful consideration, but squeaked inside the time to post the second double clear of the competition, some 3 seconds quicker than the Paris Panthers to push them to the top of the leader board.

Cannes Stars
The fast combination of Karel Cox and Evert succumbed to a couple of early back rails through the doubles putting eight points on the board. Following up, Abdel Said rode Venise du Reverdy round the quickest route but a rail fell through the early combination to take the team total to 12.

St Tropez Pirates
For the number two-ranked GCL team, Olivier Robert and the scopey 15-year-old Eros came out first, just tapping out the rail on the oxer at fence 5 before reorganising and coming home with just four to add. His team-mate Pieter Devos is the man of the moment as current leader on the LGCT rankings. Riding the talented white-faced chestnut Apart, the pair looked sensational throughout for a brilliant clear, putting the Pirates on a team total of four and just a whisker behind the leaders.

Valkenswaard United
Coming out fighting, Alberto Zorzi and the sharp, feisty mare Ulane de Coquerie survived a lucky rub to post a great, fast clear. Handing over to Marcus Ehning riding Cristy, the outcome was never in doubt as the pair showed such style over the obstacles, bringing home the third double clear of the afternoon and rocketing Valkenswaard United to the top of the leader board, albeit temporarily.

Scandinavian Vikings
First of the duo, Christian Ahlmann and Clintrexo Z hit the plank and immediately added four at the following oxer for an eight-fault round. Bedecked in the squad’s navy and red colours, Leopold van Asten had to ride every fence with VDL Groep Beauty only to hit the vertical coming into the final combination adding four to the team total, making it 12 on the board.

Madrid In Motion
The relatively new partnership of Cindy van der Straten on Urban de Rohan just succumbed to the final oxer when pushing home to make the time, bringing four faults to the table. Following in their wake, Mark McAuley and the agile Jasco v. Bisschop tapped out a rail through the Longines double to put the team on a still-competitive eight points.

Berlin Eagles
First out of the gate for the Eagles, Philipp Weishaupt produced a smooth round with Che Fantastica but racked up 12 faults, a disappointing start. The pressure was on Lorenzo de Luca riding the Stephex Stables’ Ensor de Litrange LXII but they nailed a clear, leaving the squad on 12.

Prague Lions
Making a great first appearance for the Prague Lions, Marc Houtzager and Sterrehof’s Calimero looked calm and considered, showing great scope over the obstacles and soaring over the final oxer for a super clear. Following up, Niels Bruynseels jumped round with the big jumping Delux van T&L, picking up the tempo for a second sensational clear and the fourth double clear of the competition. As second fastest, they were sitting behind Valkenswaard United on the leader board.

New York Empire
In another disappointing blow for New York Empire, Denis Lynch and the smart grey Lukas 1054 were eliminated after a shock run-out at the double followed by a second refusal. This meant the team were out of the competition, but Scott Brash jumped Hello Jefferson for individual classification and completed with eight.

Monaco Aces
From final draw, Julien Epaillard and Virtuose Champeix came home with a breathtakingly quick clear. Last man on the course, Marlon Modolo Zanotelli rode VDL Edgar M also rode with great precision, pushing all the way, conscious of time, and a zero score sent them rocketing to the top of the leader board at the end of round one.